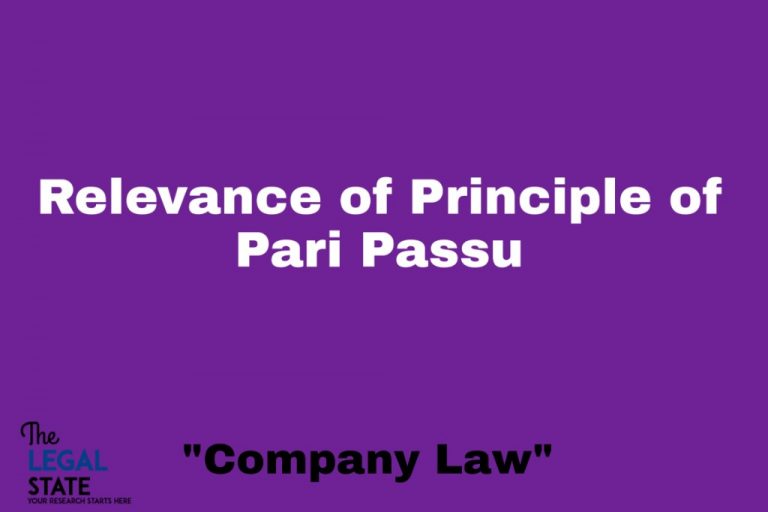 The principle of Pari Passu is applied in insolvency processes, including administration, liquidation, and bankruptcy proceedings. It states that at the time of insolvency, all the unsecured creditors shall be placed at equal footing with each other and there shall not be any preference in the priority of payments to creditors.  This principle works complementary with the principle of pro-rata, which states that the creditors will be paid in proportion to their respectful debts provided to the debtor.

To clarify, the principle of pari passu does not attempt to promote equal payments rather equality of creditors to receive repayment of their debts. The major object of the principle is to strike a balance between the interests of different creditors at the time of insolvency to not allow any creditor to gain an unfair advantage over the debt of others.

In the international financial sector, the principle of pari passu is of most significance for the recovery of corporate credits. The English Law, incorporating the principle of pari passu as earlier as 1542, in the Statute of Bankrupts. In most Common law countries, this principle is regarded as the fundamental policy of insolvency laws. Its application in an agreement or contract implies that a debt shall be treated the same as other debts irrespective of their dates of origin.

Other than a pari passu clause which is between lender and borrower, there also be can pari passu agreement which is between the lenders, to bar any lender from having preference at the time of repayment of the debt during insolvency. The clause is feasible only if it ensures that, on insolvency, the assets of the company will be distributed evenly amongst all unsecured lenders.

Exceptions to the principle of Pari Passu

There are certain exceptions to this principle, wherein pari passu does not apply:

There is a new emerging and much-debated development, application of the pari passu principle to sovereign debts. Although the significance of the clause is most applicable in corporate credit however it has been recently started to be used in sovereign borrowings. Sovereign borrowing is lending between states.

In sovereign lending contracts, a pari passu clause acts as a restrain on the sovereign’s ability to incur debt obligations that could subordinate the right of payment of the other debt. There are certain controversies in the operation of sovereign debt, pari passu clauses, as in a corporate debt the company or individual may go insolvent, and however, a state cannot go insolvent. These questions have been attempted to be cleared through various judicial pronouncements of different countries.

The Indian Law also contains the provision which incorporates the principle of pari passu such as section 73 of CPC, which provides for rateable distribution of payment of money among the decree-holders on an equitable plane.

The principle of Anti-Deprivation is also another doctrine that operates complementary to the principle of pari passu. It states that any agreement or arrangement will be void, which has the effect to remove an asset from the estate of insolvent that would otherwise be capable of realization for the benefit of the insolvent’s creditors.

Relevance of The Principle of Pari Passu

As it is understood, the principle of pari passu signifies that at the time of insolvency, all the unsecured creditors shall be placed at equal footing to any such other creditor, and there shall be no priority in any creditor for the repayment. The payment to each unsecured creditor shall be on a pro-rata basis, which is payment is made proportionally according to the debt of each creditor.

In the contemporary world, the relevance of the principle of pari passu has been questioned. Whether the applicability of this principle, still fundamental to the insolvency proceedings?

Many other such principles have limited the application of the principle of pari passu, however, its relevance has not been lost in the contemporary world. As part of some of these exceptions to the principle, its importance is still the same, in the protection of interest of unsecured creditors in insolvency proceedings.