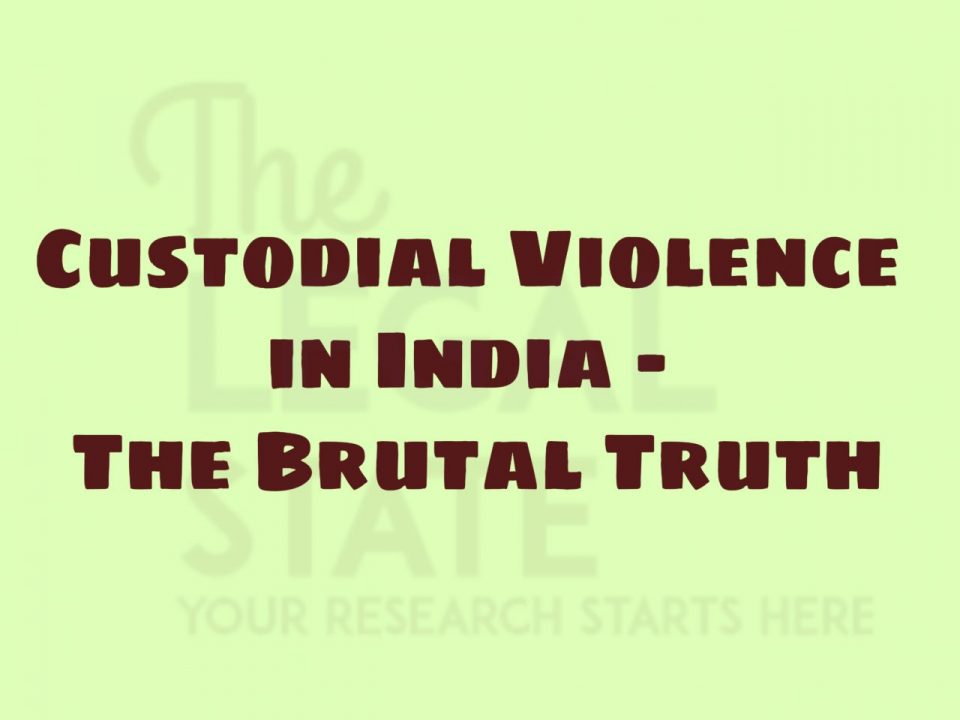 Crime has always been a part of our society, but there have also been systems in place, to prevent its occurrence. A situation wherein people responsible for maintaining order and obviating crimes fall to the perpetrating side of it is a major setback. This not only shakes our very faith in democracy but also makes us question our belief in humanity. One such dreadful form of crime is that of custodial violence. Custodial crimes are deviant desires on the part of those in control to exhibit a sense of superiority by causing harm when there is no chance of retribution. These crimes are aspersions to any and all forms of basic human rights and dignity.

Custodial violence isn’t very recent in India. There have been several complaints of police impropriety and torture of suspects while in custody in the past. These range from instances of petty corruption to custodial deaths and rapes. Over the years, the portrayal of such cases in the Indian entertainment industry has also led to the desensitization of the public towards this issue. Custodial crimes and extra-judicial killings often termed as “encounters”, have not only been normalized by the entertainment industry but have also been glorified by the public in recent times.[1]

Viewers tend to encourage acts when the lead actor commits crimes to punish those suspected. Violence by the police has become the norm and the convention to the point that our society as a whole has been desensitized to custodial crimes unless they are majorly horrifying. Only the most heinous crimes gain attention by media, for instance, the recent alleged custodial deaths in Tamil Nadu in June 2020 wherein the father-son duo was subjected to incessant torture in prison for keeping their mobile store open 15 minutes past the curfew.[2]

Undoubtedly, violations of human rights under the pretense of social order are one of the worst crimes in society. Torture in custody puts victims in a state of immense psychological trauma and gravely harms their mental health. It not only harms them physically but also leaves them in a constant state of helplessness and instability.

As rightly stated by Dr. R. Thilaraj, “In polity, i.e. in a good form of democracy, the role of the investigator, the prosecutor, the adjudicator, and the executor cannot be combined to prevent the likelihood of institutional bias in one person or institution.”[3] Only when each of these associations works individually in an efficient and systematic manner, can justice for human rights truly prevail.

Three broad reasons for the ever-increasing number of custodial deaths in India are torture in custody – physical, psychological or sexual, negligence by medical personnel, and excessive trauma leading the victim to take his own life. Statistics relating to custodial crimes are constant reminders that shed light on the fact that there exists a need for better legislative measures to combat this crime, and it is imperative that the root cause be taken into consideration.

The police system in India is undeniably captured by the elites in politics and is, without a doubt, majoritarian in nature. Active participation in and propagation of all forms of institutionalized marginalization is prevalent in these organizations all over the country. The problem is furthered when this marginalization takes the form of police brutality and custodial crimes against certain communities.

According to a report by the NCAT[4], in 2019, around 60% of custodial death victims belonged to poor and marginalized communities. The very fact that a majority of these crimes are perpetrated on persons from weaker sections of society, the poor and downtrodden who have little to no financial or political power, should be a major cause of concern.

Such persons are arrested and kept under custody for days where they are subjected to torture with no official entry made in any police record. In cases where the incessant torture leads to death, the body is often cremated or disposed of surreptitiously to defend personnel. Moreover, owing to poverty and illiteracy, not much action is taken by relatives of the victim.

Referring to some recent cases of the unjustifiable injustices subjected upon people in these communities, in July 2019, a Dalit woman in Rajasthan was allegedly gang-raped and subjected to torture by the police after she witnessed the custodial death of her brother-in-law in relation to a theft case.[5]

Further, in the same year in August, the police picked up 12 suspects in a theft case from Nat Bajaniya, a de-notified tribe in Gujarat, and allegedly tortured them for over 12 hours led to the death of a 65-year old in custody. The men stated that they were continuously beaten up and made to perform oral sex on each other before the police coerced them to confess to the theft and sign on some documents.[6] T

hese cases are only a minor depiction of the utter disrespect to human dignity and the kind of abuse faced by people in marginalized communities on a daily. This, however, is not only a recent issue – cases of police brutality against underprivileged classes have long existed.

In an investigation led by Arun Shourie in 1980, he noted, “The victims were invariably poor. Several of them were hauled in on no formal charges at all. Even in the case of persons who were arrested, in an overwhelmingly large number of cases they are all accused of petty offenses.”[7] It is of immense shame that this horrendous situation, clearly, still persists in India in 2020.

3. Women and members of the LGBTQ+ community

Apart from custodial violence against people from marginalized communities, another segment that faces these injustices is women and persons of the LGBTQ+ community. They have, for years, been victims of sexual assault or been subjected to torture, beatings, and rough handling by prison officials.

Custodial rape is truly one of the worst forms of torture perpetrated on women in custody by law enforcement personnel, yet, these crimes are reported far too regularly in India. Sexual assault or rape in custody is not only violative of personal integrity, but it also seriously harms the victim physically and psychologically.

Some recent incidents portray this harrowing reality which goes on to show the blatant neglect of rule of law as well as intrinsic human dignity. For instance, in 2004, Kokila, a member of the transgender community was being assaulted by men on the street before two policemen arrived and took her to the station.

Instead of processing a complaint or administering a medical examination, the police raped her for hours in custody.[8] Another traumatizing case was in November 2010, when two girls were allegedly gang-raped one by one by 4 policemen inside the station premises in Chhattisgarh.[9] Further, in February 2019, a 40-year old woman was allegedly taken to the station under the pretext of offering her a job where she was beaten up with her hands tied to a rod. She also accused the police of forcing her to sign an undertaking that the wounds caused by the torture were old ones.[10]

Individuals from underprivileged communities, women, and members of the LGBTQ+ community have, for decades, been subjected to unwarranted abuse in custody by police personnel. These issues highlight the urgent need for police reforms in our country heralded by the Prakash Singh case[11] wherein the Supreme Court discussed the nature and extent of the special responsibilities of the police towards the weaker sections of the community. Further steps to ensure prompt action to safeguard their rights and interests were also suggested.

The most recent case of custodial torture that took place in June 2020 in Tuticorin, Tamil Nadu sparked anger across the country. 59-year-old Jayaraj and his son Fenix were arrested for allegedly keeping their mobile store open beyond permitted hours due to the COVID-19 induced lockdown. Even though their offense would have attracted only Section 188 of IPC, they were also booked under Section 383 and Section 506(ii).

The inclusion of non-bailable offenses for simply keeping a shop open for 15 minutes beyond curfew hours is a clear indication of a prior desire to cause suffering. It is alleged that the father-son duo was brutally thrashed, sodomized, and tortured by the police while in custody so much so that they had to change their blood-stained ‘lungis’ around 7 times in a period of 5 hours.

Given the virus outbreak, they were made to stand 50 meters away from the Magistrate who allegedly remanded them to judicial custody without the requisite medical examination. The two passed away three days later within hours of each other at a general hospital in Thoothukudi. Since then, amid pan-India outrage, both offline and on social media, the Tamil Nadu SHRC and the Madurai Bench of the Madras High Court took suo moto cognizance of the offense.

Thereafter, the CBI took over and 6 officers have been charged with murder. In pursuance of the same, a plea was filed in the Supreme Court by senior advocate Dr. Abhishek Singhvi, who was the amicus curiae in the D.K. case. The plea highlighted the “increasing trend of normalizing custodial deaths” that demands a “robust, uniform, effective and working investigation and mortaring apparatus”. This case in 2020 is unfortunate proof of the stark difference between legal theory and the ground reality.

Police brutality continues to remain unabated even today, with numbers increasing each day. Escalations in such cases are mere proof as to how past precedents, as well as the legal system, fail to curb violence in custody. Truly, among human rights violations, no practice is more degrading and irreversible than extra-judicial killings – the taking of a person’s life without minimal guarantees of due process of law.

Encounter killings are often heralded as ‘instant justice’; however, this simply is not the case. It is pertinent to note that there is no provision in the law that directly authorizes an official to encounter a criminal irrespective of the grievousness of the crime committed. It is immensely despicable that there exists an utter disregard for due procedure and that such offenses still take place.

Despite the several existing legal provisions, the compounding number of cases of custodial violence in recent times is proof that absolute ground-level implementation of prevailing provisions, as well as more stringent and effective mechanisms to combat the brutality in custody, need to be set in place.

Considering the alarming increase in the number of custodial violence cases, it is imperative that those in charge show respect for human dignity, and not take law into their own hands. Custodial violence is, indeed, “a calculated assault on human dignity”.[12] As stated by Justice Suresh, a retired judge of the Bombay High Court:

“They kill, they decide, and they justify – the police become the investigator, the prosecutor, and the Judge!”

Such a situation of multiplicities of custodial crimes should not exist in society today. The ideal way to make amends and ameliorate this situation is when due process is followed, improved accountability mechanisms are set in place, and officers responsible for custodial crimes are penalized. There exists a pressing need to pay conscious attention and implement all required measures to ensure that basic human rights are not flouted by those responsible for maintaining law and order in society – instances that cast doubts on our belief in democracy.

[10] Special Correspondent, “Protest outside the apartment after maid alleges torture by police” The Hindu, Feb. 18, 2019. https://www.thehindu.com/news/cities/bangalore/protest-outside-apartment-after-maid-alleges-torture-by-police/article26298836.ece