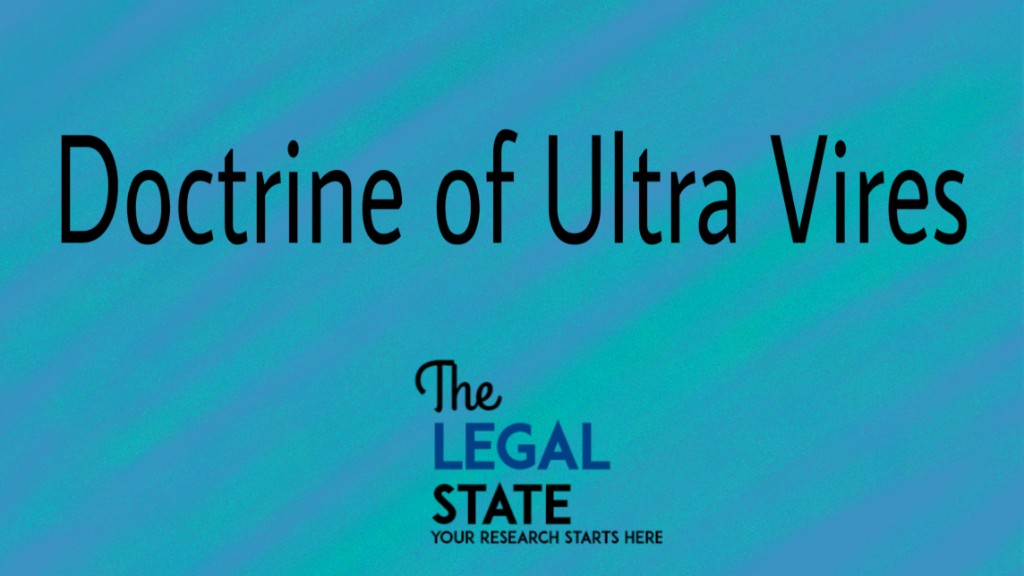 The doctrine of Ultra Vires

The word Ultra vires literally mean beyond the powers. When a company or its directors violate the provisions of the Act or any other law, such an act is unlawful and attracts penal liability. In such a case, the act cannot be ratified even with the consent of all the members. It means when the has exceeded its memorandum (constitution of the company). It does not bind company powers derived by the company as it is void. The company cannot act or exceed its authority ultra vires the memorandum. However, when the directors exceed their authority, the company may ratify them. This concept is known as the doctrine of ultra vires

The object of the Doctrine of Ultra Vires:

The object of the doctrine of ultra vires is two-fold, namely,

(i) to protect the investor (so that they may know for what purpose their money will be employed);

(ii) to protect the creditors (so that the fund to which they must look for repayment is not dissipated (incurred) in unauthorized activities).

Corporate life cannot be spent for any purpose other than those specified in the memorandum.

The object of the company was inter alia to build railway coaches. The articles empowered the directors to carry on any object provided a proper resolution was passed. The company entered into a contract to construct a railway line in Belgium. This act of the directors was ratified by resolution. Riche brought an action for damages for breach of contract against the company, subsequently, repudiated the contract as ultra vires, Riche contended that the contract was ratified by a majority of shareholders.

The main object for which the company was formed had become impossible when the company could not get the German patent. Therefore, it was just and equitable that the company should be wound up on the

(a) necessary for, or

(b) incidental to main objects, or

(c) which is otherwise authorized by the Act.

The doctrine of ultra vires has been affirmed by the Supreme Court in its decision.

The appellants were directors of United India Life Insurance Company. They were also trustees of a trust to be formed. The company passed a resolution whereby a sum of Rs 2 lakh was given as a donation to the trust. When Life Insurance Corporation took over the life insurance business it was found that the transaction was ultra vires the company. The trustees were asked to refund the amount. The Court held that the directors could not spend the company’s money on any charitable or general object which they might choose.

However, they can spend for the promotion of only such charitable objects as would be useful for the attainment of the company’s own objects. Similarly, the directors have no power to distribute the money received on the sale of its assets as compensation to the employees who had lost their jobs.

(1) Injunction: Any member of the company can get an injunction to restrain the company from proceeding with an ultra vires act which has been, or is about to be, undertaken.

(3) Breach of Warranty of Authority: The directors of a company are its agents. They must act within the scope of their authority. Otherwise, they will be personally liable to the third parties for breach of warranty of authority.

The directors of a railway company invited proposals for a loan on debentures. The directors by inserting the advertisement had warranted that they had the power to borrow, which they did not in fact possess. Their warranty consequently was broken and they were held personally liable.

(4) Ultra Vires Acquired Property: If any property is purchased by a company spending the money unlawfully beyond its powers, the company is entitled to claim right over that property even if it acquired the property ultra vires.

(5) Ultra Vires Contract: Any contract made outside the abject of the company as defined by its memorandum is wholly void and has no legal effect. An ultra vires contract is void ab initio. It cannot become intra vires by reason of estoppel, the lapse of time ratification, or delay.

Ultra Vires Torts: Any person dealing with a company may be required to acquaint himself with the company’s memorandum. A company will be held liable for any tort if it is shown:

(1) that the activity in the course of which it has been committed falls within the scope of the memorandum, and

(2) that the servant committed the tort within the course of his employment.

Since the rule of ultra vires is resulting in occasional injustice, the Cohen Committee 1945 recommended its abolition. According to it, the doctrine of ultra vires was not based on any dogmatic concept of the liability of a company. According to it, every contract made on behalf of the company should be valid even though it is made beyond its powers. However, the directors should be held liable if it involves a misapplication of corporate capital.

This form has been adopted by the European Communities Act, 1972. According to it, a company will be responsible for every act decided by the directors of the company, and a person acting in good faith can sue the company.