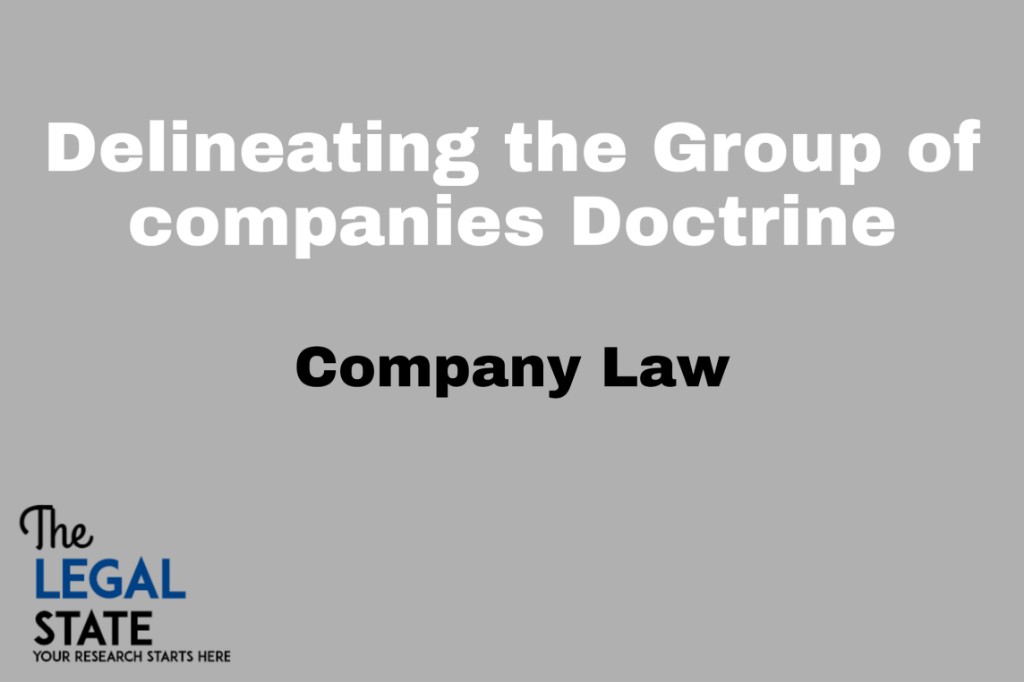 The group of companies doctrine has been struggling over the years in its implementation in India due to jumbled-up jurisprudence. The author has tried to bring clarity and suggested some reforms through amendments in some sections

Introduction to the Group of Companies Doctrine

While considering the major facets of arbitral proceedings, mutual consent or ‘consensus ad idem’ cannot be taken for granted since there must be a meeting of the minds to opt for arbitration in case of a dispute. For a fair adjudication, it’s pertinent to think over other doctrines too such as the doctrine of ‘group of companies that have consistently been struggling over its validity throughout the jurisdictions.

The group of companies doctrine allows non-signatory parties to participate like a signatory or party to the arbitration. It’s a vital doctrine but sadly its importance has been undermined. Since its enactment itself in 2012, the Indian judiciary has never used this doctrine entirely. Courts have either used its particular parts ignoring other content or just applied it with other doctrines.

Also, the interpretation of Indian courts has further given rise to new problems due to insubstantial relations with mutual intent which further results in jumbled jurisprudence. Moreover, this doctrine seems to be contrary to the orthodox rules and regulations that have been administering the entire legal system for a long time. Subsequently, it’s obvious to have debates and discussions because of diverging viewpoints since some researchers think this doctrine dissolves the very importance of the ‘consent’ of parties.

This doctrine was first espoused in Chloro Controls (I) P. Ltd. v. Severn Trent Water Purification Inc. & Ors, where parties built a joint venture company for the supply of chlorination in the country. The problem arose when the main company started distributing through non-signatory companies too and the matter reached the Supreme Court where the respondent party submitted that ‘they are the parties claiming through or under the signatory under section 45 of the arbitration act’. Further, the court highlighted that intention to consider a non-signatory company is a pertinent requirement that needs to be considered while using this doctrine.

However, factors such as the ‘direct link between the signatory and non-signatory party’, ‘shared cohesion of the main objectives’, ‘combined transactions between the parties, and whether the conflict would be solved by serving the justice are equally important and this constitutes the threefold test requirement essential for this doctrine.

The necessity of the Group of Companies Doctrine

The case of Chloro Controls came as an aftermath of the landmark Supreme Court judgment Sukanya Holdings Pvt. Ltd v. Jayesh H. Pandya & Anr. which held that (i) arbitration cannot be made applicable if some parties are not the part of the agreement; and (ii) as the division of causes of action or parties was not permissible, further asserted that arbitration wouldn’t be possible even between the signatories. The case of Chloro Controls has been proved as the panacea of the abovementioned lacunas. The Chloro Controls allowed arbitration in cases where multiple interrelated agreements were involved. This step enhanced the efficiency of arbitration since parties wouldn’t indulge in multiple proceedings and conflicts.

The precept set down in Chloro Controls was acquired from various international judgments, though Supreme Court took the contrary position as taken by most of the countries like England. This doctrine is contrary to the other legal frameworks of the country like privity of contract, party consent to arbitrate, etc. The way in which this doctrine was adopted by the Supreme Court has only aggravated the challenges in applying this doctrine in India.

For example, in Cheran Properties Ltd. v. Kasturi and Sons Ltd. and Ors., this doctrine was used to impose an award against a non-signatory party despite the fact there was no combined transaction and even non-signatory party didn’t intend to join as a party in the arbitration.

The same happened in Ameet Lalchand Shah and Ors. v. Rishabh Enterprises and Anr., this doctrine was used to include non-signatory parties to the arbitration even though parties were not included in the same corporate group. The focus was entirely on interrelated agreements for a single project but in Mahanagar Telephone Nigam Limited v. Canara Bank, the court further added other factors like ‘tight group structure’ and ‘financial links’ to constitute a single unit.

These additions by Supreme Court put the high court in an impasse while applying this doctrine. High courts have often used this doctrine without giving much consideration to mutual intent if other constituents were satisfied.  For instance, in Magic Eye Developers Pvt. Ltd. v. Green Edge Infra Private Limited, the court gave very little focus on determining the intent while making non-signatories a part of the arbitration.

Firstly, the implementation of this doctrine is prone to overlooking the very essential element of arbitral proceedings that is consent since the non-signatory parties may be forced to join the proceedings without their consent. Determining the intent includes thorough scrutiny and analysis of facts in arbitral proceedings under sections 8, 9, and 11 of the act which deal with prima facie assessment only.

Secondly, this doctrine has been misunderstood or not applied correctly. Often in most cases, it has been combined with other legal frameworks like alter ego and lifting of the corporate veil. However, such legal frameworks are additional rationales to back the reasoning of doctrine but they are often used to limit the risk and liability which isn’t the main purpose of these legal personalities.

Thirdly, in most cases, courts have given very little focus to mutual intent owing to insubstantial links like the use of the same email id, contact numbers, letterhead, etc. The involvement of these insubstantial links often undermines the actual commercial reality and connections of business transactions.

Though there’s still inconsistency in the application of this doctrine across various courts, its importance shouldn’t be undermined considering that some courts have struck the right chord by carefully examining the essential elements like mutual intent and consent. There’s a need to clear this ambiguity and widen the scope of the definition of ‘party’ through amendment in section 2(1)(h) of the arbitration act.

The recommendation of the 246th law commission report that sections 2(1)(h) and 8 of the act must include the ‘persons claiming through or under a party to the agreement.’ By widening the scope of the definition of ‘party’, non-signatories will also be included and it would be consistent with Chloro Controls.

On a better side, section 2(1)(h) should make it clear that third parties would be included if there’s major involvement and direct benefit conferring on them otherwise they shouldn’t be made a party to arbitration without their consent.

For example, in Ameet Lalchand Shah or RV Solutions, third parties or non-signatories were also dragged to arbitrate just on the basis that they belonged to the same interlinked connection. It created much chaos and difficulties in arbitral proceedings. So whenever, multiple members are involved owing to interlinked transactions, legal personalities like alter ego and lifting of the corporate veil should be made available. Further, parties can also safeguard themselves by explicitly mentioning in their contracts that parties in the arbitration would only be signatories and direct benefit would be conferred only to the signatories.