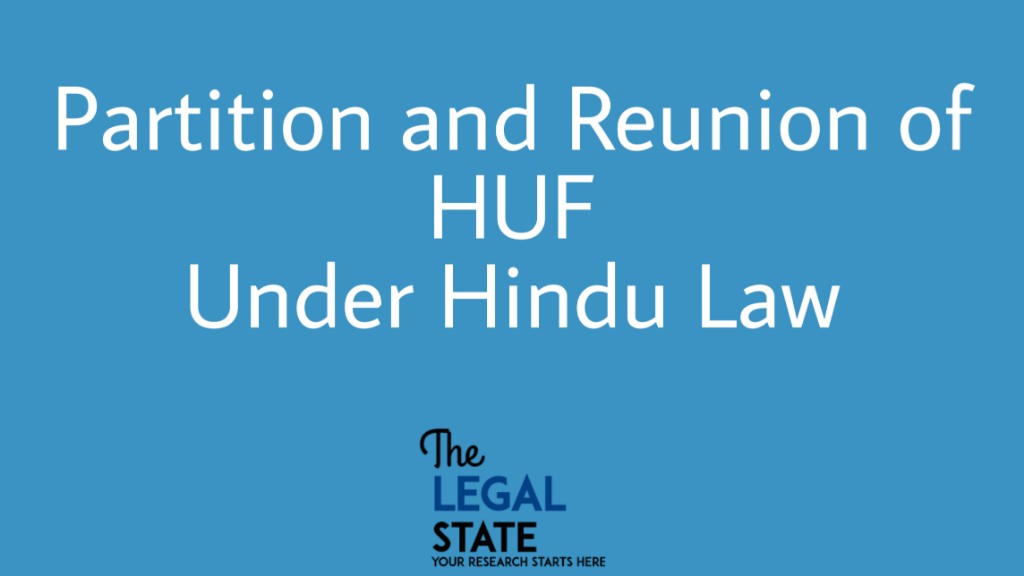 Partition and reunion of HUF Under Hindu Law

Partition may be either voluntary or compulsory. Voluntary partition is when all owners agree to divide the property themselves. In such a case, each co-owner owns a part of the property and ceases to have an undivided interest in the whole. When the co-owners cannot agree to a voluntary partition, a suit has to be instituted to compel the partition to sever property interests. In such a case, the partition must be made even if every other owner objects to it. A tenant in common or a joint tenant has the absolute right to seek a compulsory partition.

According to the Mithakshara school. partition is the ascertainment of individual rights in a joint family. The interest of the coparcener is not a definite interest until a partition takes place. The coparcener should not be able to alienate his share till partition. A coparcener cannot validly dispose of his coparcenary interest by will except when he is the sole surviving coparcener. A Mithakshara coparcener may wish to execute a will. He may desire to prevent the operation of the rule of survivorship. So on his death, his interest in the family property might devolve on his own heirs. The easy way of getting divided from the joint family is a unilateral declaration of division in status. It has been clarified in the following case.

There were two coparceners A and his brother’s son B. A executed a will. He declared that he had resolved to become separated from B. A sent a written notice to B to become separate was mentioned. But 4 died before B received his notice The legatees under the will claimed the property. This claim was resisted by B. B contented that by the rule of survivorship, he was entitled to the property The question was whether the will executed by A was effective. It would be effective only if before his death, A had become divided in status.

When it is communicated, it becomes effective with retrospective effect. It means, from the date the intention was manifested There is no division in status, if he dies before the intention is communicated In this case, he did not die as a divided member. This rule of survivorship operated. Hence, his will was ineffective In the case of a minor coparcener. his guardian may make the unilateral declaration on behalf of the minor. However, it is for the Court to determine whether it was beneficial to the minor or not.

According to Section 6 of the Hindu Succession Act. 1956, where a Hindu male dies intestate on or after 17th June 1956. having at the time of his death an interest in a Mitakshara coparcenary property leaving behind a female heir of the class-l category, then his interest in the coparcenary property shall devolve by succession under that Act and not by survivorship. The interest of the deceased will be carved out for devolution as if a notional partition had taken place before the death of the deceased. This is the concept of notional partition

What is the Effect of Partition?

The effect of partition can be discussed under two heads:

The general rule is that once a partition is affected, subsequently of partition does not arise. According to Manusmriti also, partition in a joint family can be done once only, However. there are some exceptions to this general rule.

However, it is to be noted that in the case of a son born as well as begotten after partition, if his father has taken a share for himself and separated from the other sons, then the after-born son is entitled to his father’s share at the partition and also his separate property to the exclusion of the separated sons and is not entitled to reopen the partition.

After the partition, if the coparcener’s widow makes an adoption, the adopted son could reopen the partition, He can do so only when his share has not been allotted as such adoption relates back to the date of his father under the Adoption and Maintenance Act, 1956.

If the minor coparcener’s interest is not properly safeguarded, he may ask to reopen the partition.

The partition can be reopened if the partition was spoiled by fraud. But the actual fraud must be discovered.

Reunion means rejoining as a joint family after the partition is made. The Dayabhaga school and Dravida school permit reunion after partition. However, parties to the reunion must be father and sons, brother’s paternal uncle, and nephews. The reunion is also permissible under the Mayukha and Mithila schools. But reunion parties must be parties to the original partition.

The Supreme Court held that for a reunion there should be an express or implied agreement between the parties to a reunion in an estate. The policy of the law is sound and for the reasons that the Hindu joint family is described as an institution. Partition and reunion after partition should not be restricted because they affect the status and the strength of the interested parties in such institutions.

Who is entitled to demand partition?

Partition is a process in which, and by which, a joint enjoyment of the property is transformed into enjoyment in severalty among sharers. Any division of property between co-owners, resulting in individual ownership of the interests of each, is a partition. On partition, the joint status comes to an end, and it gives existence to nuclear families or different joint families.

The partition of a joint Hindu family may have resulted at the instance of the following persons:

Sons And Grandsons (Son, a Grandson and Great Grandson)

According to the Mitakshara grandson, as well as every other adult member of the can demand a partition. The consent of the other members is not a son, a grandson, and a great coparcenary necessary. The Supreme Court in Puttorangamma v. Rangamma [AIR 1968 SC 1018] held that a suit for partition and separate possession of ancestral joint family properties by one of the coparceners is maintainable even if their father is joint with his brother and is not willing and does not consent to such a partition.

A son can demand partition during the lifetime of his father’s hindrance. This view was again supported by the Bombay High Court in its latest pronouncement.

Since adoption is permitted in Hindu law, an adopted son is entitled to demand a partition any time after adoption as if he is a natural son of the family. If a natural son is begotten after the adoption although the adopted son was to be treated at par with the wife and the natural son, yet the quantum of his share in the joint family property differed in different schools. The Hindu Adoption and Maintenance Act, 1956, has removed the discrimination so that the adopted son gets an equal share to that of the natural-born son on the partition.

The right of partition of after-born sons can be discussed under two heads:

Son in the Womb of His Mother

A minor coparcener is also entitled to demand for partition in case the joint status does not remain beneficial to his interest. He cannot institute a suit directly as he is a minor. However, his minority or the minority of other members of the family would not be a hindrance to demand for a partition by him. If the partition has already taken effect detrimental to his interest, he could challenge it on attaining majority.

An alienee of a coparcener’s interest has a right to demand However, he cannot claim such right in all cases. He has entitled if the transfer is valid. In Smt. Kailashpati Devi v. Smt. Bhuwaneshwari Devi (AIR 1984 SC 1802], the Supreme Court held that the purchaser of joint family property from a member of a joint Hindu family may have the right to file a general suit for partition against the members of the joint family and that be the may adopt to effectuate his purchase. the proper remedy for him to

A widow is not a coparcener under Mitakshara law. She can still claim for a partition of the joint estate under the Hindu Womens’ Right to Property Act, 1937.

For the purpose of the right to partition, female sharers, include (1) the wife, (2) widowed mother, and (3) paternal grandmother. In general, these female sharers have no right to demand a partition. However, they are entitled to get their share when the joint family property is actually divided on a partition.

Where a suit for partition filed by a coparcener has been withdrawn, the female sharer will not be entitled to continue the suitor to press a demand of his share. Further, it is to be noted that the female sharers would not be entitled to any share in the property so long the actual partition is not affected. Section 23 of the Hindu Succession Act, 1956, postpones the right of female heirs to claim partition of the dwelling house until the male heirs choose to divide their respective shares therein.

Does partition amount to a transfer of property?

Partition is a process in which, and by which, a joint enjoyment of the property is transformed into enjoyment in severalty among sharers. No outsider enters in such a process. Such a process cannot be considered as a transfer of property Act. property within the meaning of the

In the case of CED v. Kanhlal Trikamlal [[1976] 105 ITR 92, 101 (S.C.)], it was observed that partition is really a process in which and by which a joint enjoyment of the property is transformed into enjoyment in severalty. Each one of the sharers has an antecedent title, and therefore, no conveyance is involved in the process, as confirmation of a new title is not necessary. This decision is an authority for the proposition that no conveyance is required for a partition, but not for whether there is a transfer involved in a partition.

In the case of Kalooram Govindram v. CIT [1965] 57 ITR 335 (S.C.), the Supreme Court did not give any opinion as to whether a partition constitutes a transfer within the meaning of the Transfer of Property Act. But according to Andhra Pradesh High Court, in the case of Dwarka Prasad v. CED [1968] 67 ITR 281 (AP), the Supreme Court in 57 ITR 335 has given final authority that in partition there is no transfer.