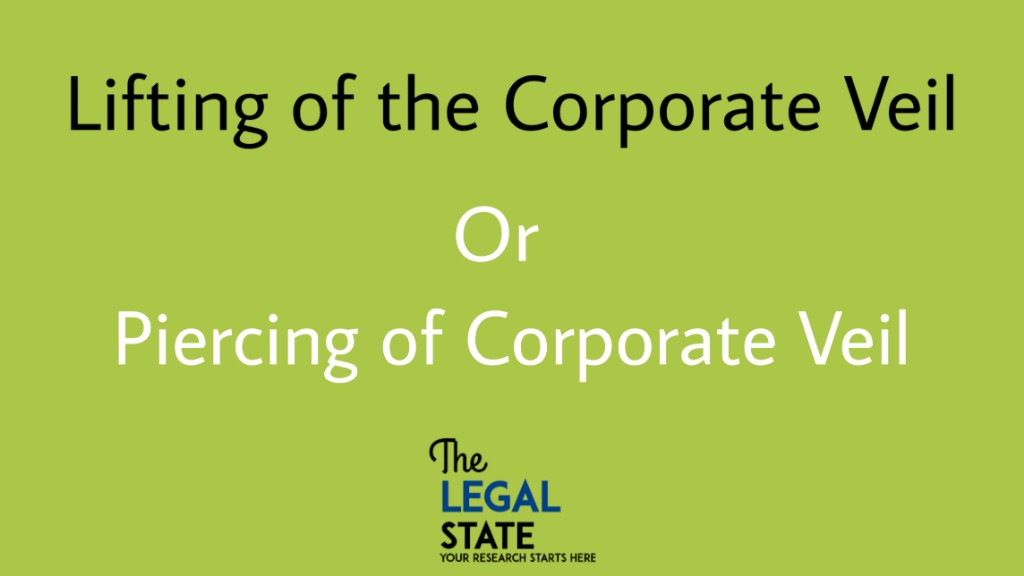 A company is an artificial person by the process of law. It is a separate legal entity distinct from its members, after its formation and registration under the Act.

The separate personality of a company is a statutory privilege and it must be used for legitimate business purposes only. Where a fraudulent and dishonest use is made of the legal entity, the individuals concerned will not be allowed to take shelter behind the corporate personality. The Court will break through the corporate shell and apply the principle/doctrine of what is called as “lifting of or piercing the corporate veil”. The Court will look behind the corporate entity and take action as though no entity separate from the members existed and make the members or the controlling persons liable for debts and obligations of the company

Salomon v Salomon & Co. Ltd (1897] AC 22 is a landmark company law case that took place in the United Kingdom. The effect of the Lords’ unanimous ruling was to uphold firmly the doctrine of corporate personality, as set out in the Companies Act, 1862, so that creditors of an insolvent company could not sue the company’s shareholders to pay up outstanding debts.

Aron Salomon was a successful leather merchant who specialized in manufacturing leather boots. For many years, he ran his business as a sole proprietor. By 1892, his sons had become interested in taking part in the business. Salomon decided to incorporate his business as a Limited company, Salomon & Co. Ltd. At the time of the incorporation of the company, at least seven persons have to subscribe as members of a company, that is, as shareholders. Mr. Salomon himself was managing director. He owned 20,001 of the company’s 20,007 shares – the remaining six were shared individually between the other six shareholders (wife, daughter, and four sons).

Salomon sold his business to the new corporation for almost £39,000, of which £10,000 was a debt to him. He was thus simultaneously the company’s principal shareholder and its principal creditor.

When the company went into liquidation, the liquidator contended that the debentures used by Salomon as security for the debt were invalid, on the grounds of fraud; Salomon was not a genuine incorporator. The House of Lords unanimously overturned this decision, rejecting the arguments on the grounds of agency and fraud. Salomon followed the required procedures to set the company; shares and debentures were issued.

The Court in Lee v. Lee’s Air Farming Ltd [1960] 3 All ER 420 also observed that companies can contract with their members, directors, and outsiders. In that case, Mr. Lee’s accountant formed a company (Lee’s Air Farming Ltd.), and Mr. Lee was the principal shareholder as also the governing director of this company. The company contracted with farmers to perform aerial topdressing. Mr. Lee worked for the company as a pilot and received a wage for that work.

In a work accident, Mr. Lee died; then his wife claimed on a workers compensation insurance policy that the company’s solicitor had taken out naming Mr. Lee as an employee. The insurer denied liability on the ground that Mr. Lee could not be a servant because he was a director of the company. The Judicial Committee of the Privy Council upheld the claims made by Mrs. Lee and firmly rejected the insurer’s argument.

The Court held that the Company and its members are different persons. A company is a separate entity and cannot be found acting as an agent for a member.

Generally, no authority can interfere to look behind the legal facade. It means the corporate personality prevents everybody from interfering with the internal management of the company. Thus, it creates an inherent danger and may affect the revenue of the state and the interest of its members. In such a case, the theory of lifting the corporate veil provides protection and prevents the abuse of corporation devices.

The theory of corporate entity is the basic principle on which the whole law of corporations is based. In reality, the business of the artificial person is always carried on by and for the benefit of some individuals. Sometimes certain factors may break down the corporate insulation. But, it is impossible to ascertain the factors which operate for such breakdown. In such circumstances, the Courts and legislature may interfere to determine the factors by lifting the corporate veil.

Circumstances in which corporate veil can be lifted:

(2) for the benefit of revenue

(3) to prevent fraud or improper character

(4) agency or trust and government companies

(5) reduction of membership below the statutory minimum

If a company enters into a contract with a friendly company situated in another country, subsequently if it becomes an enemy alien on account of outbreak of war between the two countries the contract becomes void. To find out its character, one has to look behind the company and find out who are controlling the company.

Continental Tyre Co. was a company incorporated in England but the company was controlled by the German residents. It used to sell the tyres manufactured in Germany by a German company. The directors were Germans, residents of Germany. Coming to the holders of the remaining shares except one were also Germans, residing in Germany. During the First World War, the filed a suit against the Daimler Co., for the recovery company of trade debts.

Though the controlled by enemy aliens, that is to say, Germans. Hence, to find out the true character of the company was incorporated in England, it was company, the corporate veil should be lifted.

(2) For the Benefit of Revenue:

Where a company was formed for the purpose of avoiding taxes such as income-tax or super-tax, the Court may disregard corporate entity to prevent tax evasion or to circumvent tax obligation. Under Section 179 of the Income-Tax Act the corporate veil can be lifted in the interests of revenue and to hold the directors liable personally for the payment of such tax.

A was an income-tax assessee. His income consisted of dividends and interest. He formed four private companies. The incomes were in the name of the companies but held back by him as an agent as a pretended loan.

The Court held that the companies and the assessee were not two different i They were created solely for the purpose of enabling the assessee to avoid persons. The companies had not done any business. super-tax. Tax planning might be legitimate provided it is within the framework of law. The four companies were formed for the sole intention of tax evasion or circumventing. In such cases, the Court may ignore the status of separate legal entity of a if it is used for tax evasion or reduction of tax liability. company

Prevention of Fraud or Improper Character:

Where any company has been formed to defeat or circumvent law, to defraud creditors to avoid legal obligations the court can ignore the corporate personality to find out the improper conduct of the company. In such cases, the Courts can lift the veil to do justice to the creditors or to enforce legal obligations.

‘B’ was in the employment of ‘A’. During employment ‘B’ covenanted with A that he shall not practice a rival trade and solicit the customers of ‘A’. ‘B’ in order to escape the legal obligation and carried on the rival trade. The formed a nominal company company was a mere show for the of his agreement. It was used mere channel for his own benefit, with a view to obtain the advantage of the customers of the plaintiff company. Thus, the defendants created a new company for the purpose of defeating the pre-existing legal obligations.

In such cases, the Court can look into the reality of situation purpose of committing breach orders restraining ‘sham company’ from practicing the pue pass rival trade. The Court held that the corporate entity or device cannot be used as a mask to escape legal obligation. The court granted an injunction restraining ‘B’ and his company, with proceeding in the competing trade.

Agency or Trust and Government Company:

The Board of Trade in England refused to recognize it a British film. In such cases, the Couts can lift the veil of the company to find out the true relationship and can make the members liable or can destroy the company itself as a sham company as in the case of Gilford Motor Company.

Reduction of Membership below the Statutory Minimum:

Where, the number of members falls below the statutory minimum, that is to say, less than two in the case of a private company and seven in the case of a public limited company and carries on business for more than six months, if the number so reduced and the remaining members are aware of the reduction and carry on business, the remaining members become personally and severally liable. It becomes one of the grounds for winding up through court under Section 433(d) of the Companies Act. the company In the above circumstances, the corporate veil may be lifted to find out the reduction of membership below the statutory minimum.

A resident of Germany was in the de facto control of the company affairs in the capacity of managing director of the company. During that period, Germany was at war with England. He used his position to recover certain trade debts. This was intentional because the period of recovery was during war. The Court held that unfair use of position at the time of war also contradicted to the public policy.