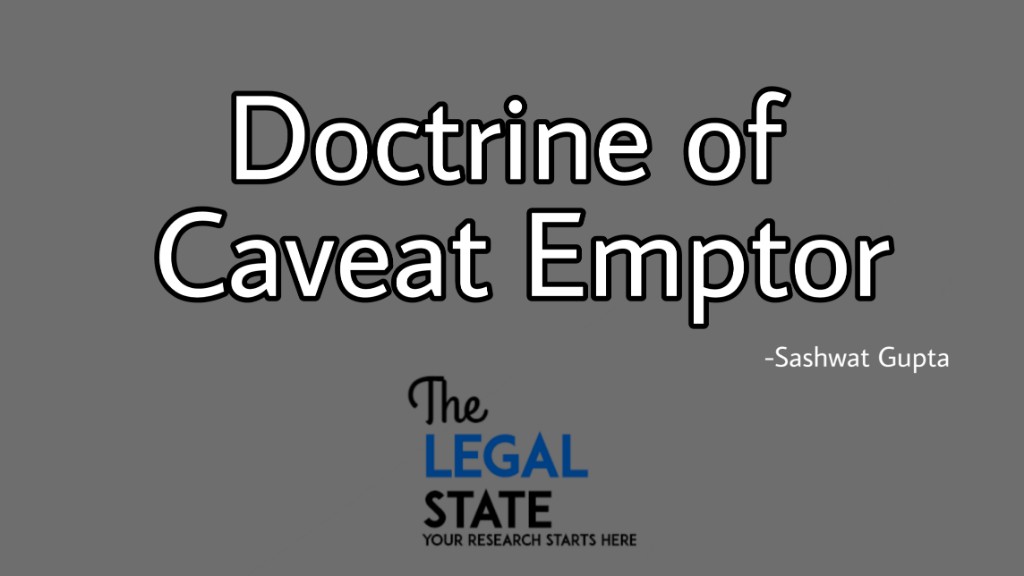 The doctrine of Caveat Emptor

A doctrine is like a family that is coming up in the world; it fits itself out with an ancient lineage. ~ Old Simian Proverb

Whenever a contract comes into existence there is a presence of certain cornerstones on which such a contract stands as valid. An individual seeks information about various terms in a contract such as contractual terms, consideration, number of parties involved, the object itself, etc. while engaging himself into it, this is the point where a vital aspect plays its part. Caveat Emptor, which translates to “let the buyer beware”, is a Latin phrase that refers to the duty of the buyer to ensure that the product, property, or any asset they are buying is of the quality they expect. 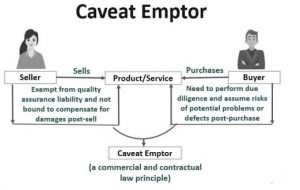 This maxim is explained in Section 16 of the Sales and Goods Act[1], which states “Subject to the provisions of this Act and of any other law for the time being in force, there is no implied warranty or condition as to the quality or fitness for any particular purpose of goods supplied under a contract of sale “

This methodology is applied to the perspective that the buyer, instead of the seller, is responsible for having known the information of the purchased good, such as its strengths, weaknesses, and defects. The doctrine aims to make the buyer more aware of his/her choices, the seller’s liability is limited to the period when it is sold to the buyer after the transaction has commenced, the seller holds no responsibility for any defects that may arise shortly

In the primitive era, it was comparatively easy to ascertain the actual value of an asset/product as both the buyers and sellers were seemingly on the similar mediocre ground, but as such assets grew complex and with the dissent of the global commerce, the consumer is somewhat at a major disadvantage. The following illustrations can help understand this principle better:

But if the illustration is molded while taking into concern its applicability as well:

Historical Aspect of the doctrine of Caveat Emptor

The history of this maxim is considered to be older than Christianity itself[2], as was practiced in the Courts of England, it was the perfect principle to be used for transactions involving a not massive quantity of goods. It was a yardstick for the Courts on the outlook that the buyer had to obtain the optimum advantage of his knowledge about the product to be careful or to be liable for any defaults in the future itself and there were no warranties which might have assured the quality of the goods.

In such a case he was not simply assuming a fact but giving a clear warranty to the buyer he could be sued even though he did not know about the falseness of his affirmation.[3]

Though there was a supposed lineage of this maxim, the 18th century English and American courts had adopted the outlook that “a sound price warrants a sound commodity”[4]. In 1804 in the doubtful case of Seixas v. Woods, it was held that “there could be no recovery against a merchant who could not be proved knowingly to have sold defective goods”,  other American jurisdictions quickly fell into the same detriment.

This precedent was among the most frequent accidents of historical misunderstandings, which was widespread in America by the later years; Nor the economic fluctuations or the demands of the market be a possible reason for such an extensive acceptance of this principle, but the eyebrows were raised from the beginning itself as there was “no standard to determine whether the vendee has paid a sound price”[5].

Verplanck was the first writer to publish notes on such irregularities of this doctrine, which had recently been adopted at that point of time, he wrote “the important and difficult question of the nature and degree of equality in compensation, in skill or knowledge, re- quired between the parties to any contract . . . to make it valid in law, or just and right in private conscience.”. He attacked the doctrine of caveat emptor on the cornerstones that it should be fraudulent to conceal “any fact . . . necessarily and materially affecting the common estimate which fixes the present market value of the thing sold . . . “

But as the development of the legal framework took its pace, there was a slight manipulation of this doctrine, the lawmakers understood the fallacy of such a principle and decided to equably restructure its meaning to another principle known as “Caveat Venditor”. This aspect looked forward towards the transaction from the buyer’s point of view, this phrase translating to “let the sellers beware”, was revolutionary as it changed the whole traditional outlook of the precedents that were in use at that point of time.

Exceptions of the doctrine of caveat emptor

Caveat Emptor is a universal doctrine that is still used in many cases, with one example being its primary usage in various transactions relating to real estate. However, this principle has some exceptions too, some of them could be explained as follows:

Whenever a buyer informs the seller of his intention of purchasing a particular product, it is implied that the former would be relying on the latter’s decision, be it on any grounds relating to the quality of the product which also implies that the product satisfies the needs of the buyer, the seller must do so. But in case the product proves itself to be unworthy of the desired task, then the seller can be held responsible for the same.

Whenever a buyer commences purchasing a product on the mediocre cornerstones of it being of a well-known brand or company the seller cannot be questioned for the usefulness of the product for any desired task and hence there is no implied condition here whether it would serve its purpose or not.

This aspect revolves around the situation when/if the seller obtains the buyer’s consent by either fraud or concealment of facts about the product, then this doctrine would not imply. Also, even in the near future from the date of commencement of the transaction, if any of the facts are found to be inconsistent, then the seller would not have any protection from this doctrine.

If and may the seller is selling the good through the description, then there is an implied condition that the good would match it and would be of “Merchantable Quality”, but if the same condition fails then the buyer would not be responsible for the same, it will be that of the seller.

Case Studies related to the doctrine of Caveat Emptor

Plaintiff, Stambovsky entered into a contract with Defendant Ackley to buy his house, located in the region of Nyack, NY.  During the commencement of execution of the contract and closing, Stambovsky learned that the house had an infamous reputation for being haunted.  Belonging from New York City, Plaintiff was not aware of the fact that local folklore about the house being haunted.

However, Ackley took steps to conceal that reputation, having reported about seeing apparitions in the house in a national publication i.e., Reader’s Digest and a local newspaper. Upon learning that the house was supposedly haunted, which would negatively impact its value, Stambovsky sued to rescind the contract and recover his $32,000 deposit.

Whether an undisclosed condition impairs the value of the property is a basis for rescission of the contract.

The infamous reputation of the house which was purported to be haunted impairs the value of the said property which was concealed by Defendant can constitute a basis for the recission of the purchase agreement.

Where a condition which has been created by the seller materially impairs the value of the contract and is peculiarly within the knowledge of the seller or unlikely to be discovered by a prudent purchaser exercising due care concerning the sale, nondisclosure constitutes a basis for rescission as a matter of equity.

Even an express disclaimer e.g. “as is” will not be given effect where the facts are peculiarly within the knowledge of the party invoking it.[8]

In this case, a contract of sale gets formed between Defendant and Plaintiff according to the terms of which the former has to sell an animal from his farm to Plaintiff. Negligently, Defendant selects an animal that has been suffering from some sickness. That sickness is characterized by propagation from one animal to the other and the ultimate effect is the death of the animal. It should be noted that the sickness is externally visible. Defendant negligently selects such an animal and as a result, all animals present on his farm come across death. Defendant drags Plaintiff to the court.

Court decides that Defendant is negligent, he cannot blame the seller for his negligence and therefore he cannot claim any compensation. Thus, the caveat emptor rule protects the seller. It depicts that the above rule has been unfavorable to the buyer.

Thus, it can be concluded from the aforementioned analysis that the rule of Caveat emptor is being taken over by the rule of Caveat Venditor and is slowly getting diminished from its reputed position in the legal fraternity. The change is taking place to create a more consumer-oriented market wherein transactions of commercial nature will be encouraged. Such change will help to create a more consumer-friendly market and an appropriate balance can be maintained between the rights and obligations of the buyer and the seller. But it should be noted that if this approach is taken too far, it might end up in becoming extremely pro buyer and then some people might end up misusing the protection under the law.