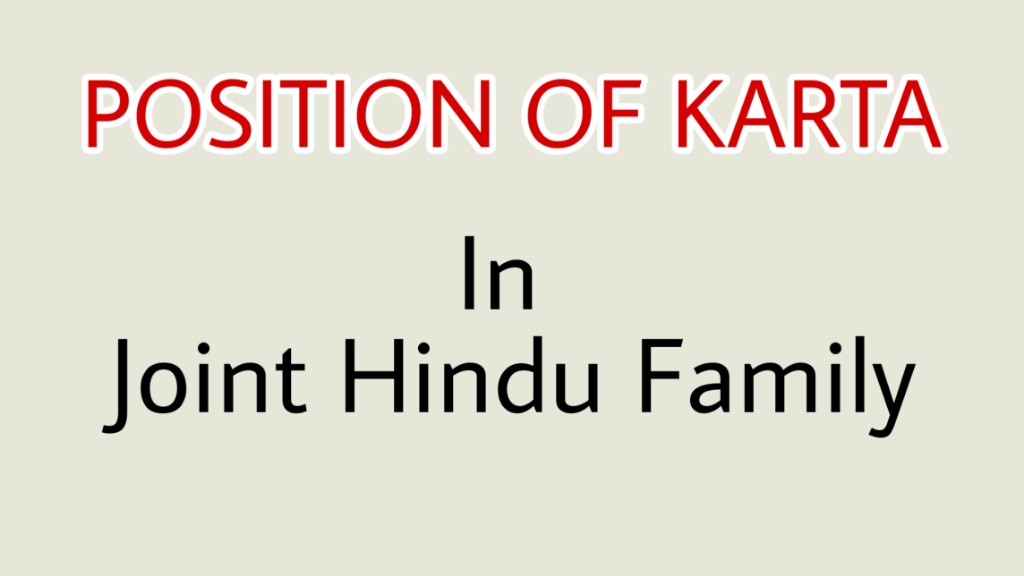 The Position of the Karta Under Hindu Law

The Karta of a joint Hindu family is not the agent of the other members in the family to make them liable as principal. The true relationship is neither that of a principal nor of an agent, as subsisting between partners. The position of Karta in a joint Hindu family is sui-generis. He occupies a very important position. His position is so unique that there is no office or institution in any other system of the world which is comparable with it.

The Judicial Committee of the Privy Council in Hunoomanpersaud Panday v. Mussumat Babooee Munraj Koonweree [(1856) 6 Moore’s IA 393] had explained the role of Karta, in relation to joint Hindu family property in respect of his qualifications, position, powers, duties, and liabilities in the following aspects:

1. Who can be a Karta,
2. Position of a Karta and
3. Powers, duties, and liabilities of Karta.

the Lordships of the Privy Council held, that, the relationship is analogous to that existing between a trustee and beneficiary.

it was held, that, it is a well-settled fact that a contract of partnership between a member of a joint family and a stranger does not make every member of the joint family which the managing member represents a partner to clothe him with all the rights and obligations of a partner as defined under Section 239 of the Contract Act of 1872.

It is no doubt true that as between the members of the undivided family and the coparcener who enters into a contract of partnership for the benefit of the family they will be entitled to call upon him to account for the profits earned by him from the partnership and to share in such profits, but this will not place them in any position of a direct contractual relationship with the other partners of the firm. Nor would the fact that the entire assets of the joint family might be available to the creditors of the firm make any difference.

The position of the plaintiff in the present case cannot be higher than that of a sub-partner. The managing member of an undivided family though he has the power of representing the interests of the other members is not their agent in the strict sense of the term to clothe the other members of the family with all the rights of principals in respect of contracts entered into by their agent, After the death of the father, it is passed to the senior-most male member.

There can be more than one Karta also. A Karta is not to be guided by the quantum of the shares of the individual members, but by their actual needs, as conceived by him.

Can a Hindu Widow act as Karta of the Hindu Undivided Family(HUF)?

In general, as per Hindu law, a Hindu widow, who is not a coparcener in the Hindu undivided family (HUF) of her husband, cannot act as a Karta of the HUF But recently, the Division Bench of the Hon’ble Supreme Court passed a judgment dated 16 December 2015 in Shreya Vidyarthi v. Ashok Vidyarthi & Ors and held that a Hindu widow, though not a coparcener in the HUF of her husband, can act as a manager of the Joint Hindu family where the male adult coparcener has died or where there is no male coparcener surviving or where the sole male coparcener is a minor.

The Court further clarified that a Hindu widow is not a coparcener in the HUF of her husband and therefore cannot act as a Karta of the HUF after the death of her husband. The mother of the male coparcener can act as the legal guardian of the minor and also look after his role as the Karta in her capacity as his (minor’s) legal guardian.

The Court added that such a role as manager of the family has to be distinguished from that of a Karta which positions that the Hindu widow cannot assume by virtue of her disentitlement to be a coparcener in the HUF of her husband.

the Division Bench of the Supreme Court of India has held that the Karta of the joint Hindu Family is certainly a manager of the joint family but undoubtedly possess powers which the ordinary manager does not possess.

The Karta therefore cannot just be equated out with the manager.

it was noted that in the absence of the father in the family, it is the doyen, i.e., the most senior member of the family, who is concluded to be the Karta.

Next: The powers of Karta