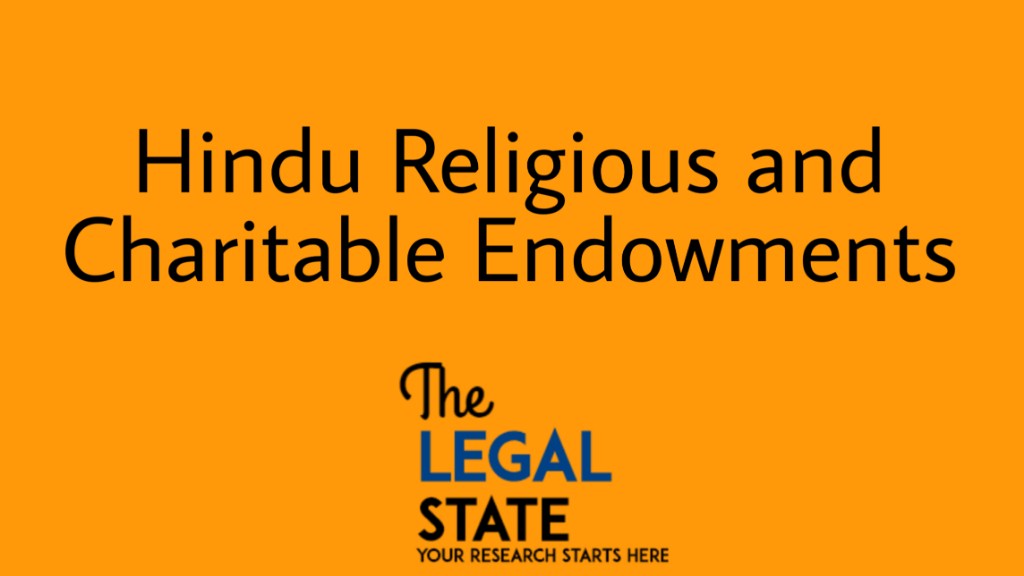 What is an endowment?

A Hindu who is sound and not a minor may dispose of his property by gift or will for religious and charitable purposes, such as the establishment and worship of an idol, feeding the Brahmins, and the poor, performance of religious ceremonies like shradh, an endowment of a hospital, etc.

REQUISITES OF A VALID ENDOWMENT

The following requirements are the requisites of a valid endowment.

1. Competency of the author: The author or settler of the endowment must be competent to settle it.

2. Object: The object must be either religious or charitable. or both.

3. Bonafide dedication: The dedication by the settler must be bona fide and unambiguous.

4. Definite purpose: The object or purpose of dedication must be definite or certain.

6. Not contrary to law: The dedication must not be made in contravention of any provision of law.

CREATION OF AN ENDOWMENT

No writing Is necessary to create an endowment except where the endowment is created by a will. The will must be in writing and attested by at least rwo witnesses if the case is governed by Section 57 of the Indian Succession Act, 1925.

In Ram Janki v. State [AIR 1992 Pat 135], the court held that no religious ceremony, such as sankela, samarpan or pranapratishta, is necessary, and a clear and unequivocal manifestation of intention to create a trust vesting of the same in the donor or another as a trustee is enough valid, but the subject of the endowment has to be certain. to constitute dedication.

Such dedication is Legal Formality No legal document in writing is necessary to constitute valid religious and charitable trust by a Hindu. Only there has to be a clear and unequivocal manifestation of an intention on the part of the author to create such a trust. Superstitious uses In English law, no religious endowments can be established for superstitious use But it does not apply to Hindu religious endowments.

Under Hindu law, a gift in favor of an idol or for the performance of the worship of a deity can be made. But it may not be valid according to English law. Thus, a Hindu can dedicate his property to a deity. It is valid and lawful.

Removal of Idol In general, an idol cannot be removed from its permanent place The Supreme Court in Narayan Bhagwantrao v. Gopal Vinayak [AIR 1960 SC 100 (112)] held that an Idol is tantamount to the construction of a new temple so it cannot be removed. However, where the public agrees for any good reason, it may be removed temporarily, e.g., flood, or earthquake, or any other contingency Further, it was held that if the whole body of worshippers is of one mind, the idol can be permanently removed to another habitation.

Math means an abode or residence of ascetics. It is a monastic institution presided over by its head known as mahant, a superior ascetic. The basic purpose of a math is to encourage and foster spiritual learning and knowledge by maintenance.

There are several types of maths existing in our country. Each of them is governed by its own customs and usages. Maths are of three types: Mourushi math, when the office devolves upon the main disciples of the mahant; Panchayati math, where the office of mahant is elective and last Hakimi math, where the founder has reserved the power of nomination of mahant. Math is a juristic person.

The mahant is the head of the math. The property dedicated to a math vests in math only. When property is dedicated for a particular purpose, the property itself gets impressed with that purpose and is raised to the status of a juristic person and can become in law the bearer of rights and duties.

In Ram Prakash Das v. Anand Das [AIR 1916 PC 256], the Privy Council observed the mahant is the head of the institution. He sits upon the gaddi, he initiates the candidates into the mysteries of the cult, he superintends the worship of the idol and the accustomed spiritual rites, he manages the properties of the institution, he administers its affairs.

In Vindbyawanuthi v Balusani (1921) 48 LA 3021, the Privy Council said, called by whatever name, ne is only a manager and custodian of the idol or nstitution. In almost every case, he ir given the right to a part of usufruct, the mode of enjoyment and the amount of the usufruct, depending again on the usage and custom.

In no case the property is conveyed to or vested in him nor is he a trusree in the English sense of the term, although in view of the obligations and duties resting on him, he is answerable as a trustee in the general sense for maladministration. This position clearly emerges from his power and functions.

POWERS AND OBLIGATIONS OF MAHANT AND SHEBAIT

The manager of the math is known as mahant, whereas the, of the Devasthan is known as shebait in the Northern India, and as dharmkarta in the South. manager

MANAGEMENT AND POSSESSION OF PROPERTIES

The management and possession of the properties of a math belong to the mahant Similarly, the shebait enjoys extensive powers with respect to the management and possession of the debutters properties. Shebait is thar person who serves the deity, consecrated in the temple as a Devata. Shebaitship represents two parts maintenance of deity and management thereof. It is not only an office but is also accompanied with certain rights.

POWERS OF MAHANT AND SHEBAIT

The of mahant and shebait can be discussed as follows powers respect of the math or Debutter’s property:

Power over the Income of the Math or Debutter Property:

Both a mahant and shebait are under an obligation to function for the benefit of the estate. Like a trustee, both mahant and shebait shall not spend any additional income from math or debutter property, against the interest or for their personal comforts or for any purpose other than those mentioned in the deed and beyond his powers.

The shebait is empowered to contract debt or to take a loan for the management of the temple and the idol installed, for the purposes of worship or repairs of the temple, or for purposes of protecting the properties belonging to the deity or to defend the suit filed against the interest of the temple or the idol.

The mahant or shebait is entitled to earn separate property besides discharging his duties in that capacity. The law does not disqualify prohibit or disqualify them in connection to acquiring of any property. However, in case of allegation, he has to prove that the said alienation was not connected with the trust property or the property given to math or to idol.

Removal and Replacement of Idol

The shebait is empowered to remove or replace the idol from the place of worship ifhe finds it necessary or desirable. But while doing so, the majority of the worshippers have to give their consent to it.

Where a shebait has made some payments of his own accounts for the preservation of debutter the same from the debutter property in his custody, he can realise property. Alienation of Debutter Property As a general rule, any property given for religious worship Is inalienable.

The shebait or the mahant cannot alienate the debutter’s property. One exception to this rule where the shebait or mahant can alienate the property is legal necessity or for the benefit of the estate or for purposes of keeping up the religious worship and for the benefit and preservation of the of alienation of a shebait can be compared with the power of a manager of a minor coparcener.

In Jogendra Nath v. Official Receiver [AIR 1975 Cal 389], the Calcutta High Court held that under the Hindu law, and aliena- tion of debutter property can only be made on the ground of legal necessity and it can be made by all the Shebaits acting jointly… The Shebaits cannot delegate their authority to any other person or a particular person or some Shebaits. Thus, it is well settled that the mahant or shebait can alienate the property for purposes of legal necessity.

The following are some of the alienations declared as valid on the ground of legal necessity by the Courts: