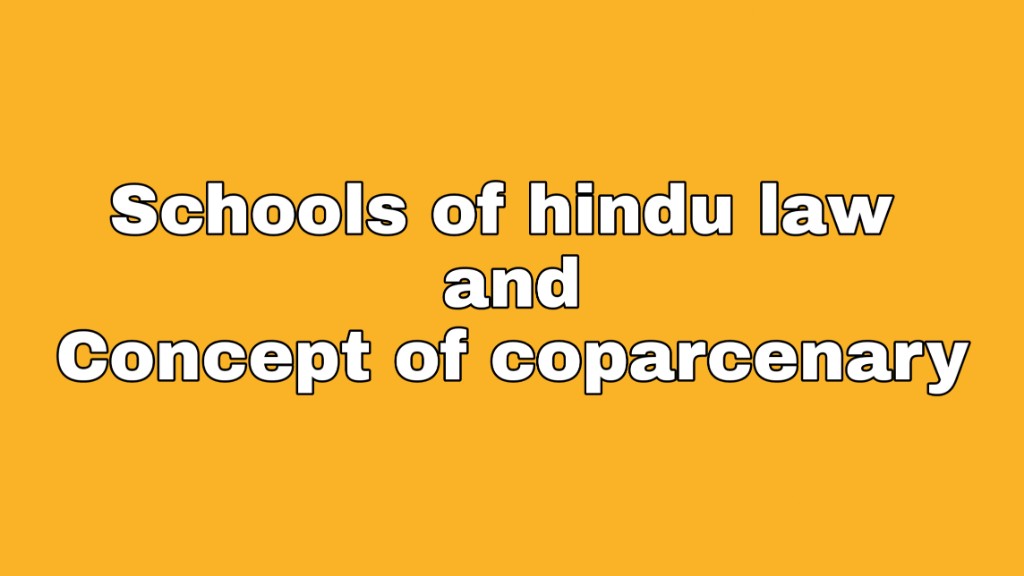 Schools of Hindu Law and Concept of Coparcenary

Introduction to Schools of Hindu Law: The expression school of law is applied to different legal opinions prevalent in different parts of India. Strictly speaking, there are only two main schools of Hindu law: the Mitakshara and the Dayabhaga. All the other schools are sub-schools of the two. There are fundamental differences of doctrine between these schools. The Mitakshara is the supreme authority in India except in Bengal. In Bengal, the Dayabhaga is considered a superior authority.

The subdivisions of the Mitakshara are as follows:

The subdivision was carried even to the extent of dividing the Dravida into a Tamil, a Karnataka, and an Andhra Pradesh school. The Mitakshara written by Vigneswara is a running commentary on the Smritis of Yagnavalka, whereas the Dayabhaga is written by Jimutavahana.

Differences between Mitakshara and Dayabhaga schools of Hindu law

The basic differences between Mitakshara and Dayabhaga are stated below:

Also Read: Adoption under the Hindu Adoptions and Maintenance Act, 1956

The Hindu joint family is peculiar to Hindu society only. The concept of Hindu law is deeply rooted in Hindu philosophy and Hindu religion. Till today, no precise definition of the word Hindu is available in any statute or judicial pronouncement; it has defied all efforts at definition.

The Mitakshara joint family is a unique contribution to Hindu law which has no parallel in any ancient or modern system of law.

Generally, an undivided family which is a normal condition of Hindu society is ordinarily joint not only in the estate but in food and worship. A joint Hindu family does not consist of male members only. It may consist even of females.

A coparcenary is a sole creature of law and cannot be created by any act of parties except in case of adoption. When adoption is effected, a stranger may be entered in the joint family as its member. Hindu coparcenary is a much narrower body than a joint Hindu family.

It includes only those persons, who acquire an interest by birth SE in the joint or coparcenary property. It is to be noted that no coparcenary can commence without a common male ancestor.

In the case of Hindu coparcenary, the property of a male Hindu can be divided into two parts:

The self-acquired property is his separate and independent property. It does not constitute coparcenary property.

Ancestral property may be dealt with under the following heads:

The following are the classifications of properties: