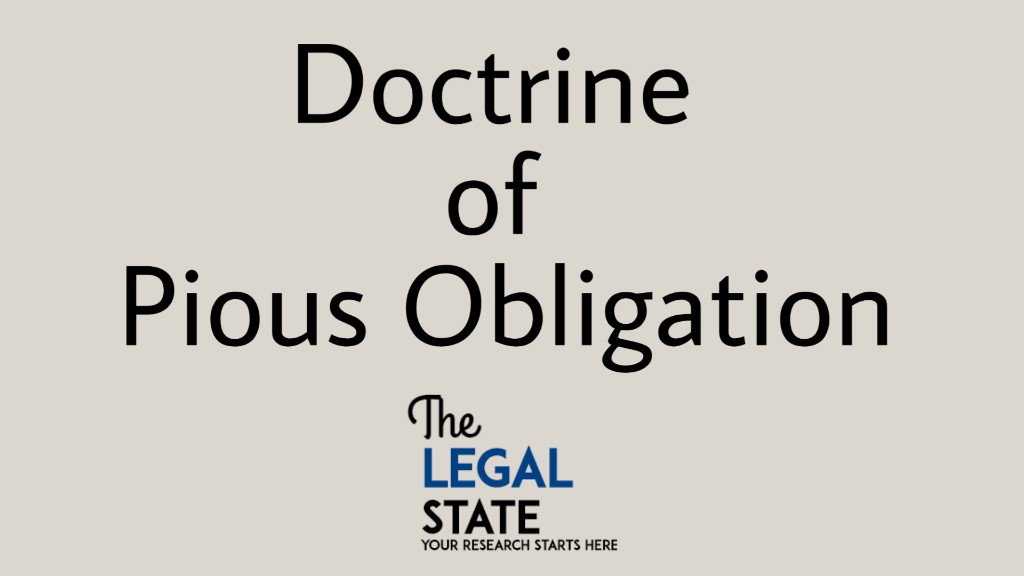 The doctrine of Pious Obligation

The basis of the doctrine of pious obligation was the belief that non-payment of a debt was a sin. So, the father’s soul would be tormented unless he is relieved of his unpaid debts. The son is under a pious duty to relieve his father from such torments in hell by paying his debts.

Pious obligation means a moral obligation. For the debt incurred by the father, his sons would be bound, and their coparcenary interest can also be made liable for repayment. This liability would arise even though there is no legal necessity or legal benefit to the estate. But it is to be noted that the debt should not be an avyavaharika debt.

The ancient doctrine of pious obligations Compared with the modern doctrine

There are some differences with regard to the doctrine of pious obligation as recognized by the Dharmasastras and as applied by modern judicial decisions. It was observed by the Supreme Court in the following cases:

According to the modern doctrine, the pious obligation arises in all cases even during the lifetime of the father. The son, grandson, and great-grandson are bound to discharge the debt incurred by the father. They all have to pay interest on the debt also. According to the modern doctrine, the self-acquired property of the son, grandson or great-grandson is not liable at all. It is only when their coparcenary property that the pious obligation exists. The interest of the son in the coparcenary property becomes liable for the debt.

However, it is to be noticed that under both ancient and modern doctrines, there exist certain exceptions.

Any debt incurred for drinking spirit-containing liquors, fines, and tolls payable by the father is outside the scope of the doctrine of pious obligation.

In this case, it was held that where the father contracts venereal diseases owing to his immorality, the debt incurred for medical treatment would itself not be Avyavaharika. Taking a course of treatment for the cure of the disease is not immoral. Whether Liability Originates in a Tortious Act or Not?

In this case, the father was a managing director of a Co-operative Bank. His negligence resulted in a liability to the bank. It was held that the father’s liability arising out of tortious act is not necessarily Avyavaharika.

However, it is to be noted that some debts have been treated as absolute.

It was held that the son is liable on the father’s surety bond for payment of another’s debt. However, in modern doctrine, the son is not personally liable. His coparcenary interest in the joint property would be bound.