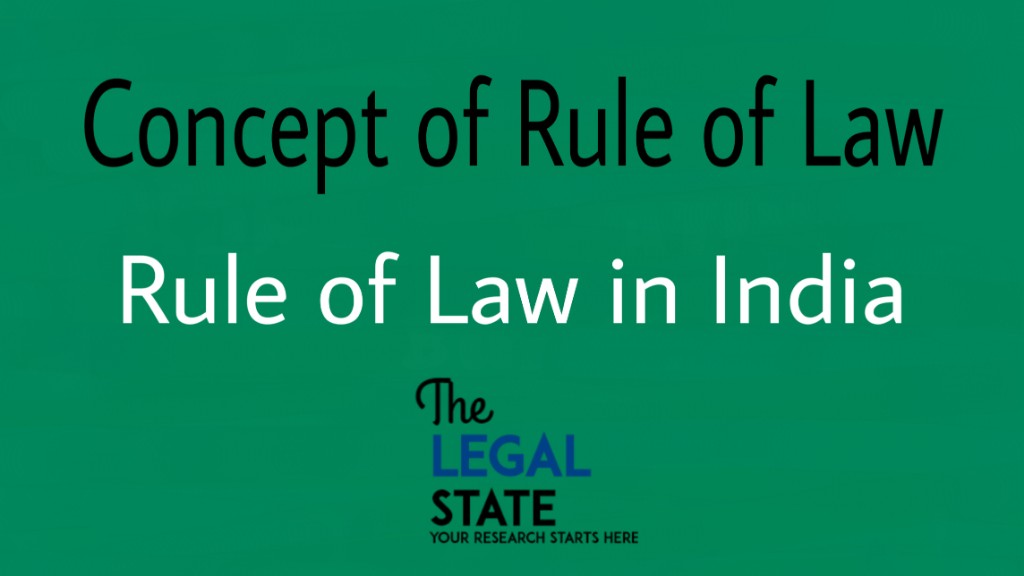 Concept of Rule of law and Rule of Law in India

Rule of Law is known as one of the basic features of the English Constitution. The doctrine is accepted in US as well as in India. The concept of Rule of Law was originated by Sir Edward Coke, CJ in James I’s reign. According to him the king should be under the law and God. He believed that the law is supreme against the executives.

The theory of rule of law was further developed by A.V Dicey in his famous work The Law and the Constitution in the year 1885. According to Dicey, rule of law is one of the fundamental principles of the English Legal System and there are three attributes to this doctrine-

Supremacy of Law- According to dicey, rule of law means absolute supremacy of regular law as opposed to the influence of arbitrary power of the government. He believed that if there is discretion, there will be arbitrariness. This meant that no one can be punished/arrested or made to suffer except by the due process of law. This, according to dicey was the ‘central and most characteristic feature of the common law’.

Equality Before Law- Equality before the law and equal subjection of all classes to ordinary law of land administrated by ordinary law courts.  He was of the opinion that PM to ordinary man, everyone is under the same responsibility for any act done by them without any legal justification. He criticized the French legal system of the Droit Administration in which there are different administrative tribunals for deciding cases between officials of state and citizens. He stated that exempting the civil servants from the jurisdiction of ordinary courts of law and providing them special tribunals was the negation of equality.

Judge Made Constitution- According to Dicey’s theory, many rights such as personal liberty, freedom to hold public meetings, etc are not written laws in England like other countries. They are the results of judicial decisions in different landmark cases.  According to him, the role of courts of law is to be a law guarantor and suggested that the rights would be more adequate if they are enforced in the courts of law rather than declaring those rights in a document. He was of the opinion that such declarations cannot be adequately practiced as they can be curtailed, tempted, or ignored afterward.

Modern Concept of Rule of Law

As we discussed above, the Dicey concept of the rule of law was not accepted in its whole form in England even in 1885, when he formulated it. Today, Dicey’s theory of rule of law cannot be accepted in its totality. Davis, another jurist further formulated Davis’s theory. He gave seven principal meanings of the term “rule of law”:

Rule of Law in India

Dicey’s rule of law has been adopted and incorporated in the Indian Constitution. The Preamble itself included ideas of Justice, Equality, and liberty. These concepts are enshrined under the Part III of the Constitution as fundamental rights and are made enforceable. The Constitution is supreme and all the three organs of the government i.e.,   legislature, executive and judiciary are subordinates to it. they have to act in accordance with the constitution. The doctrine of judicial review is embodied in the constitution and the high court and supreme court can be approached for the enforcement of fundamental rights guaranteed by the Constitution.

All the rules, by-laws, notifications, customs, etc are “laws” within the meaning of Article 13 of the Indian Constitution and they can be held ultra vires by the apex court if found inconsistency with the Constitution.  Article 21 clearly states that no one can be deprived of life and liberty except according to the procedure established by law.  The “The king can do no wrong” principle is not applicable in India.

The constitution guarantees equality before the law and equal protection under Article 14. The Government and public authorities are also subjected to the same jurisdiction of ordinary courts of law. They are not immune from ordinary legal processes and nor are separate administrative courts and tribunals for them.  The rule of law is also treated as the basic structure of the constitution.[1]

As we have read earlier that in Dicey’s opinion the judicial decisions given in different cases cannot be adequately considered as rights. Contrary to this principle was the minority judgment given in the ADM Jabalpur case by Justice Khanna. In this case, the narrow issue in front of the Supreme Court was whether there was any “rule of law” in India apart from and irrespective of Article 21 of the Constitution.

Article 21 is our rule of law regarding life and liberty. No other rule of law can have separate existence as a distinct night. The rule of law is not merely a catchword or incantation. It is not a law of nature consistent and invariable at all times and in all circumstances. There cannot be a brooding and omnipotent rule of law drowning in its effervescence the emergency provisions of the Constitution.”

Justice Khanna, contradicting this view, observed that, rule of law is the antithesis of arbitrariness. | It seeks to maintain a balance between the opposite notions of individual liberty and public order. The principle that no one shall be deprived of his life and liberty without the authority of law was not the gift of the Constitution.

It was a necessary corollary of the concept relating to the sanctity of life and liberty, it existed and was in force before the coming into force of the Constitution. Even in the absence of Article 21 in the Constitution, the State has the authority of law. This is the essential postulate and basic assumption of the rule of law and not of men in all civilized nations.