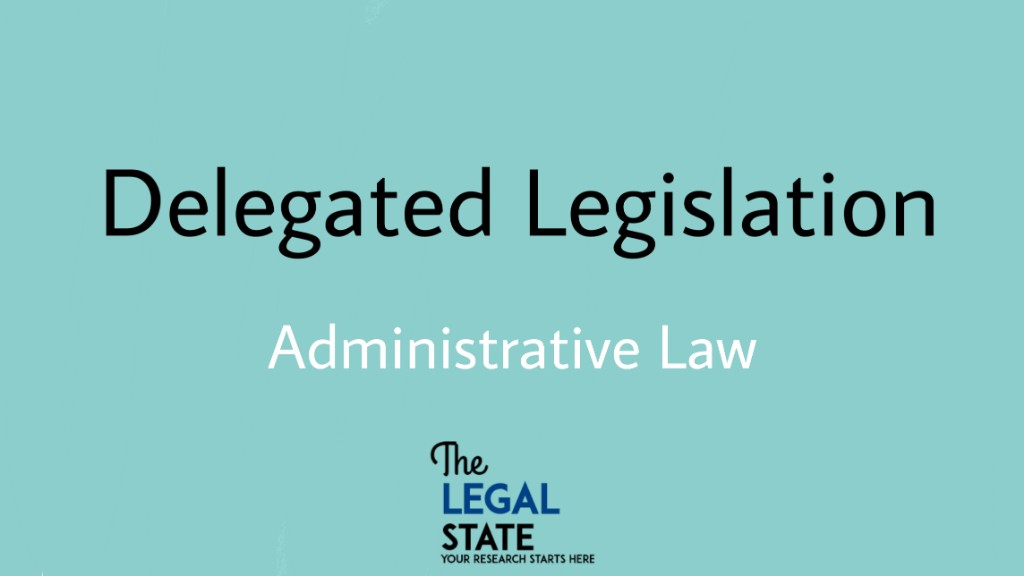 Delegated legislation can also be defined as an instrument of legislative nature made by an authority in the exercise of the power conferred by the legislature. Salmond delegated legislation as which proceeds from any authority other than the sovereign power and is, therefore, dependent for its continued existence and validity on some superior or supreme authority. For example- under the Environment Protection Act, 1986, the central government is given the power to make rules for effecting this act. Exercising these powers the central government made Environment Protection Rules,1986. This is known as delegated legislation.

Reasons for the growth of delegated legislation

The court in the case on Avinder Singh v. State of Punjab[1] said that, if 525 parliamentarians are to focus on every minuscule legislative detail leaving nothing to subordinate agencies, the annual output may be unsatisfactory and negligible.

For example- in the covid pandemic mask and sanitizers were declared as essential commodities under the Essential Commodities Act by the administrative wing.

Example- Under the Environment Protection Act, 1986, the central government can make rules for effecting this act.

Example- In the covid pandemic, the government passed an order to include masks and sanitizers as essential commodities under the Essential Commodities Act by the administrative wing.

For example- in the Environment Protect Act, section 1(3) states that the act shall come into force when the central government by giving notification in the official gazette appoints a date for its enforcement or for enforcing different provisions on different dates.

Conditional legislation is classified into 3 categories-

In this case, the court held that the legislature cannot delegate its law-making power to the executive. It can make a law and delegate a power to determine some facts or state of things upon which the law intends to make. The court also observed that the functions which are given to the executive cannot be stopped/denied as it would lead to the stoppage of the system functions of the government.

The court believed that There are many things on which law depends which cannot be known to the lawmakers and must therefore be subject to inquiry and determination from some authority outside the legislature.

In this case, an ordinance was made by the governor-general providing for the setting of special courts in case of emergencies. But the operation of it was left to the provincial government on being satisfied that the emergency had come into existence.

The Privy Council held that it was conditional legislation as the administrative body was given a condition that was required to be fulfilled to exercise the power given to them.

The difference between delegated and conditional legislation was given in the case of Hamdard Dawakhana v. Union of India[4]. The court said that: