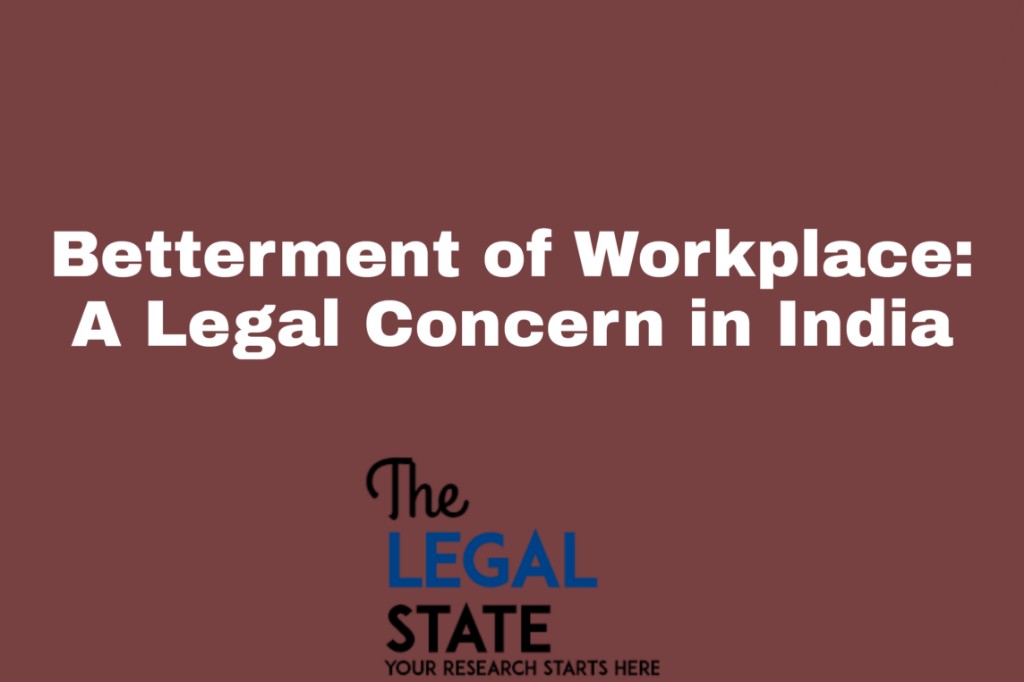 This is the period of pursuing high-paying occupations in order to get the desired salary. Betterment of Workplace is important because most people spend more than 7 hours at work, the level of their involvement can have an impact on the individual and wellness. The passage of time necessitates changes in labor legislation in order to address the everyday demands at work or at home.

In the corporate sector, labor and workers play a crucial role. Indian laws exist to ensure that workers and employees are treated fairly in the workplace and that their rights are protected. These rules help guarantee that businesses recognize their workers’ competence and pay them appropriately.

With the COVID – 19 epidemic, many companies are scrambling to plan for the worst, including work from home, vacations, remuneration, insurance, and a variety of other considerations.[1] This condition causes concern not just among reporting heads, managers, and the like, but also among the top leadership, including the board of directors and firm shareholders.

Various minimum wage rates may be set for different scheduled employees, different classifications of employment, and different areas, according to Section 3 of the Act.  This specific Act does not specify basic pay in terms of rupees; instead, it states that the wage must be a living wage determined by each state’s labor agency. Certain guidelines have been established, such as calorie requirements, the number of yards of cloth per household, etc.

Due to this ambiguity in the law, in several unorganized sectors, employers pay fewer wages to their employees, especially those who work on a contract basis. This leads to leaving some workers below the poverty line. Which basically constitutes a big issue for the workplace of employers and the development of the nation as a whole.

Whereas, it is seen in the other countries that the wages are fixed properly in terms of their official currency and even according to the states. For instance, the Canadian government has fixed the minimum wages as per the province or territory. The minimum wage, the minimum age to work, employee rights, overtime limitations, working conditions, and trade unions are all governed by provincial labor laws. As in Alberta minimum wage set is $8.80, in Manitoba, it is $9.00, in Ontario, it is $10.25, in Quebec it is $9.50, etc.

Hence, it can be seen that our Minimum Wages Act should be revised and a proper number of wages in terms of rupees should be added in the laws to avoid vagueness and ambiguity and to evade the disputes that arise in the workplace.

After Canada and Norway, India has the third most progressive maternity benefit legislation in the world[2]. With a significant reform to the legislation in 2017[3], our nation essentially beat industrialized countries like the United States, France, Japan, the United Kingdom, and others in recognizing the mother’s right and need to take a six-month leave after giving birth to care for herself and her child. While the policy is thoughtful in terms of length, it falls short in terms of execution.

In section 5 of the Maternity Benefit Act, 1961it is mentioned that Employers will be required by law to cover the whole expense of giving paid maternity leave to female employees, thereby making female applicants more costly than male prospects[4]. Hence, a male and a woman with equivalent educational credentials and experience applied for the same job, the cost of hiring a woman would be much greater, placing her at a biasness and drawback.

Whereas, the United Kingdom and Australia have one of the world’s longest paid maternity benefits, at 52 weeks. In the United Kingdom, 90 percent of average weekly wages are paid during the first six weeks. Following that, during weeks 7-39, a fixed fee or 90% (whichever is less) is paid. Women, on the other hand, do not receive any wage benefit for the remaining weeks between 40 and 52. In Australia, women are paid for 18 weeks at the federal minimum wage.

Canada, Brazil, and South Africa all have paid maternity leave of 17 weeks. In terms of percentages, Canadian women receive 55 percent of their pay as a paid benefit for 15 weeks. While women in South Africa females receive 60% of their income.

From the above, we can see that no country has enough burden to take on women’s part. It can also be noticed that most of the countries are developed countries and India is a developing nation. Hence, this part of the maternity benefit Act 1961 should be revised.

[4] Section 5 of the Act, Right to payment of maternity benefit