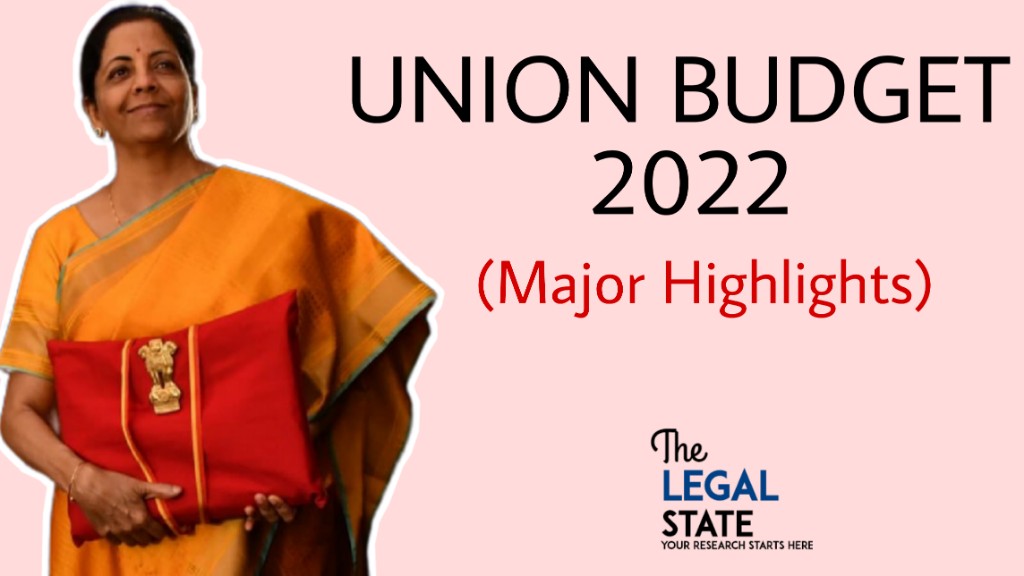 A boost for many industries, while middle-class taxpayers are once again left in the lurch?

Finance Minister Nirmala Sitharaman declared in her Union Budget address for 2022-23 that the government will issue green bonds “to mobilize resources for green infrastructure.” This report analyzes the concept of green bonds as well as how the Indian government may design and issue them.

Major announcements in the union budget 2022

Prime Minister Narendra Modi stated that the Union Budget for the financial year 2022-23, given by Finance Minister Nirmala Sitharaman on February 1, will double farmers’ income and help medium, micro, and small enterprises (MSMEs). Sitharaman asserted that the fiscal road map she released will assist every sector of the economy, “with a specific focus on agriculture.” According to him, the announcement of “around Rs 2.25 lakh crore MSP (minimum support price)” will assist farmers since the money will be “directly given” to them. This “budget will treble farmers’ income,” he said, according to news agency ANI. “Credit guarantee and several other programs have been established for MSMEs,” Modi said.

Prime Minister Narendra Modi praised the 2022 Union Budget as “people-friendly” and “progressive,” saying it gives India’s growth trajectory fresh energy and power, especially at a time when the country is combating the epidemic. “This Budget will increase infrastructure, investment, development, and job creation,” he stated. The Prime Minister stated that the Indian young regard this Budget as one that would help them achieve their goals, and that the emphasis on futuristic technology in all areas is notable and will benefit a wide range of our population. PM Modi, on the other hand, stated that he will discuss the Budget in further depth tomorrow.

Finance Minister Nirmala Sitharaman stated at a news conference after delivering the Union Budget that she made a conscious choice not to raise taxes because of the suffering that people have been experiencing as a result of the epidemic.[1] During her presentation of the Union Budget, Sitharaman stated that the country will expand at a rate of 9.27 percent in the next year. The Budget, which focuses on four pillars of growth — inclusive development, productivity enhancement, energy transition, and climate action — provides a plan for India’s economy from 75 to 100, according to Sitharaman.

There was a lot to understand, from a long-awaited drop in long-term capital gains (LTCG) tax on unlisted shares to levying a tax on crypto profits, a sign of legitimizing the asset class. Overall, the budget was a letdown for the taxpaying middle class, as the government took a cautious approach.

Due to a hike in customs duties on imported parts proposed by Finance Minister Nirmala Sitharaman in the Union Budget for 2022-23, a large number of commonly used items, such as headphones, earphones, loudspeakers, smart meters, imitation jewelry, solar cells, and solar modules, will become more expensive. “However, as a consequence of the reduction in customs taxes, imported cut and polished diamonds, frozen mussels, frozen squids, asafoetida, cocoa beans, methyl alcohol, and acetic acid will become cheaper.”

Budget day action is rarely as good as it is this year. Even after giving up all of its gains a little after Finance Minister, the Nifty 50 index surged 1.4 percent. The gains were the third-best for a Budget day in the last ten years, as investors cheered the government’s decision to continue to support capital formation in the economy for another year, despite the fact that private sector CAPEX remained in a coma. Capital expenditures increased by more than 35% to Rs 7.5 lakh crore, a 24.5 percent increase above the revised forecast for the current fiscal year. These figures outperformed even the most optimistic Wall Street analysts, who had predicted a 20% increase in revenue.[2]

The allocation made in the Union Budget:

In 2022-23, the Budget expects the Central government’s effective capital spending to be Rs 10.68 lakh crore or around 4.1 percent of GDP. The Finance Minister said that the GST receipts for January 2022 were Rs 1,40,986 crore, the highest since the tax was introduced in 2017. In a big push for digital money, Sitharaman said that the RBI will issue digital rupees using blockchain technology beginning in 2022-23. According to the Finance Minister, this will provide a significant boost to the economy.[3] She also stated that any revenue derived from the transfer of a virtual digital asset will be taxed at a rate of 30%.

India on Tuesday included Rs 200 crore in its budget for 2022-23 for economic aid to Afghanistan, as well as Rs 100 crore for the Chabahar port project, as a show of its commitment to the Afghan people. In the Union Budget for the next fiscal, Finance Minister Nirmala Sitharaman gave a total of Rs 17,250 crore to the Ministry of External Affairs, of which Rs 6,292 crore is for development aid to nations in India’s neighborhood, as well as Africa and Latin America.

Union Finance Minister Nirmala Sitharaman recommended a 30% tax on “any revenue from the transfer of any virtual digital asset” and a 1% tax deduction at source (TDS) on transactions over a monetary threshold on Tuesday. While the upside is limited in terms of revenue mobilization, the step is significant since it represents the government’s first legal acknowledgment of increasingly popular financial instruments and applications, such as cryptocurrencies and non-fungible tokens.

The imposition of a tax on these instruments is also an indication from the government that it intends to follow through on its stated aim to recognize them as assets rather than currencies, ahead of the planned cryptocurrency Bill, which is expected to provide further policy clarity. The application of TDS indicates a policy commitment to trace the monetary trail in a sector that has hitherto been exempt from regulatory oversight or tax collection.

The total funding allocation for 2022-23 has not changed considerably in a Budget expected to look into restoring Covid-induced learning deficits and implementing major provisions of the New Education Policy published nearly two years ago. While it increased from Rs 93,224 crore (budget projection) in 2021-22 to Rs 1.04 lakh crore, according to Finance Minister Nirmala Sitharaman’s announcement on Tuesday, the rise does not appear to be as significant when compared to the Rs 99,311 crore set aside in 2020-21.[4]

Sitharaman emphasized the importance of improving digital forms of learning to enhance supplemental teaching in her Budget address and recommended the establishment of a digital university. However, the e-learning component of the Digital India program was cut to Rs 421 crore from Rs 645 crore in 2021-22. For 2021-22, the revised estimate was Rs 367 crore.

The increase in total allocation is mostly due to an increase in the amount set aside for samagra Shiksha (school education) from Rs 31,050 crore in 2021-22 to Rs 37,383 crore in 2022-23. However, even with the increase, the allocation under this heading is somewhat higher than in 2019-20. (Rs 36,322 crore). “Our students, particularly in rural regions and those from SC and ST groups and other poorer sections, have missed almost two years of formal education due to the pandemic-induced shutdown of schools,” Sitharaman remarked. “The majority of these students attend government schools.

We recognize the need for more training and delivery techniques that are dependable.” She stated that the PM e-” one VIDYA’s class, one channel” program, which was inaugurated in May 2020, will be expanded from 12 to 200 channels to allow all states to give additional education in regional languages to pupils in grades I to XII. The channels that broadcast recorded lectures taped on the NCERT campus are presently available on Doordarshan’s free dish as well as several commercial DTH platforms.[5]

According to Sitharaman, a digital university would be built to give “universal education with a customized experience” to students around the country. She stated that the information will be available in all Indian languages, and the institution will operate on a “hub and spoke” paradigm.

The central funding for the mid-day meal plan, which was relaunched as PM-Poshan last year, has also decreased from Rs 11,500 crore in 2021-22 to Rs 10,233 crore. The amended allocation for 2021-22 was likewise Rs 10,233 crore, showing that the whole cash set aside for the plan could not be spent during the current fiscal year due to school closures.

This is a co-authored article written by Miss Saloni Singh a 3rd-year student and  Vaibhav Singh Chauhan, a 5th year student at the University of petroleum and energy studies.

[2] Mahajan, V., & Singh, J. (2022). Lives, Livelihoods and Environment: The Challenge of Sustainable Development Goals in India. In Financial Crises, Poverty and Environmental Sustainability: Challenges in the Context of the SDGs and Covid-19 Recovery (pp. 93-105). Springer, Cham.