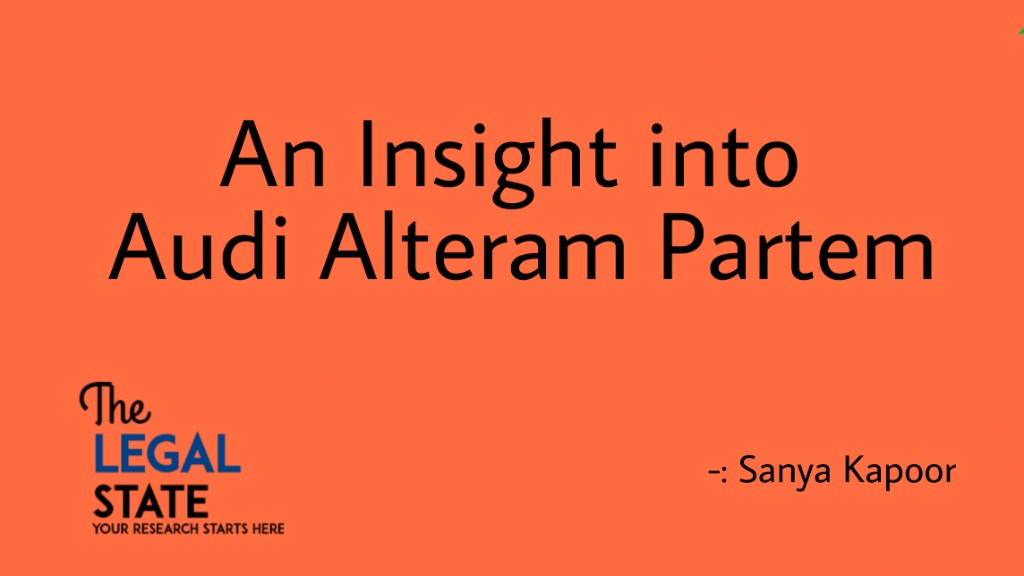 The concept of Natural Justice envisages the magnificent thoroughbred on which the country gallops onward toward its professed and its destined objective of social, political, and economic justice. These principles have been centered around reason and on an effective public policy and can be classified as a branch of public law that acts as an efficacious weapon to ensure that the citizens are being treated fairly.[1] The two limbs of  principles of natural justice can be classified as follows:

Audi Alteram Partem, one of the cardinal principles of natural justice envisaging the criterion of characteristic equity in which every person gets an opportunity of being heard. This principle has been implemented in the sphere of administrative action to provide fairness and justice for those individuals who have been wronged. Its application has been contingent on the factual matrix to promote administrative efficiency, justice, and expediency.

The procedure adopted under this rule must be fair and reasonable as under the court’s watchful eyes, both the parties are equal and should be given an equitable opportunity of being heard. Audi Alteram Partem is the sine qua non of a civilized society. The rule of Audi alteram partem is a code of procedure and is therefore applicable to every stage of an administrative proceeding starting from the right to notice to post-decisional hearing.

Natural justice implies that the person who will be directly impacted by an administrative action should be given adequate notice of the proposed action so that they can make a representation on their behalf. The adjudicatory process commences with a notice to the party in question outlining the case against him and notifying him of the proposed action which has been taken against him.

For a notice to be legitimate and effective, it must be properly issued on the concerned person, and also a prescribed procedure must be followed when the relevant statute has specified a specific mode of serving the notice. A proper notice should specify the date, time, and location of the hearing as well as the particular case or charges against which the concerned person must defend himself. A notice issued in the statute’s bare-bones language, i.e., one that just repeats the statute’s language without providing any facts or details is inadequate and insufficient.[2]

The right to present the case and evidence also known as the right to hearing provides an opportunity for the person being prosecuted to counter the charges which are being leveled against them by either verbally presenting their arguments, presenting witnesses on their behalf, and by pointing out the inaccuracy in the documents produced by the opposition.

Hearing can be done either orally or through a written presentation. Though oral hearing is the most effective form of hearing, the administration can’t conduct such hearing in every case as they are time-consuming and costly. The Hon’ble court in the case of Travancore Rayons v. India[3], held that was complicated and complex questions arise that necessitate technical knowledge, and oral/personal hearing is necessary.

The right to rebut adverse evidence implies that the person has been apprised of the evidence against him. The possibility of rebutting the evidence is based upon two factors-:

The conventional principle is that an adjudicatory body cannot render a decision based on any material unless the person against whom it is being utilized has been notified of it and has been allowed to dispute, discuss or critique it. The right to know what evidence is being utilized against the party is a fundamental principle of natural justice since no materials should be utilized against a party without being allowed to refute them.[8]

The court in the case of Kashinath Dikshita v. U.O.I[9] had quashed the order of the dismissal of a government servant because the disciplinary authority had failed to furnish the copies of the several documents and the witness testimonies that had been recorded ex-parte during the pre-inquiry stage. In Chandrama Tewari v. U.O.I [10], the Supreme Court laid down that only the relevant materials and documents which are necessary for cross-examination of the witnesses are required to be disclosed to the party.

The right to receive the inquiry report is considered to be a vital component of the reasonable opportunity to defend in the administrative proceedings, as the person will be unable to effectively defend himself against an inquiry officer’s report unless he has been given access to that report. The Hon’ble Court in the case of Managing Director, ECIL v. B Karunakar[11] held that an inquiry report has to be furnished whether the employee asks it or not as it would help the individual to determine whether the report is in their favor or against her. In-State Bank of India v. DC Aggarwal[12], the disciplinary authority’s action was deemed void due to the failure to provide an inquiry officer’s report.

Administrative decisions should be reasoned so that the authorities assessing the decisions can determine whether they have been based on relevant factors, erroneous factual findings, or an inaccurate interpretation of the law. Reasoned decisions also known as speaking orders are essential because they prohibit the abuse of administrative discretion and ensure that the decisions are impartial and have been implemented in the public interest.

The Hon’ble Court in S.N Mukherjee v. India[13], held that the requirement of reasoned decisions is considered to be one of the cardinal principles of natural justice which govern the exercise of power by the administrative authorities since such reasons would assist the Supreme Court and the High Court to effectively execute their supervisory powers. The reasoned decisions act as living ties between the decision maker’s thoughts and how the decision had arrived.

A post-decisional hearing transpires after a preliminary decision has been taken and in situations where the pre-decisional hearing is not possible. The notion of post-decisional hearing had been established to strike a balance between the individuals and the administrative efficiency. This harmonizing mechanism had been introduced in the Indian Legal system through the landmark judgment of Maneka Gandhi v. Union of India.[14] The Hon’ble Court laid down that the action of seizing the passport of Maneka Gandhi was in violation of the principles of natural justice and an opportunity to be heard through the tool of Post-Decisional Hearing should have been granted to her.

The primary objective of balancing the inclusion and the exclusion of the protection of the principles of natural justice is to harmoniously comprehend the rights of the individual of fair procedure and being heard, as well as in the public interest. Audi Alteram Partem, which is one of the cardinal principles of natural justice has been implemented in the sphere of administrative action to provide fairness and justice for those individuals who have been wronged. The exceptions to Audi alteram partem are all speculative and not conclusive and each exception will be proclaimed as admissible depending upon the facts and circumstances of each case.