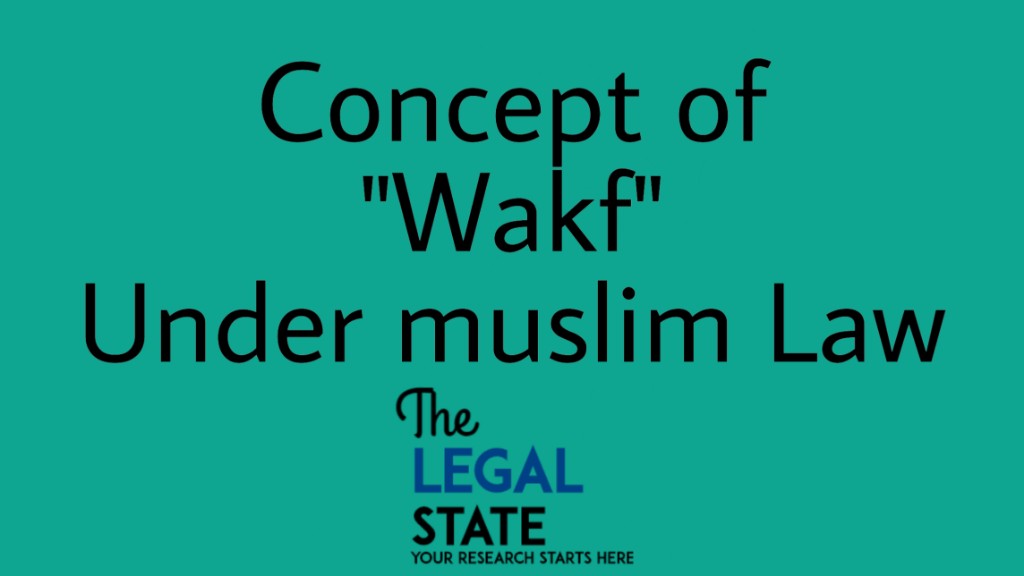 The literal meaning of the term Wakf is detention. In its legal meaning, It is the detention of a specific thing in the ownership of the Wakf and the devoting or appropriating of its profits or use fraction of the charity for the poor or other good objects.

The Mussulmen Wakf Validating Act, 1913, defined the term under Section 2 as follows:  “Wakf means the permanent dedication by a person professing the Mussulmen faith of any property for any purpose recognized by the Mussulmen law as religious, pious or charitable.

A Wakf extinguishes the right of the Wakf or dedicator and transfers ownership to God. The Mutawalli is the manager of the Wakf. It is to be noted that the property does not vest in mutawalli as it would vest in the trustee under English law. A Wakf may be made in writing or oral. However, the Wakf must have the intention to dedicate the property. By dedication and declaration, the property in the Wakf is divested and vests in the Almighty.

Essentials of a Valid Wakf

To constitute a valid wakf, the following conditions are necessary:

1. The dedication must be Permanent

2. The subject of Wakf be any property (movable and immovable)

3. The property dedicated must belong to the Wakf (dedicator).

4. The object of Wakf must be one that is recognized by the Mohammedan law as religious, pious or charitable.

Valid objects of a Wakf:

1. Mosques and provisions for imams to conduct worship.

2. Colleges and provision for professors.

3. Distribution of alms to poor persons.

4. Burning lamps in a mosque and grant to an Idgah.

In the case of Mariam Bai v. Mohd. Jaffar Abdul Rahiman Salt, AIR 1973 Mad 191. It was held that charitable trusts created with the object of starting a school or a college or constructing a mosque or hospital are not prohibited by Muslim law. establishing

Also Read: Concept of Gift under Transfer Of Property Act

Objects Not Valid Under Muslim Law

2. A Wakf in favor of an utter stranger.

The other conditions for the purpose of creating a valid Wakf are as follows:

1. The object of a Wakf must be indicated with reasonable certainty.

2. The Wakf or dedicator must be of sound mind and not a minor at the time of dedicating his property.

3. A wakfnama by which immovable property of the value of Rs 100 and upwards is dedicated by way of Wakf requires to be registered under the Indian registration act 1908 wakfnama is a document creating a wakf

Who is a Mutawalli?

Wakf means the permanent dedication by a person professing the Mussulmen faith, of any property for any purpose recognized by the Mussulmen law as religious, pious or charitable. Under the Mohammedan law, the moment a Wakf is created, all rights of property pass out of the Wakf and vests in the Almighty.

The Mutawalli has no right in the property belonging to the Wakf. In the technical sense, Mutawalli is not a trustee, he is merely a manager.

Who May Be Appointed?

The founder of a Wakf may appoint himself or his children and descendants or any other person, even a female or a non- Mohammedan to be Mutawalli of Wakf property.

If any person appointed as a Mutawalli dies, or refuses to act in trust or is removed by the Court, or if the office becomes vacant, then a new Mutawalli may be appointed

1. by the founder of Wakf

3. if there is no executor, the Mutawalli may appoint a successor on his deathbed for the time being.

4, if no such appointment is made, the Court may appoint Mutawalli.

However, it is noted that the Court should not disregard the directions of the founder, with regard to the appointment of the mutawalli, except for the benefit of the endowment. Further, the court has no power to appoint a stranger as a mutawalli, so long as there is any member of the founder’s family who is qualified to hold the office in existence.

As a general rule, a Mutawalli cannot be removed unless there is a breach of trust by him, or when he is incapable of performing the functions due to some physical or mental disability. However, the court or the Wakf board may terminate a Mutawalli.

The Court has the power to remove the Mutawalli in the following cases:

1. When he fails to carry out the instructions of the wakfnama

2. Where he shows adverse title to the property of the Wakf or

3. Where he becomes insolvent or

4. Where he fails to maintain accounts.

The wakf board may remove a Mutawalli under the following cases: