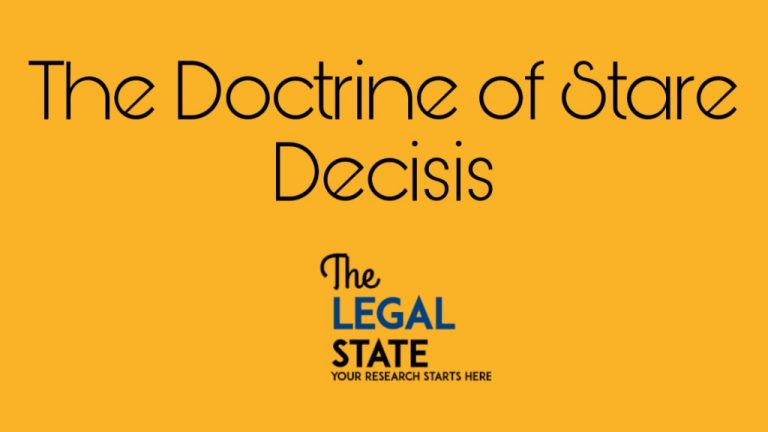 This paper goes into detail about the concept of Stare Decisis with regard to the Indian Judiciary, its history, and evolution from the British Legal System to the current Judiciary in India. It also discusses several cases that are associated with it as well as how it is used in Modern India. The paper has a detailed explanation of what Stare Decisis is according to the Supreme Court of India as well.

Stare decisis is a legal doctrine that obligates courts to follow previous cases as precedence when making a judgment on a similar issue. It is stated as follows: “Under the Stare Decisis rule, a principle of law which has become settled by a series of decisions generally is binding on the courts and should be followed in similar cases.”[1]

In layman’s terms, it means that a court must follow legal precedents set by previous decisions. It is embedded in the Latin maxim “stare decisis et non quieta movere,” which translates to “To stand by what is stated.” It originated from the British court system as the Doctrine of Binding Precedents and is now part of the Indian Constitution as Article 141.

The difference between precedence and Stare Decisis is that any judgment can become a precedence. Still, for it to become part of Stare Decisis, it has to stand against the test of time and be used in several other cases. In other words, it is precedence that has been used for a long duration of time, which is constitutionally valid.

According to the State of Orissa and others vs. Mohd. Hiyas, “the enunciation of the reason or principle on which a question before a court has been decided is alone binding as a precedent.” In other words, the ratio decidendi of a previous case can be applied as precedence on a similar topic.

According to the doctrine, there are two primary rules to be followed: firstly, a lower court in the hierarchy is entirely bound by the decisions of courts that are above it. Article 141 of the Indian Constitution states that “Any law declared by Supreme Court to be binding on all courts within the territory of India.” Article 141 states that only the ratio decidendi of a case is binding and that obiter dicta are not. Therefore, while applying the decision of the Supreme Court to other courts, what is required is to understand the correct principle laid down by the previous decision.

And secondly, higher courts are bound by their own decision in general. They also have the authority to overturn their own decision, as seen in Abood v. Detroit Board of Education of 1977, in the United States and Golaknath vs. the State of Punjab, where the Supreme Court, in 1967. Stare decisis is an important principle, that has been in the legal system for a significant time, across the world. However, it came into the Indian constitution through several factors, which are important to consider.

HISTORY OF STARE DECISIS IN INDIA

Stare decisis has its origins in Greece, Rome, and Egypt, where judges looked to previous decisions for guidance on how to interpret new cases that they faced. It was also in Medieval England and America under the Common Law system. It was codified for the first time as part of English common law. English judges like Henry De Bracton wrote a treatise that supported the idea of this legal precedent in 1256. From 1500, courts began the following precedence as an obligatory practice.

This was further popularized by English judge Sir Edward Coke, who wrote a thirteen-volume treatise called “The Reports”, which was about the importance of legal precedent.

The doctrine of stare decisis appears to not have existed in India during ancient or medieval times. As the British rule in the country came into force, the principle of binding precedent became applicable in India. The British Rule led to the division of courts and the reporting of decisions, which are the two prerequisites for the Stare Decisis. Dorin put forward the adoption of the doctrine of Stare Decisis in India, in 1813.

The British Rule led to the setting up of the Supreme Courts at Calcutta, Bombay and Madras, and Sardar Diwani Adalats. The High Court Act was enacted to provide for the establishment of High Courts by the issue of letters patent, in 1861. These courts had original as well as appellate jurisdiction. And so, a hierarchy of courts was established.

When the Government of India Act of 1935 was enacted, the decisions of the Privy Council and the Federal court binding on all Courts in British India gave statutory recognition to the doctrine of stare decisis. The Federal courts were not bound by their own judgments. After independence, the doctrine of precedence continues to be followed in the country, under Article 141.

While the concept of Stare Decisis states that precedence is key, the Supreme Court is not required to adhere to its own precedents. In Bengal Immunity Co. v. the State of Bihar, dated 1951, the court stated that no provision in the Indian Constitution prevents the Supreme Court from moving away from its own previous decision if it is convinced of its error and baneful effect on public interest. In the High Court case, the high court’s decisions are binding on all subordinate courts within its jurisdiction.

If the courts believe that the prior case does not provide sound judicial footing, it can be overruled, and this concept can be loosened in those instances. The Stare Decisis encourages and requires a review of prior judgments. Despite the fact that the trial court and the appeal court have separate powers, they collaborate to achieve justice. The decision or verdict is regarded as a precedent or judicial decision once the matter is decided. If the precedent comes from a court other than the Supreme Court of India, for example, the United States Supreme Court, it will be examined but not followed.

The Supreme Court generally follows its own decisions, and the lower benches of the courts are bound by the decisions of a higher bench. In rare situations, when a judgment is found the be incorrect, the Supreme Court deviates from it. There are rare situations where the judgments can be overruled as well.[2] There is no provision on the binding nature of High Court Decisions in the Constitution.

By practice, it is recognized that all courts within the territorial jurisdiction of the High Court must follow the decision laid down by the High Court. The decision of one High Court is not binding on another, as seen in Gordhandas Keshavji Gandhi & others vs. the State Of Gujarat. However, the Courts can refer to the decisions for future judgments.

Stare decisis has a significant number of benefits, such as uniformity in the application of the law. It is based on the assumption that the decision made by the Judiciary is constitutionally valid, and therefore, upholds the authority in decision making. It also acts as judicial restraint, preventing judges from deciding cases based on their personal inferences regarding the topic.

The Judicial and legal systems can be made more efficient as it removes the need for courts to interpret and examine the same legal question again over multiple different cases. This also increases the consistency of decision-making, which further increases public confidence in the Judiciary.

However, it does have its drawbacks. It increases rigidity which causes difficulty in modifying the law; it increases complexity because if a principle is not stated clearly, it becomes challenging to find the ratio decidendi of the case. This becomes more complicated as the number of cases increases.

Decisions of the case may be influenced by the case’s particulars, which may not create the most applicable rule of law. This, in turn, adversely affects judicial discretion. It is also considered undemocratic as it violates the principle of separation of powers. The reason for this argument is that the Judiciary is making the law.

However, taking into consideration all that has been said, it is to be noted that the Doctrine of Stare Decisis has become an essential principle that a lot of courts follow for similar cases, thereby increasing the efficiency of dispensing justice.

From the above inferences made, we can see that Stare Decisis has been an important legal principle for hundreds of years, and its implementation of it in the Indian legal system has been a significant development. It has not only saved time and given uniformity in the application of the law, but it has also increased the consistency of decision-making. While it may be undemocratic, the Judiciary using this principle allows for better judgments in less time. Therefore, Stare Decisis is one of the most important principles a court can follow.