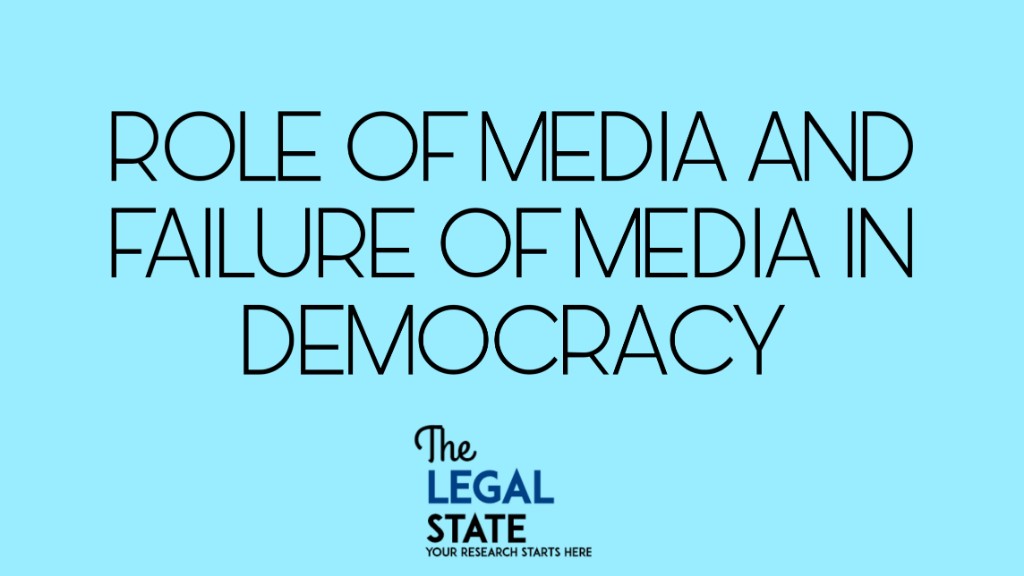 “Press is the watchdog and that even the watchdog may sometimes break loose and has to be punished for misbehaviour”.  Lord Denning, a famous British judge, in his famous book, Road to Justice

At the time we don’t have a free press, anything can take place. What is possible for a tyrannical or any other dictatorial system is so that the people do not know. Media makes us aware of various social, political and economic activities around us. It is like a mirror which reflects us the  truth  and tells the harsh realities of life. A news media be it in print form or, TV, radio its main job is to inform people about real and unbiased news without any censorship or tempering. People always trust actual and honours news first of the medium also has its own thinking at the same time they have to integrate other’s opinions too. Democracy is reckoned to be governance through elected representatives of people.

One of the properties of a democratic arrangement is the freedom of speech and expression and the space that is given to dissent by various groups of society. For the democratic arrangement to driven to its fullest potential, on a part of the public participation is important, which includes regular dissemination of reliable information to the masses on numerous public problems. This is where the mass media infest in. The symbiotic trend among media advertising democracies is concisely altercate. The current state of majority government and media is covered in the article. The most general and common form of media is long-distance informal communication where data about government behaviour and popular government functioning are displayed notably. Pandit Jawaharlal Nehru called media as the “watchdog of our democracy”.

The media has important function to predict and anticipate the issues of the individuals to the society, and to achieve the fundamental rights which elevate in the Constitution. If Media didn’t exist, then Government would govern as per their desire without being accountable to people for what they do. Media is bringing out the political hypocrisies and disclosing the fact in headlines which assist the common man to choose which party can topple them if they come in power. The state is connected to the individuals through the media where they try to influence the individuals.

The Media Democracy Arrangement serves the idea of providing a straightforward, impartial framework by setting standards to transform widespread communication to deliver media and resident news coverage. The explanation for the vote-based arrangement of the media separated itself from private possession is the governmental beliefs of majority rule. Abstractly, the media is an instrument to teach voters, give those facts, news and a balanced view about running and managing a government.

Well informed society should be able to make rational choices, making sure that the government works as the people wants. – Vanessa Alosnos

FUNCTION OF MEDIA IN DEMOCRACY

It generates awareness among people of their rights, exposes its violations and focues attention on people and areas which are in need of the protection of human rights and pursue their case till they achieve them. The media works as a viaduct or bridge between government and the individuals and is also an enormously mighty resource with the potential to make and break opinion of individuals. Democracy cannot succeed in any country without free press. Media which is held as the fourth pillar of democracy, plays an important role in shaping human minds. It shows plain truth and bitter facts as a mirror.

The role of media as secret agent is a crucial supplement to the role of press as people watchdog. The basic function of mass media remains the same, to provide audiences with information they need and want to know for both informative and entertainment purpose. Even now the communication professionals keep belief and confidence on the media to dispense their company’s news to wider audiences.

As Article 19(1) (a) of the Indian Constitution guarantees freedom of speech and expression therefore, media has a strong hold in shaping the public opinion in any way it likes. Subject to the sensible limitation of Article 19(2) of the Constitution of India gives the major right of the right to speak wilfully of discourse and articulation which is referenced in Part III of Indian Constitution.

The compulsion stated in Article 19(2) includes respect, honesty, agreed relations with outside states and open request. The press opportunity is decreasing over the years which was seen in World Freedom Press Index. India positioned 142nd out of 180 in 2021 wherein 2019 India was in 140th position. Looking at the India’s democratic features, the second press commission noticed that press should not be the friend of ruling party but a constructive critic.  Media make aware citizen about the results or consequences of different action of government. Article 19(1) (a) of the Indian Constitutions states that: All citizens have the right to, Freedom of speech and expression. Earlier the first Press Commission in it reports said that:

“Freedom is stated in broad terms and includes not only freedom of speech but also freedom of expression, where expression is communicated by written words. There is no doubt that the freedom of press is a fundamental right and guaranteed by our Indian Constitution.” Although the freedom of the press is provided as a fundamental right, but in India the press has to face a lot of harassment which is seen in many cases. In the Tehelka case, tehelka.com was ordered to shut down and the journalists were assaulted many times because they exposed the truth of the scam in the defence ministry. But instead of the hardships faced by them, the media uproar led to many cases being reopened and judged and the justice served in court.

Although the press and media enjoy the freedom to express their views, these freedoms are not absolute and are subject to limited restrictions. The Supreme Court in Romesh Thappar v. State of Madras, In this case, the entry and circulation of the English magazine “Cross Road” printed and published in Bombay was banned by the Madras Government. This was considered a violation of freedom of speech and expression, because “without freedom of circulation, publication would be of no importance”.

In Union of India v/s Association for Democratic Reforms, the Court held that, Freedom of speech and expression includes right to impart and receive information which incorporates freedom to carry opinion.

It is widely observed that corruption in Indian media has become more institutionalized and widespread.  The growing role of propaganda as a statecraft. A situation is not able to read from or write to a storage device, like a disk or tape, due to a flaw in the recording surface. There is no doubt that the work of media is praiseworthy in exposing the corruption from time to time in making people aware of the harsh realities of life. But now media is losing its path of showing actual problem faced by citizens.

A free society needs a free press, but we rarely reflect on what it actually means to lose the fourth estate. Democracy requires independent, fact-based journalism that gives voice to a wide variety of people, keeps an eye on the powerful and informs members of society. Indian media played a disproportionate role in shaping public views of politics, electoral outcomes and the way power is exercised.

As the current revelations in Radia Tapes reveal, media personalities are running side by side with top level politicians, industrialists and corporate lobbyists and nexus in making chief government appointments and affecting policy decisions. Media has decreased the quality of India’s public discourse. Expansion of media has led to a shrinking of the public sphere, and spread of elitist and socially retrograde values. This is creating a growing, and potentially serious, crisis of credibility. The poor, low and falling quality of Indian journalism is evident in a number of ways. Media now cover baseless story which is irrelevant to citizen’s life.

Presently the issues of employment, corruption, inflation, law and order issues, etc is getting less priority. During the time of covid-19 whole focus of media was on Sushant Singh suicide case- whole night whole month only one news telecast was done by every news agency. India is such a populous and diversified country that its democratic life is difficult to ponder. So the instrument by which political opinions can be expressed is the media. The Indian media is now considered the B team of the government. It is indulged in making such pranks in the society and spoiling the already charged environment with political war games. This theory clearly states the fact that there is always a ‘limit’ to the freedom of speech or freedom to raise slogans if that mischief is likely to cause harm to the society.

In a democracy weakening of any of the pillar is considered as a flaw to the democracy. As we know that media is known as the fourth pillar of democracy. There are many factors that makes media biased. Social media criticism spectrum from the ease of use of specific platforms and their capabilities, there is an actual risk that we will slip into a cunning cycle. In the last few months, the government has found new ways to get a hold of the country’s sub standards digital media. It has announced new ban on foreign investment in digital media, accompanied with approval on a case-by-case basis, and is also proposed to introduce a mandatory registration process for news and current affairs websites.

Broadband internet is restricted and limited data internet access was allowed after a two-month deficit but only for low-speed access to “white listed” sites. By becoming ally of government lead the discredit the media reputation, media house must refrain itself from becoming friend of government. It is very crucial for media to stick on the realistic problem and principal of independence, accountability, transparency, and fairness and impartiality. Government must stop himself from forcing the media to show what government wants.