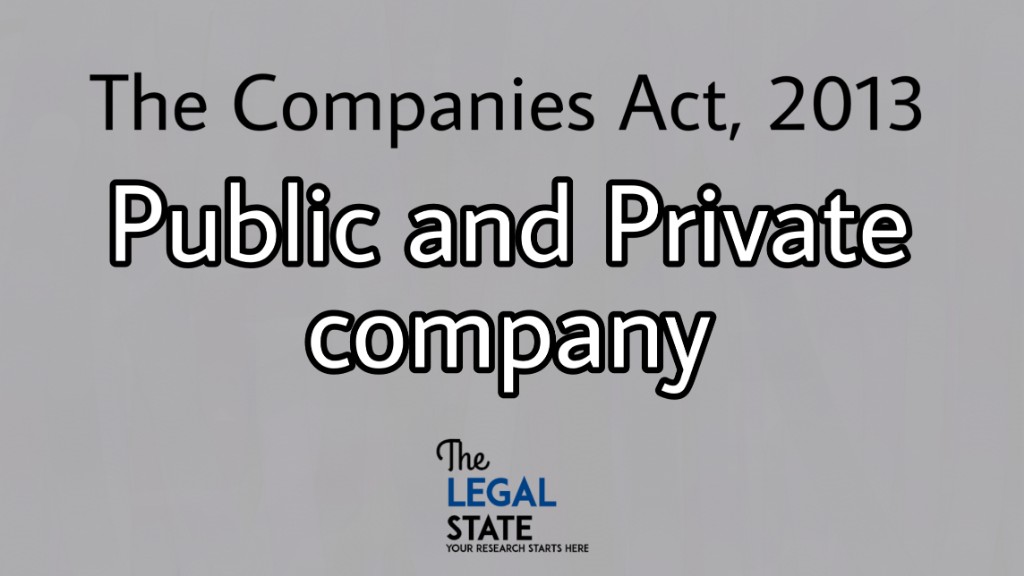 A company is an association of individuals formed generally to carry on some trade or business with a view to making a profit and the division of such profit amongst the members.

(i) “company” means a company formed and registered under this Act or an existing company as defined in clause (ii);

(ii) “existing company” means a company formed and registered under any of the previous companies laws specified below:-

(a) any Act or Acts relating to companies in force before the Indian Companies Act, 1866 (X of 1866), and repealed by that Act;

(1) in the merged territories or in part B States (other than the State of Jammu and Kashmir), or any part thereof, before the extension thereto of the Indian Companies Act, 1913 (7 of 1913).

“company means a company incorporated under this Act or under any previous company law:

According to Section 2(67) of the 2013 Act, “previous company law” means any of the laws specified below:

(A) in the merged territories or in a Part B State (other than the State of Jammu and Kashmir), or any part thereof, before the extension thereto of the Indian Companies Act, 1913; or

(viii)the Portuguese Commercial Code, in so far as it relates to sociedades anonimas;

Thus, a company may be defined as an association of persons formed for the purpose of some business or undertaking, carried in the name of the association, each member having the right of assigning of his shares to any other person subject to the regulations of the Chief Justice Marshall (1819) defined corporation’ as follows: company. A corporation is a person, artificial, invisible, intangible, and existing only in the eyes of the law. Being a mere creature of law, it possesses only those properties which the charter of creation confers upon it, either expressly or as accidental to its very existence.

Lord Lindley defined the term ‘company’ as follows: “By a Company is meant an association of many persons who contribute money or money’s worth to common stock and employ it for a common purpose. The common stock so contributed is denoted in money, and is the capital of the money. The persons who contributed to it or to whom it belongs are the members. The proportion of capital to which each member is entitled is his share”.

The Companies Act, 1956, is mammoth legislation. It contains 658 sections, but the basic principles are very few. The Companies Act, 2013, passed by the Parliament, received the assent of the President of India on 29 August 2013. The Act consolidates and amends the law relating to companies.

The Companies Act 2013, has been notified in the official gazette on 30 August 2013. Some of the provisions of the Act have been implemented by a notification published on 12 September 2013. It should be noted that the provisions of the Companies Act, 1956, are still in force. Until the syllabus is changed adding the portion of the new Companies Act, 2013, students are expected to continue their study as per the syllabus prescribed by their respective universities.

The Act came into force on 12 September 2013 with only 98 provisions of the Act notified. On 27 February 2014, the Ministry of Corporate Affairs (MCA) stated that Section 135 of the Act dealing with corporate social responsibility would come into effect from 1st April 2014. On 26 March 2014, the MCA stated that another 183 sections would be notified from 1 April 2014.

Section 3(1)(ii) defines a private company as a company which by its articles:

(a) restricts the right to transfer its shares, if any;

(b) limits the number of its members to fifty not including-

(i) persons who are in the employment of the company; and

(c) prohibit any invitation to the public to subscribe for any shares in, or debentures of, the company

(d) prohibits any invitation or acceptance of deposits from persons other than its members, directors, or their relatives:

(68) private company” means a company having a minimum paid-up share capital as may be prescribed, and which by its articles,-

(i) restricts the right to transfer its shares;

(i1) except in case of One Person Company, limits the number of its members to two hundred: Provided that where two or more persons hold one or more shares in a company jointly, they shall, for the purposes of this clause, be treated as a single member:

(A) persons who are in the employment of the company;

(iii) prohibits any invitation to the public to subscribe to any securities of the company:

The exception to the above is that where two or more persons hold one or more shares. in a company jointly, they shall, for the purposes of this definition, be treated as a single member. The above definition under the 1956 Act is adopted from the definition of the private company as given in the English Act.

If a company commits default in complying with the above provisions, the company shall cease to be entitled to the privileges and exemptions conferred on private companies. The private company is also a separate legal entity,s entirely different from its members. The minimum number of persons is two in the case of a private limited company.