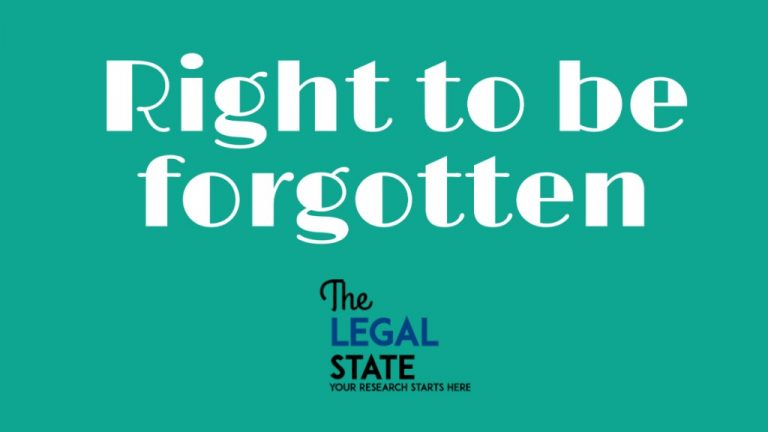 RIGHT TO BE FORGOTTEN

With the world, having stepped into digitalization, each and every piece of raw data of an individual is of vital importance. Since the data available is vulnerable to tampering, there was a need to protect the interests of the individual which led to the enactment of the Information Technology Act 2000. But the sole act won’t suffice the needs for data protection and this laxity may increase data manipulation and data security related issues.

To appease this position, at present, the Data Protection Bill 2019 has been passed by the Lok Sabha which is yet to become an Act. The passing of this bill is a need of the hour because of the prevailing  grey areas in current data protection legislations . These irregularities have led to the creation of a new right – The Right to be Forgotten, also known as Right to Erasure.  The current data protection bill 2019 contains  provisions related to this right which, if passed, becomes an explicit recognition of the Right to Erasure as a Statutory  Right.

An individual has the right to live in seclusion. When a person’s  private life is disturbed by way of his personal data being disclosed  in the public domain,  he has the right to protect his privacy and claim to be forgotten by the internet. This is an evolving right which has gained its importance in recent times and hence it is being adopted by various countries.

In this article, we will have a conspectus of what the right is all about and its stance in both the Indian and International level.

It allows a person to seek deletion of private information from the internet/ online platforms.

This right was first adopted by the European Union in 2014 in the case of  Google Spain v AEPD and Mario Costeja González ECLI.

Background of the case:

In 1998, Mario Gonzalez went bankrupt due to which he had to sell his property by way of auction. This news grew insidious which severely ruined his reputation among the public despite his recovery from such a languishing situation.

The European Court of Justice ruled against the search engine Google that, under certain circumstances, individuals  can have their personal information obliterated from  public records thereby favouring the petitioner.

Ultimately, this case gave birth to a new right called, Right to be Forgotten.

With the evolution of cases and judgments from time to time, the Indian courts have in some cases held that the right to erasure or the right to be forgotten is encapsulated in the right to privacy which is an implied fundamental right.

An individual’s information shall be available on the online platforms by many ways.

Cases where the individual is a notable personality:

The petitioner , a cine fame filed a writ petition against the search engine for displaying his past crimes which  no longer needed to be known by the public, to be obliterated from the internet. Every individual has the right to personal life and liberty as well as the right to live with dignity under Article 21 of the Indian Constitution and that the courts should take serious cognizance of this, as it is inherent in the freedom of an individual.

General claims by the affected parties is that once a person has undergone  punishment for whatever the crime committed, he should not be haunted by his bitter past. Instead, a chance to turn a new leaf must be provided for him to start afresh.

A  citizen has the right to safeguard the privacy of his own, his family, marriage, procreation, motherhood, child bearing and education among other matters which was held in the case of R. Rajagopal v. State of T.N . No one can publish anything with regard to the above matters of concern, whether its laudatory or defamatory.

Though there is no explicit recognition of the Right, the Delhi High Court in a recent case of Jorawar Singh v. UOI  has decided and pronounced the verdict only on the basis of the Right to be Forgotten.

Also Read: VALIDITY OF AN EX-PARTE AD-INTERIM ORDER BY AN ARBITRAL TRIBUNAL

Facts of the case:

Petitioner, an American Citizen who was convicted under NDPS Act was later on acquitted by the trial court. But, when he went back to the USA, he wasn’t given a job despite  his befitting qualifications, because of his past suits.

He sent notices to Google India Ltd, Google LLC, Indian Kanoon and V Lex out of which    V Lex withdrew its contents against the petitioner whereas the other 3 entities claimed media rights and right to freedom of speech and expression. Therefore he filed a writ petition before the Delhi High Court seeking for removal of his information from online platforms.

Issue: whether a court’s order can be removed from the Internet?

Decision: the court considered between plaintiff’s  right to privacy on one hand and the Public’s Right to Information and preservation of transparency on the other hand.

The court recognized the right to erasure under the right to privacy and directed Google India Ltd, Google LLC and Indian Kanoon to delete the information of his.

Often the right to privacy and the right to freedom of speech and expression are at loggerheads,which is a matter of concern.

The media plays a pivotal role in dissemination of happenings of the world. However, growing role of media on the other hand has led to dire consequences. No Right is absolute and so media rights granted under Article 19(1) are subjected to reasonable restrictions under Article 19(2). So a close inspection of news from media should be made to prevent it from misleading the public with its facts.

The RTI includes the basic right of public to demand information from the public authorities and details of governmental bodies. As a matter of fact, the right to erasure shall include not only ordinary individuals, but also the public bodies as enshrined in the GDPR bill 2019, which would undoubtedly jeopardise the right to information of the public.

In the Civil Writ Petition No 9478 of 2016, the Kerala High Court ruled in favour of Petitioner in not disclosing her identity in court orders or any secondary sources as per section 228A of IPC as well as in the context of Right to be Forgotten. Therefore the right to protect the sensitive information of the petitioner shall prevail over the right to information of the public.

A balance of all the rights should be maintained so that the very purpose of bestowal of rights don’t get defeated.

This bill was introduced in Lok Sabha by the Minister of Electronics and Information Technology, Mr. Ravi Shankar Prasad.

The Bill confers certain rights to individuals where, they can seek alteration of their inaccurate data,  restrict the disclosure of data, transfer the personal data to any data fiduciary, and check whether their data has been processed or not.

The bill exempts this general rule under the following circumstances:

(i)if required by the State for providing benefits to the individual,

(iii) in the event of medical emergency.

The EU member countries adopted the general data protection regulation in order to process the data of an individual. A person has the right to live in seclusion and be reticent about his private matters. This right can be used only to the extent that the details of a person are considered no longer necessary to the public or when they are totally irrelevant.

Any person living in rectitude has the right to be secluded  from unnecessary technological attacks which was held in the case of Melvin V. Reid.

Furthermore, this right has been recognized by Australia, UK, Spain, USA, Canada .

TECHNOLOGY IS A USEFUL SERVANT BUT A DANGEROUS MASTER

In the current scenario, technology can be both a shield and a sword. The notion of Data Protection has gained  momentum of importance. So, delay in the passing of the Act may cause cascading effects. It is the role the of judiciary to judiciously harmonise the laws which are like chalk and cheese, based on the facts of every case.

Since an uptick in crimes in cyberspaces is noted, separate tribunals should be set up to deal with those cases irrespective of the cyber appellate tribunal. Apart from the conventional crimes, the judicial members should be imparted some knowledge about techno crimes.  Since computer crimes are easy to commit because of their anonymity and at the same time, collection of  an individual’s data can be done in no time, the passage of the GDPR Act shall do good to the new variety of felonies!