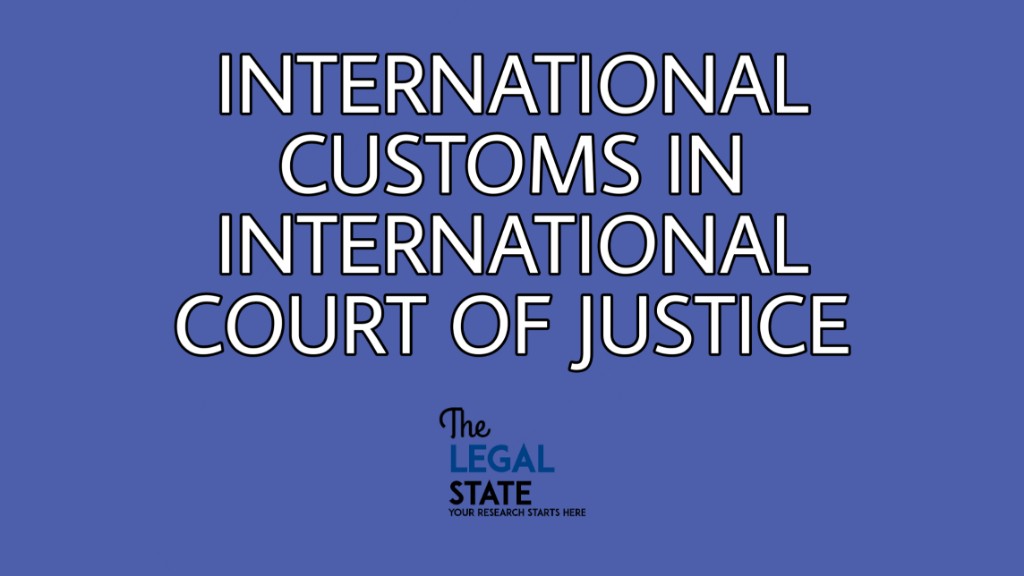 Customary international law is an older source of international law. Usage should not be confused with tradition. In the legal context, custom is more than just a habit or usage; it is a practise that those who observe it regard as mandatory. There must be a sense that if a usage is departed from, any kind of negative repercussions would almost certainly, or at least may, befall the transgressor; in technical terms, there must be ‘sanction,’ but the essence of this need not be too clearly envisioned. When a simple and persistent pattern of performing such things develops under the aegis of the belief that certain actions are, according to international law, obligatory or correct, international custom arises.

In other words, custom is an international pattern of behaviour that has been fully legalised. Usage represents twilight stage of custom. Thus, custom begins where usage ends. In nutshell, custom is such a usage as has the force of law. The development of foreign tradition has been a slow process. When the need is sufficiently evident and immediate, however, it is difficult for new customs to evolve and gain acceptance as law even today. The foreign world has had treaties repealed by tradition at times. In the law of the sea, for example, the Geneva Conventions of 1958 were revoked by universal tradition, which expanded in the 1970s and was eventually codified into the United Nations Convention on the Law of the Sea in 1982.

Customary International Law is based on two sources:

For example- States granting shelter to refugees and asylum seekers who fear for their lives and liberty in their home country.

“The case comprises of two appeals from decrees of the district court of the United States for the Southern District of Florida condemning two fishing vessels and their cargoes as prize of war. Each vessel was a fishing smack, running in and out of Havana and regularly engaged in fishing on the coast of Cuba; sailed under the Spanish flag; was owned by a Spanish subject to Cuban birth, living in the City of Havana; was condemned by a subject of Spain, also residing in Havana. Her cargo consisted of fresh fish, caught by her crew from the sea, put on board as they were caught, and kept and sold alive. Until stopped by the blockading squadron, she had no  knowledge of the existence of the war or of any blockade. She had no arms and ammunition on board, and made no attempt to run the blockade after she knew of its existence, nor did it offer any resistance at the time of the capture.

The court examined State laws and practices, treaties, writings of publicists evidencing usage, and decisions of courts. After detailed investigation, the Court held that these materials uniformly proved the existence of a valid customary rule giving immunity to small fishing vessels, honestly pursuing their calling, from belligerent capture in time of war.”[1]

The Right of Passage Case (ICJ Rep. 1960) shows how a long-standing treaty clause will become a tradition. The case demonstrates that when two States observe a particular matter or procedure repeatedly for a long time, it becomes a binding customary law. The case, like the Asylum case, established that local or regional custom that differs from general customary law is only binding on States that support it.

It is one of the elements required to establish legally binding Customary Law. States codify certain customary practises and recognise them as rules in order to define unanimous customary practises in inter-state relations. According to the doctrine of opinio juris, states are obliged to obey such legislation by ratification.

In Customary International Law, however, the principle of opinio juris is strongly questioned and unsettled since customary procedures differ from state to state, making it impossible for states to agree on a standard practise that they all obey.

“On 2nd August 1926, a collision occurred on the high seas between the French mail streamer Lotus proceeding to Constantinople, and the Turkish Collier Boz Kourt. The Boz Kourt was cut into two, sank, and eight Turkish nationals who were on board perished. When the Lotus arrived in Turkish waters, criminal proceedings were instituted in the Turkish courts against the French officer (Lieutenant Demons) of the watch on duty on the Lotus at the time of the collision. The French government intervened diplomatically on behalf of the officer, and the dispute was eventually submitted to the Permanent Court of Justice by a special agreement signed at Geneva on 12 October 1926 between the Government of the French and Turkish Republics.

The French government contended that there was a customary rule of international law granting exclusive criminal jurisdiction to the State the flag of which a vessel is flying. The Permanent Court of International Justice rejected the contention of the French government by pointing out that the State laws were not consistent, decisions of publicists were divided in their views. The Court explained that even if the facts alleged by France were true, they would merely show that States had often, in practice, abstained from instituting criminal proceedings, and not that they recognized           themselves as being obliged to do so. In the opinion of the Court, it would be possible to speak of an international custom only if such abstention of the State were based on their being conscious of having a duty to abstain. The Court, therefore, arrived to the conclusion that there was no rule of international law in regard to collision cases to the effect that criminal proceedings were exclusively within the jurisdiction and, therefore, each State could exercise jurisdiction in respect of the incident.

The Lotus case demonstrates that the psychological element- the feeling on the part of the States that in acting as they had acted they had been fulfilling a legal obligation – through essential to the creation of a new rule of international law, will only become crucial in establishing the existence of a particular rule when practice relied upon does  not itself point unequivocally to the existence of such a rule. In the Lotus case, even if States had refrained from exercising jurisdiction over crimes committed on the high seas in deference to the flag State, the French government was unable to prove that States had acted in this manner from a sense of legal obligation.”[3]

The ICJ or any other International Tribunal cannot assume a custom as a guiding factor suo moto (on its own motion). Establishing an international custom before such a tribunal is challenging because:

Customary International Laws have existed for as long as humanity has existed; they are the fundamental rules that are primarily based on humanitarian considerations and the idea of natural justice; no laws can be drafted that contradict them.

Warfare between nation-states has dropped substantially as time and technology have progressed, but trade and diplomatic connections between states have skyrocketed.

Customary International Laws have played a significant part in the establishment of diplomatic relations between nation-states, but it is the codification of such standards and their voluntary ratification by states that has significantly changed the international situation.

Furthermore, as the number of states grows, it is very hard to keep up with uncodified conventions and develop a unified approach across the board. The codification of such norms was critical.

This does not, however, imply that customary laws are no longer important. Customary International Laws apply to a far broader range of situations and are binding on all parties. They are the foundation of every international agreement in use today, and any new standard must still adhere to them.