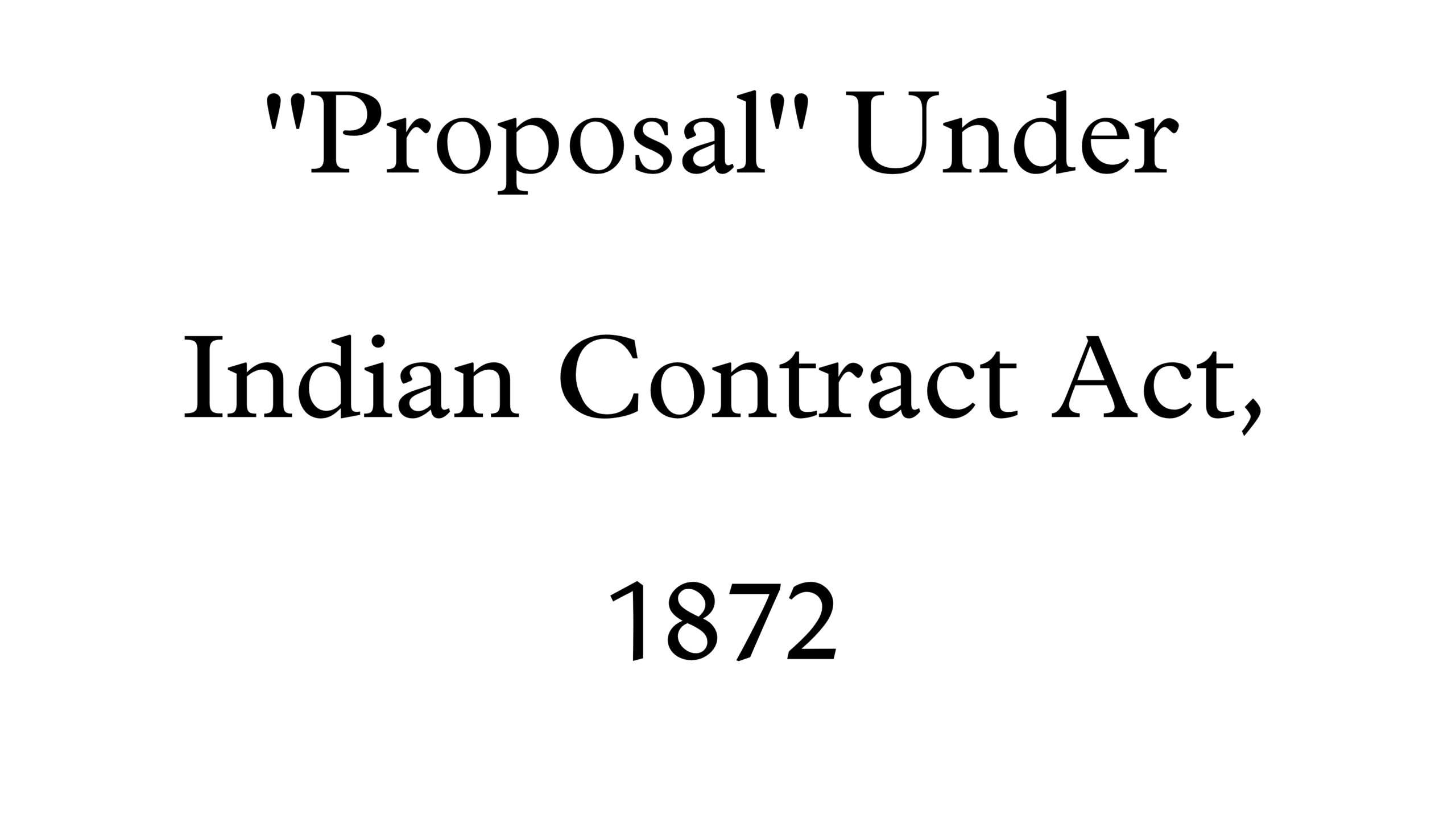 Section 2 (a) of ICA defines a Proposal as:

When one person signifies to another his willingness to do or to abstain from doing anything, with a view to obtaining the assent of that other to such act or abstinence, he is said to make a proposal.

Essentials of a valid Proposal:

The proposal is the Indian use and the Offer means English use.

It becomes paramount that there is an intention to enter into a legal relationship in a contract. Any agreement which does not have any intention attached to it makes it only a social arrangement. The test as to whether or not there was an intention is an objective one. Objective Test means that it is not up to the parties to declare whether or not they had the intention… instead the judges interpret it from the facts of each case to decide whether or not there was in fact the intention to enter into legal relationship. It doesn’t matter what the parties had in mind, what matters is what a reasonable person would think of such an agreement.

# Rose & Frank Co. v J.R. Crompton & Bros Ltd (1923) To create a legal relationship, there must be a common intention of the parties to enter into legal obligations.

# Appleson v. Little Wood The Parties may expressly mention that there is an intention or no intention, or the intention is derived from the nature of agreement.

# Balfour v. Balfour In this case the court held that there was no intention to create a legal relationship and this agreement was merely domestic in nature. It can be observed that most agreements between husband and wife do not extend to enter into a legal relation.

# McGregor v. McGregor In this case the husband and wife had filed a suit against each other and they mutually decided that they will withdraw the suit on certain conditions. The condition was that the husband would pay to the wife certain sum of money if the wife agrees to not pledge the credit. In this case the court decided that there was in fact the intention to create a legal relationship because of which the suit was withdrawn.

# Merrit v. Merrit Husband and wife are joint owners of a house, Subject to mortgage. The husband went to live with another woman and signed a note saying that if the wife clears all the debts, she can then keep the house for herself. This was held to be an agreement with a legal intention attached to it.

# Johnes v. Padavotton A mother called her daughter to live with her in exchange of monthly maintenance of 42 pounds and a place to live, the daughter agreed and she was to study for bar for three years. After 5 years the relationship between two sour and the mother stopped the payment and ask her to go out of the house. In this case, although the judges had different opinions, the majority agreed that this was mere social arrangement with no intention of creating a legal relationship.

Certainty means the definitiveness in the terms of the contract. It is also important that if the terms are uncertain, they should be capable of being made certain – in order for it to be a valid proposal. Example – Ramesh calls Suresh to buy 5 litres of oil for 500 rupees without specifying what kind of oil.

Undue terms are those terms which a reasonable person would not put in the offer and has the effect of putting the other party in a disadvantages or prejudice position. This includes illegal, invalid, impossible or other similar terms.

# Felthouse v. Bindley Felthouse had a conversation with his nephew about buying his horse. After the discussion the uncle sent a letter stating that if the nephew does not say anything concerning the horse, he would consider it accepted and would own the horse. His nephew being busy, did not reply, and sold the horse in the auction. It was held that there was no contract between the uncle and the nephew. There had not been an acceptance, silence did not amount to acceptance, and one does not impose the duty to reject or reply on the other person.

Communication can be done by words or by the conduct of the parties but in order for a proposal to be complete, it must be communicated.

Ans. The offeror or his duly authorized agent.

2. To whom the proposal is made?

Ans. The proposal is communicated when it comes to the knowledge of the offeree

Ans. Revocation is communicated when it comes to knowledge of the offeree.

# Lalman Shukla v. Gauri Dutt (1913) [missing nephew case] Communication can be made either by the party or by his authorized agent but it must move from proposer to acceptor. In this case, the court communication of an offer is a necessary precondition and it is to be accepted by the persons it was communicated to. Communication of an offer could be expressed, by words in person, through a letter, e-mail, phone, etc. or it could be implied by the conduct of the parties like symbols or gestures or sitting in a metro for a certain distance at a fixed price.

Offer can be categorized into the following dimensions:

A. On the basis of the number of people it is communicated to:

B. On the basis of the duration of the offer:

General Offer – The kind of offer that is open for the general public to accept is called an open offer. In such kinds, there is no need for independent communication of offer, which gives rise to doctrine that “An offer need not be communicated to a single person but offer must be accepted by an individual for it to become a contract.”

It obviously doesn’t mean that the contract is entered into with the entire world, but it means that it can be accepted by anyone in the entire world. It is also to be understood that if a couple of people, members of a company or an institute or a specific class is barred from accepting the contract, but, other than that anyone in the world can accept it, it’ll still be a general offer.

# Carlill v. Carbolic Smokeball Company [The Influenza Case] The court observed the following three points for the general offer – 1. Such an offer can be made to the world at large, and the contract is entered into with the person who comes forward and accepts the offer. 2. In such cases, communication of acceptance is not necessary. That performance of condition is a sufficient acceptance without communication. 3. General offer is continuing in nature, and it’s open for acceptance to any number of people until retracted.

# Harbhajan Lal v. Harcharan Lal [Similar to Lalman Shukla] A pamphlet, leaflet, handbill etc. which offer a reward for performing an act and leaves no bargain element is an open offer that can be accepted by anyone until revoked.

Specific Offer – A kind of offer make to specific person or class of person like members of particular family/ Organisation etc. Such an offer can be accepted only by the person or member of the class of persons to whom it was communicated.

Standing Offer – The kind of offer which can be accepted over a period of time unspecified as refer to as standing offer. For example – If I tell you that I want to sell you my car for 5 lakh rupees and you can accept it whenever you want. There’s no deadline for accepting the offer.

Limited Period Offer – You have come across those “limited period sale” haven’t you? This is what they might be (apart from invitation to an offer in some cases). The offer in which the period over which the acceptance can be made is restricted and determined is called Limited period offer.

For example – If I tell you “I want to sell you my house for 1 crore rupees but you have to reply within 10 days”. It will be a limited period offer. It is also important to note that just because a deadline of 10 days has been mentioned, the offer will remain open for 10 days. The offer can be revoked any time before acceptance, it is the acceptance for which the deadline is mentioned.

Counter Offer – When the original offer is rejected and as a bargain, a different offer is further, it is called a counter offer. In this case, there is no acceptance involved. If the acceptance is not absolute and unqualified and it has some modifications or changes then it becomes a counter offer. For example – A says to B “I want to sell you my car for 10 lakh rupees” and B replies “I will buy your car for 7 lakh rupees”.

Cross Offer – It is the kind of situation, where in two identical offers cross each other, in the course of transit. In such kind of offer there is no acceptance. If I send you a letter stating that I will sell you my house for 1 crore rupees and you didn’t know about it. You, on the other hand send me a similar letter to buy my house for 1 crore rupees. Both offers are valid and identical, but none can be considered as an acceptance.

Conditional Offer – Those offers for which a condition precedent has to be fulfilled in order to be eligible to accept it.

The offeror must have expressed his willingness to contract in terms of his offer with such finality that the only thing which is left and to be waited for is the assent of other party. Where, a party, without expressing his final willingness, proposes certain terms on which he is willing to negotiate, he does not make an offer, but only invites the other party to make an offer on those terms.

A shopkeeper’s catalogue of prices is not an offer; it is only an invitation to the intending customers to offer to buy at the indicated prices. All kinds of auctions, invitation of a tender, menu of a restaurant, etc. are also invitations of an offer.

An auction is an invitation to an offer but all the bids made are offers. Similar case is for tenders.

# Pharmaceutical Society of Great Britain v. Boots Cash Chemists ltd. [display drugs case] The display of goods in a shop with a price attached to them is not an offer but only an invitation to offer even if it is a self-service shop.

# Harvey v. Facey [Bumper Hall Pen Case] In this case the court held that no agreement came into being just the defendant never accepted the proposal and never answered the first question of the letter. Acceptance to offer only arise where there is a willingness to enter into a contract. Mere Quoting of the price can be treated as an invitation and not as acceptance.

# Union of India v. Madala Thathaiah In this case it was held that a tender is an invitation to offer and it can be revoked or cancelled even after the proposal has arrived.

# Haridwar Singh v. Bagun An auction is an invitation to an offer. In this case, a person may the highest bid but later retract the offer. The other person questions such retraction and the court held that the auction completes on the fall of the hammer and before that the parties have the right to revoke or retract their offer.

How the Proposal can be revoked