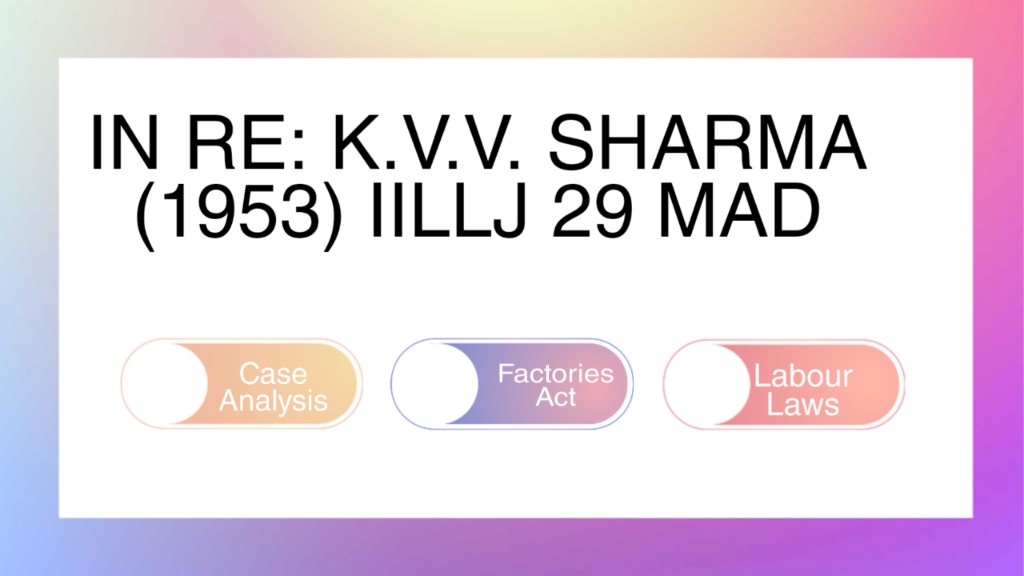 This is an appeal against the Chief Presidency Magistrate’s, for convicting the manager of the Gemini Studio in Madras for violating the requirements of “The Factories Act” and committing an offence under “Section 92 of the said Act.”

It is undisputed that 10 or more people work or were working at the premises in issue on any given day in the prior twelve months, but it is disputed is, that the people engaged are not workers and that the work they are doing is not considered to be a manufacturing process.

FACTS OF THE CASE:

The Act in force that is stated to have been violated is the Factories Act (63 of 1948), yet the studio in issue existed even before the act was established and was registered when the previous “Act 25 of 1934, which was superseded by Act 63 of 1948, was in effect.”

Though every change to an item does not make it a new character or a manufactured product, in this situation, when a raw movie is formed and changed in a finished item, a distinct piece arises from it with a constructive and detailed usage in its new form. It is turned into a new material through the art and talent of numerous people, along with the help of the “camera and sound recording tools”. The transformation of a raw movie into a completed product is a transformation that qualifies as a manufacturing process within the definition of the word. The raw material, which is used for preparing the movie, is any substance, which has to be rendered on the screen of the theatre, after the process of tracing is done, and sound is absorbed whereas the photos are imprinted, such process or change would mean that such change is done in order to adapt any substance for further use.

Even if intellectual or creative labour is hired, if the payment for such labour obtained by the individual involved may be referred to as “wages in the manufacturing process”, then the individual thus engaged is deemed to be a “worker”. The second question is, what does the phrase “premises” including “precincts” mean in Clause (m). Precincts are defined as “an area surrounded by walls or fences.” A factory will not be considered a place where it is utilized for works which are not production process being done in a factory or workshop.” Two requirements must be met for any ‘premises’ to be classified as a factory:

As a result, the process of converting raw film into film display in a cinema theatre is classified as a manufacturing process under “Section 2 (K)”.