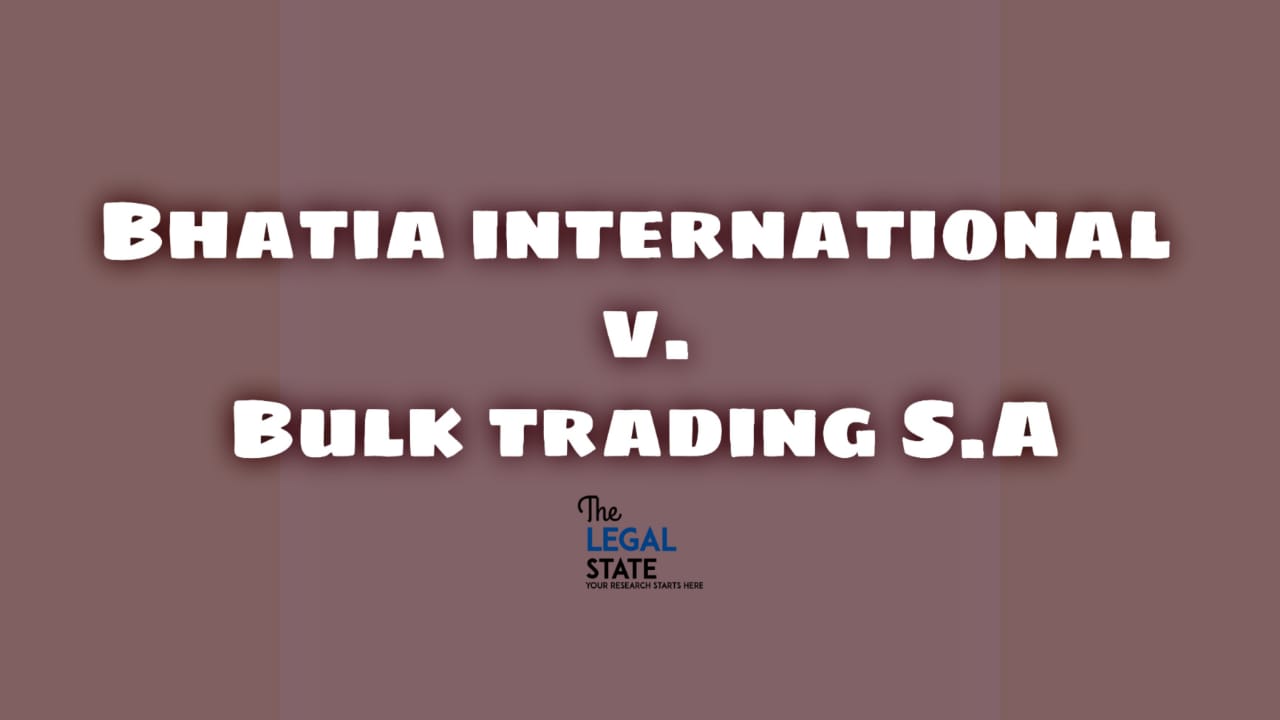 “This case comment is written by Miss. Anushka Hanotiya, a 3rd-year student at United World School of Law, Karnavati University”.

Bench-   This is a three-judge bench case consisting of-

Facts of the case-

Contentions by the parties-

Section 2 in THE ARBITRATION AND CONCILIATION ACT, 1996

This Part shall apply where the place of arbitration is in India.

Section 28 in THE ARBITRATION AND CONCILIATION ACT, 1996

(1) Where the place of arbitration is situated in India, —

The Court observed that by accepting the arguments of the appellant it would mean that the court is holding that the legislature has left a void in the said Act. There would be a lacuna as neither part I or II would apply to arbitrations held in a country which is not a signatory to the New York Convention or the Geneva Convention (non-convention country). It would indicate that there is no law, in India, governing such arbitration. It also leads to an anomalous situation, inasmuch Part I would apply to Jammu and Kashmir in all international commercial arbitrations but Part I would not apply to the rest of India if the arbitration takes place out of India. Furthermore, there can also be an apparent conflict between sub section (2) of Section 2 on one hand and sub section (4) and (5) of Section 2 on the other. In addition to this sub section (2) of section 2 would also be in conflict with Section 1 which provides that the Act extends to the whole of India. A party would be left remediless inasmuch as in international commercial arbitration which take place out of India the party would not be able to apply for interim relief in India even though the properties and assets are in India. Thus, a party may not be able to get any interim relief at all

The words “this Act” in Section 1 of the Arbitration and Conciliation Act, 1996 meant the entire Act. The entire Act applies to the whole of India, except that by virtue of the proviso to Section 1, the Act applies to the State of Jammu and Kashmir only for “international commercial arbitration” held in that State. Because of the said proviso, Section 2(2) of the Act, which states that Part I applies when the place of arbitration is India, cannot be given literal meaning. Giving literal meaning would imply that where “international commercial arbitration” takes place outside India, Part I would continue to apply in the State of Jammu and Kashmir but not in the rest of India. That would be “anomaly”.

The court used the Construction ut res magis valeat quam pereat wchich means where alternative constructions are possible the court must give effect that which will be responsible for the smooth working of the system for which the statute has been enacted rather than the one which would put hindrances in its way. The narrower of the two interpretations which would fail to achieve the objective of the law must give way to a bolder construction paving way for an effective outcome. Interpreting any part of a provision without effect is not permissible.