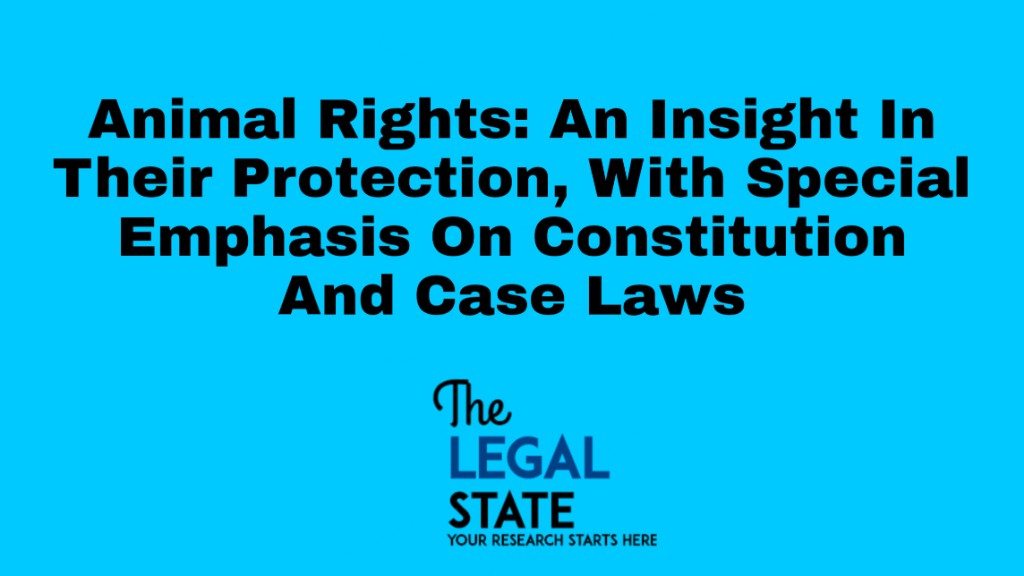 Before I take my explanation to familiarize the concept of animal rights, I would firstly enlist some of the significant incidents that highlighted the world’s attention. The incident was so dreadful that it shook the entire world, so loathsome that whoever comes to know about the incident keeps wondering what might have transpired. An expecting elephant living in the Palakkad district of Kerala was prearranged a pineapple. The fruit was laden with explosives by the local inhabitants. Her jaw had been critically damaged after which she continued roaming being hungry.

The immediate response resulted in consistent pain as she was the mother of her unborn child. Despite being subjected to extreme distress; she did not even think of damaging a single property or attacking a single person. Such inhuman treatment displayed by us formulates embarking questions on the difference between Humans and Animals. In an absolute sense, we are indeed classified as ‘humans’, the highest-ranked HOMO SAPIENS in the animal kingdom and striving across all spheres, excelling in all assorted activities, whether about IT field, medical arena, space, and technology.

Firstly, let us observe the case of Animal Welfare Board of India v A Nagaraja and other courts that formulated a landmark declaration regarding Article 51A(g) of the Indian Constitution. It held the article as the ‘Magna Carta of Animal Rights’ wherein every species is having the right to life and security, and is equally subjected to the laws of the land. As per the Federation of Indian animal protection organization, there were a total of 4,93,910 animals involved in incidents between the years 2010 to 2020.

Also Read: Activism And Wildlife: A Shift In Approach

It is obvious that humans have their set of rights, but the persisting question focuses light on “do animals have rights” has been in debate for a long time. Before proceeding with the explanation of rights, the self-realization aspect makes us realize who these animals are in general? The two main Centralised Laws aiming at similar protection schemes make available the obvious answer to the question.

Consequently, Section 2(1) of the Wildlife (Protection) Act passed in the year 1972 wherein animals in the country take in “amphibians, birds, mammals, and reptiles, and their young include the eggs of birds and reptiles under its domain.” Furthermore, Section 2(a) aims at the Prevention of cruelty to Animals Act, 1960, otherwise classified as a comprehensive definition prevalent as any other human being.

A systematized Common law be familiar with two major types, first the ‘juristic persons’ and secondly ‘property’. It is a common opinion that animals can be put at par with the property as both are identical. The finest instance is present in the IPC (Indian Penal Code) 1860. Furthermore, Section 378 lays down movable property that might arise out of the individual possession without his/her consent alongside dishonest intention. Additionally, Section 4 explains that moving animals are similar to properties and thus takes the concept within its parameters. In real terms, the property can either be bought, retailed, demolished or relocated as per requirement. [1]

Do Animals Have Rights?

The next attempt deals with various rights displayed in animal presence. Some different international codes and conventions have been working towards their protection. For example- The Convention on International Trade in Endangered Species of Wild Fauna and Flora, The Terrestrial Animal Health Code directed by the World Organisation for Animal Health, and The European Convention for the Protection of Animals. Thus, the concluding statement would be that the concept is widely recognized in the global scenario.

The 17th-century roots back the initial traces of animal protection. By the year 1641, puritans that evolved from the Massachusetts Bay Colony had ratified the recognition of ‘The Body of Liberties’ acknowledged officially as the first-anti-cruelty provisions specifically enacted keeping them in mind. Countries including Brazil, China, Egypt, Ecuador, Serbia, and Switzerland have successfully predicted rights under their corresponding constitutions.

At one level, various provision date back to the Constitution of India and subsequently recognize they’re recognized indirectly. Its proper development was manifested by ‘The Prevention of Cruelty to Animals Act, 1960.’ One more enactment was ‘The Wildlife (Protection) Act, 1972. Apart from these specified acts, some additional laws are taking the shape of rules dealing with animal welfare protection.

Some Laws that should be given attention

Any law dealing in non-humane activities should undergo severe penalization with prescribed punishment up to seven years. The Animal Welfare Act of 2011 prescribes animal protection regulations, accordingly, Henceforth, Section 4 states that there needs to be a dedicated animal welfare board of India would be established by consistent efforts of the central government and envisages requirements that address

Section 28 intended to point out that in case a person was found experimenting on animals without prior permission shall be severely punished with fines not less than 20,000 and has the potential of being extended to 50,000 or one-year imprisonment that might extend to three years. Additionally, under section 429 of IPC, the mischief that arises out of killing the animal exhibiting value or any animal up to 50 rupees shall be punished with prescribed imprisonment of either five years or fine or both.

The evident fact that we need specialized laws in different areas, the overall protection of animals must be given desired consideration. At the moment, the bills have been given relevant consideration to certain amendments, but the animal protection laws aren’t on the list.

Moreover, the animal welfare act of 2011 was subsequently presented to replace the 1960 law but could not exert importance in the eyes of Parliament and the 261st report of the Law Commission that eventually laid the importance to create strict laws aiming for animal protection but until now, nothing can be done. [2]

The Constitution of India and The Animal Laws

We belong to a refined society wherein every citizen is provided the responsibility to equally treat the other with ample caring attitude and human spirits. Such compassionate feelings aren’t restricted to humans but need to extend to the way and manner we decide to treat our animals.

Besides, such a moral duty takes shape as a fundamental duty under the COI. Part IV A in particular aims at the statement that agrees on the fact that every individual should responsibly engage in protection and improvement of their natural environment comprising of luscious green forests, lakes, rivers, and enduring wildlife, all of which have consistent consideration for breathing lives.

In the case dated as Gujrat vs. Mirzapur Moti KureshiKassabJamat, the SC had formulated the real symbolization of ‘compassion’ stated under Article 51(A)(g) as an emotion or softened feelings that have the embedded capability in dealing with understanding, love, and kind-heartedness.

In addition, Part IV of the COI explicitly deals with DPSP’s alongside Article 48 and Article 48A simultaneously. The latter states that states are imbibed with the inherent responsibility to accurately organize animal husbandry and safeguard the prevailing wildlife.

The supreme document known as the constitution significantly declares their protection and welfare regulation norms as an important duty after giving governmental influenced welfare the second prioritized requirement. Lastly, in the case of Animal Welfare Board of India vs. A. Nagaraja, the Court presented a much-needed meaning to the already present aspect of ‘life’ further down Article 21 thereby extending the précised dignity and fair-minded treatment.

Persistent jurisprudence stresses animal protection and has undergone a significant shift from an anthropocentric approach to the eco-centric one. Such a landmark judgment is portrayed in the case of Karnal Singh and Ors. V. State of Haryana that came as a revolutionary judgment wherein a decisive organ unlike the judiciary subjected the matter under the utmost purview of FR.

Additionally, in Narayan Dutt Bhatt v. UOI & Ors, it was visibly stated that “We may, therefore, define a person for jurisprudence as any entity (not necessarily a human being) to which rights or duties may be attributed.”

At one instance wherein the entire world seems preoccupied in the clutches of COVID-19 with every other country engaged in research for bringing up appropriate vaccine to put an end to the pandemic like scenario, masses consisting of pests, felines, canines, cottontails are the most vulnerable ones on whom the preliminary trial is frequently carried out. Such an environment exposes innocent creatures through consistent pain and torture in the name of research-based work.

Responding to the crises, the Drugs and Cosmetics Rules (Second Amendment) 2014 was enacted wherein the entire practice of animal testing was practically scrapped out. We cannot display any reluctance at the fact that legislation has been passed meaning much is left to be contributed. The overall legislation that deals with the Indian scenario and vision marks the importance of implementing more stringent laws. [3]