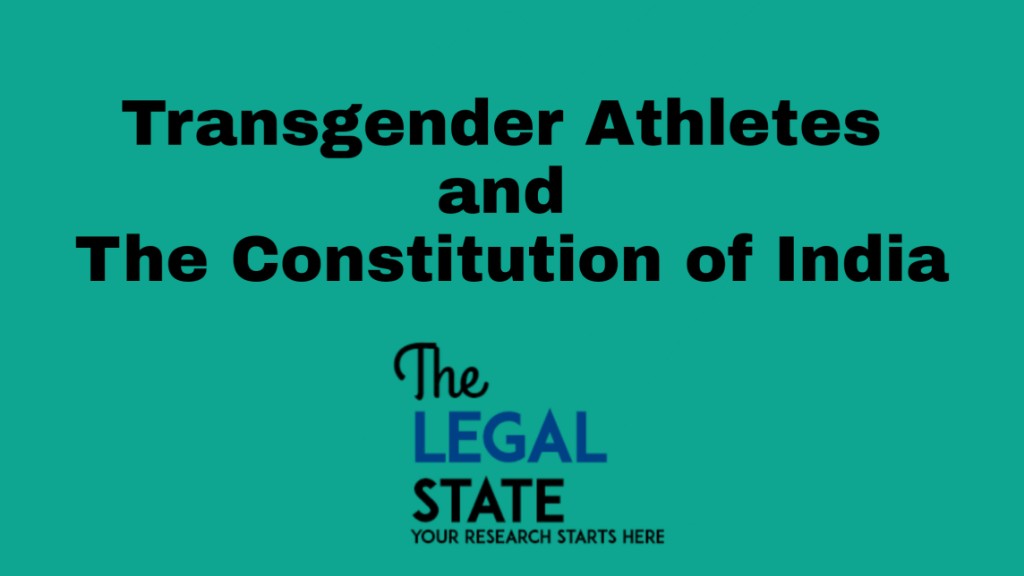 The term transgender describes someone whose gender does not match with the gender assigned to them at birth, i.e., a person who identifies herself as a women but is a male at birth, and a person who recognizes himself as male, but is a female at birth.

The main issue that arises is the understanding of the same, some people know that they are Trans from an early age, but some are unable to identify themselves in this way, and realise this only at a later stage in life. These people, be it athletes or non-athletes often face backlash from the society they live in, even the IOC (International Olympic Committee) is indifferent to them.

Sports encompass values such as brotherhood, teamwork, equality, discipline, fairness and respect. It brings people from every strata of life, where they meet, compete and build brotherhood. However, it has been seen that it also provides a basis for exclusion through its certain undesirable rules and regulations.

Transgender athletes are treated indifferently by the sport fraternity and are made to go through some vigorous checks for the participation process, without their knowing and understanding of the same. An excellent example of this would be the case of Santhi Soundarajan.

The case of Santhi Soundarajan[i] talks about the plight of transgenders in India, Santhi a women from Tamil Nadu, was stripped off her silver medal won at the 2006 Asian games held in Doha, Qatar, after failing a sex verification test, and was considered ineligible in the women competition as she didn’t possess the sexual characteristics of a women.

The Indian Olympic association (IOC) told her to not to compete any longer, without informing her about the type of test she had failed and the Olympics council of Asia couldn’t provide all the necessary laboratory tests required to prove their case against Santhi, this shows the lack of responsibility on their part for stripping an athlete off her medal without any sufficient proof. This led to the violation of her rights, and the government, which is obligated to protect the rights of athletes representing their country, failed to do the same.

Sex verification or gender determination of athletes is done so as to check the hormonal, testosterone levels in athletes, these tests have been in place from a long time[ii], the main reason for the conduction of these tests is to prevent men masquerading as women to gain advantage in sports over other athletes. But there are certain issues of the same, when women athletes are made to go through such tests, they feel isolated, and sense of lack of identity arises, which may lead to depression and sometimes suicide, just like in the case of Santhi Soundarajan, where she attempted to suicide after failing the sex verification test[iii]

Sex testing was first introduced in 1968, and was made compulsory for the female athletes to take this test, until 1988, when it was considered discriminatory (as testing done mainly on females), having flaws, as sometimes the athlete passed one sex test in one competition, but then failed the other one in next competition, just like the case of Ewa Klobukowska (an Olympian), who had passed the sex test in Budapest but then failed it in Mexico[iv].

These tests are conducted on athletes without informing them, they realise it only through the media just like in the case of Dutee Chand[v] where she was taken to the hospital to determine her gender without providing her with the inside story.

These tests violate the right to privacy of athletes as inscribed under Article 21[vi], also they have not been abolished, and can be performed at any point of time, on the athlete when a doubt of gender arises.

Is the testing right or wrong?

Transgender athletes in sports is quite a debatable issue, and controversial especially in regards to the trans women who show higher levels of testosterone levels, it is said that because of these levels they can have supremacy over the cisgender women.

Supporters say that the testing is required to ensure fair competition and fairness between the athletes, also some of the female Olympians felt the need to conduct such tests, but they regarded their understanding on the fact to identify men posing as women, rather than on women who might be a victim to such tests because of certain congenital conditions. Also these tests only provide a proxy for determining the gender, and not exactly the factors that determine a female to be a female genetically. And, some medical experts have dismissed such testing saying these are immoral and unscientific to determine a person’s gender[vii].

Also Read: Article 16 of the Indian Constitution: The Examination of Right to Equality

Article 14[viii] talks about the right to equality under the Indian constitution, but does the sex testing done on athletes promote equality?

These tests are conducted only on female athletes, so as to ensure fairness, because men impersonating as women could dominate the field of athletics whereas female posing as male won’t gain any competitive edge over other athletes, hence male athletes are spared this indignity. This is basically based on the idea of male athletic superiority, hence not based on someone having higher individual capacity, but on sex superiority. But in the 1936 games, Helen Stephens (running for USA) defeated Stella Walsh (running for Poland), and when Stephens was asked to go for sex verification test, she passed. But in 1980, when Walsh was killed, her autopsy revealed that she had male sex organs.

The main criticism that arises is that the sex determination test is mainly conduced on female athletes, creating discrimination, inequality and lack of privacy, unlike doping that is practiced on both male and female. The women participation in sports has been regulated through sex testing, which the medical experts consider immoral, unscientific, having no benefit.

Also rumors, media, testing of the athletes without their knowing can lead to negative psychological repercussions, the athletes feel shame, the feeling of withdrawal from sport – even though it is their means of livelihood, and ultimately the attempt to suicide[ix]. Women who failed these tests were discriminated against whereas the ones who refused these tests, had to face rumours regarding their sexuality.

The best that can be done to support these athletes is to make the government understand that it must fulfil its obligation to protect the rights of its athletes who would bring pride and honour to the country through their achievements, and also the various organisations, committees organising competitions in the national or international levels should not indulge in such unfair rules and regulations, rather than criticise these athletes, support must be provided to them.

[i] Sudeshna Mukherjee, “The curious case of Shanthi: the issue of transgender in Indian sports”, Rupkatha Journal on interdisciplinary Studies in Humanities (2015)