Was it a Happy Republic Day

The national Capital descended into chaos as thousands of farmers protesting against the three laws passed in September to reform the agriculture sector on Tuesday stormed into Delhi’s Red Fort complex after breaking barricades and driving tractors through roadblocks.

Here is an overview of what happened yesterday:

The protesting farmers were to take a tractor rally through three designated routes in Delhi on Day 62 of their protest against the laws. The group of protesters stormed the Red Fort, where one of the protesters climbed the first available flag post and hoisted the Nishan Sahib, the flag of the Sikhs. 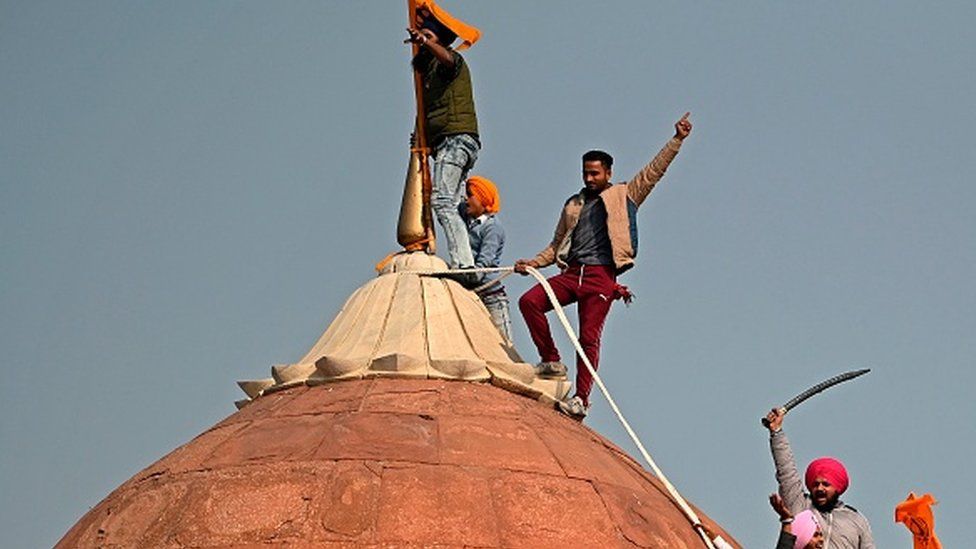 The protesters on tractors rammed through buses and barricades. Men with swords on horses tried to run down policemen as police rushed containers, buses, and barriers to block key roads in central Delhi. A protesting farmer died after his tractor overturned at ITO. A video showed the tractor ramming into a police barricade.

The police fired tear gas shells and resorted to baton charges at several points where clashes broke out. Delhi Police said 83 personnel were injured after being attacked by agitating farmers. Some groups of farmers began returning to their respective sit-in sites in the evening. But thousands could still be seen in several areas including ITO, Nangloi, and Mukarba Chowk.

Visuals also showed people gathered at the Red Fort. Mobile internet services were suspended in three Haryana districts of Sonipat, Jhajjar, and Palwal for 24 hours ending 5 pm Wednesday. Mobile internet was restricted in some parts of the national capital and several Metro stations were also shut down temporarily throughout the day. Delhi Police said that legal action will be taken against those who assaulted police personnel.

We have also Combined a bunch of opinions of young law students and writers.

Opinions on this Red Fort Incident:

One of our best writers Miss Rudrakshi Sharma says that :

For more than a month hundreds of citizens, involving children, worked day and night for the successful celebration of 72nd Republic Day but unfortunately couldn’t keep it for the whole day. Regardless of the hard times faced by the whole country may be with Coronavirus protocols we celebrated the historic day with full enthusiasm.

The parade ending with the remarkable performance of Rafale and followed by the National Anthem gave a sense of belongingness and a wave of patriotism ran from our spine. Few hours after the parade the whole country witnesses a shameful act that breaks our heart and hurts us in our stomachs.

There were people climbing the walls of the Red Fort only to hoist their flag along with India’s tricolor pride. There were instances of violence in many parts of the capital city and many parts witnessed police and the farmers logging heads. Even though a peaceful protest was promised there was nothing but a complete nuisance in the capital city.

Who cares about the person, or groups, behind this act we care about our pride? We don’t care who told you to do that but how could you do it. Which person has no respect for their own flag? No matter how powerful your leader was you are human and not a puppet.

There were many people showing their respect towards the soldiers and the whole country saw the future soldiers in the parade, what message did they exactly receive? Each day they are getting ready to fight for their country and this is what they are risking their lives for. The people fighting each other did not know each other. Both their families were waiting for them to return home safely. Citizens all over the country were shaken by this act.

If this is really a way of showing power, I have to say I am disappointed, because you are bigger than this. You did not hurt any political leader here you hurt your own country’s dignity. It is said that we all had to witness it. Despite so much effort, we couldn’t keep our actions in control.

The parties who were fighting all I want to say to them is one of you takes credit for providing food and the other takes the credit for protecting us from inside, I don’t know if you noticed but if the police stop protecting you, you have nowhere to eat peacefully and if farmers stopped providing you food you have nothing to eat. Weapons used by the parties are authorized to protect humankind and to use for their own selfish reasons.

Both the parties are interdependent yet seem to be against each other. If Indians cannot understand the importance of unity and non-violence, I don’t think anybody else can. After all, it was not for getting printed on notes Mahatma Gandhi took a bullet in his chest and the number of our martyred soldiers keeps on growing.

Miss Tanvi Joshi has the opinion that: Where one of the protesters died in this protest. I believe a peaceful protest should be carried out because by the means of violence and damaging things would only make things harder for them. Understanding the severity of the matter this problem can be solved just by communicating and discussing the problem, which the government is ready to do.

Even though the government should have consulted the farmers before passing the bill because this is something that is done for the benefit of the agricultural sector, it is important to know their best interest. Even though India is a democratic country no one has a right to protest or show their disapproval through aggressive rallies or protests. Having to say I believe let the people decide what’s best for them and not the government.

One of our best editors Mr. Samarth Pathak says that :

The famous Indian freedom fighter, Mahatma Gandhi said, “I object to violence because when it appears to do good, the good is only temporary; the evil it does is permanent”. What happened in New Delhi on the occasion of the 72nd Republic Day of India was truly shocking.

On one side everyone was pledging to inculcate the values of the preamble and the Indian constitution in our lives and on the other hand, we witnessed a violent protest by some of the farmers especially at Red fort. Under Article 19(1) (a) and 19(1) (b) of the Indian constitution, everyone has a right to protest if they are not satisfied by government policies but keeping in mind that protest is non-violent and it does not harm any individual or any property.

According to me, as soon as protest becomes violent, the sole reason behind protest disappears. Different flags were hosted on the tomb of the red fort by the protestors were seen. The manner in which flags of different communities were waived hurts the sentiment and integrity of the nation as those flags were hosted where the national flag is generally hosted.

Protestors entered into the red fort using forces and that without permission. All these things make protests violent, which is in no case acceptable under any law.

Another writer Mr. Mrutyunjay Saramandal has the opinion:

Are we witnessing a Kashmir 2.0?  Or is it too much democracy?

The questions might sound radically supporting the two political extremes, but what the national capital experienced on a very delightful day when the whole nation was busy celebrating the 72nd Republic Day was something beyond appalling for many. The farmers protesting against the 3 Farm Bills clashed with the defense forces and even entered the premises of historically significant Red Fort.

The farmers, on seeking permission, were allowed to hold a tractor parade on specific routes. The parade took a violent turn when the farmers started the parade before the allowed time and crossed the allowed routes, resulting in widespread chaos. It was followed by blocking of the roads from one route, creating traffic jams on the other. A group of Nihang Sikhs scuffled with those in Uniform. It was followed by continuous damage to public property by the protestors.

The police had to resort to draconian measures like tear gas, and baton charging as the only way possible to contain the violence and the brawls. The conundrum left with us is that whether this violence was motivated by some political agendas or it was an inaccuracy on the Defense Forces’ part in maintaining peace on Republic Day itself.

In my opinion, whatever happened at Red Fort is not good for the nation that also on republic day I totally have my stand that violence leads nowhere, The incident that took place on Red Fort is not at all praisable because it is of historical value. Most people have emotion attached to it as it is a cultural symbol of the nation and dignity of our democracy.

but on the other hand, farmers are on borders for more than 50 or 60 days in this freezing cold winter. Why ain’t the government not doing anything? If beneficiaries do not want their benefit, why to coercion them to take it. Let it be the way it was.

Even after 11 meetings with farmers, there has been no solution. The government says it will withdraw the law for 18 months but if laws to be withdrawn why not just reject it and form a new committee and make new law with the assent of every small town and large town farmer.

Coming to media, media was nowhere for 60 days when farmers were protesting peacefully sitting there in freezing winter. Media outrage, false information on social media, rumors are doing around now it’s up to two parties that are farmer’s and Union government to decide on laws as early as possible otherwise this movement can be captured in the wrong way by other counties too.

What I meant to say is any movement or protests lasting long is dangerous for democracy no government should neglect it. And as I said earlier if beneficiaries don’t want their benefits let it be the way it was.

Since the matter is of security at last I would like to say that the incident should be investigated and government and farmers should come up to a solution as earlier as possible so that any such incident and violence doesn’t take place. 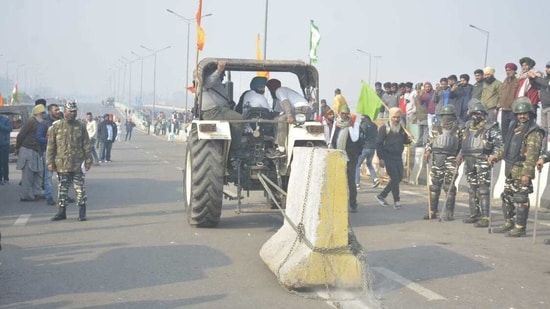 And here are the words of our co-Founder Miss. Anushka Hanotiya:

You live in Delhi? Your city witnessed hooliganism today? Thank the cops who were protecting you as you did not experience half a whiff of it.

“26th January” the day when all of us proudly watch the parade by our army and police officers on television, on that day we saw these so-called “annadaatas” shamefully torturing and assaulting our protectors. We today stand protected because of these officers, now when they need protection from these troublemakers, who is going to protect them??

Red fort is known for the grandeur, now it will also be remembered as a Red Fort where the farmers (as they call themselves) took off India’s National Flag, threw it, and hoisted their own flag. Is this how we respect our country? Is this how a promised peaceful protest conducted?

A day where we see these national guards with utmost respect and gratitude, on that day itself they were disrespected in the worst way possible.

The incident that happened yesterday on the red fort, the iconic 17th-century monument,  is not a symbol of a peaceful protest or a peaceful rally.

The ugliness that happened in different parts of the city was not representative of the movement as a whole. The agitator mob were all out to disrupt the 2021 Republic Day and cause international embarrassment to the Country

Compiled and Edited by