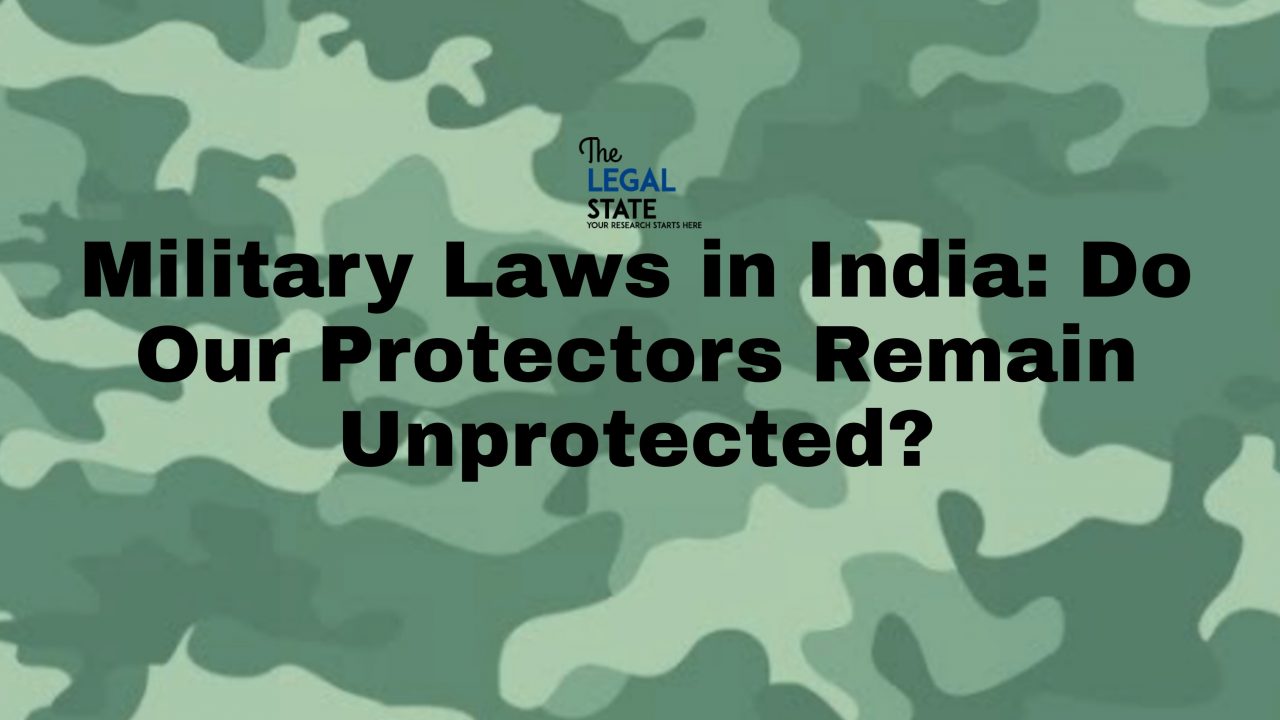 Introduction to Military Laws in India

India is a nation that recognizes and respects the rights and customs of all its citizens. This country’s culturally rich heritage carries the legacy of liberty and equality which is enshrined in our constitution.

Guaranteed to each citizen of this nation, are fundamental rights, that do not see religion, race, sex, or caste. However, an exception that puts us in troubling thoughts is that of our Indian Armed Forces.

The Armed Forces of India are subjected to restrictions under Article 33[1] of the Indian Constitution that allow the parliament to affect their fundamental rights without specifying any just reasons for the same. In a growing society, can we allow the lawmakers to exempt our protectors from the very law that helps protect us?

Trial in the Indian Military Courts

When an incident comes to light, an inquiry begins, leading to a report that decides whether a case goes to trial, followed by a hearing presided over by the commanding officers who hear the accused under the Army Rules, 1954, Rule 22. Following the hearing, he may either dispose of the case or decide to take it further to a trial. After the summary of evidence has been examined by the CO, he may go ahead with a trial by Court Martial[2].

The Judge-Advocate General (JAG), Members and the Presiding Officer precede over the trial. Following this, the arraignment takes place where the accused makes his plea. If the plea is that of not guilty, the trial goes on further.

The institution of court martial after establishing a thorough understanding, appears to be very harsh and inconsistent when compared to civilian law. One of the most alarming features of military courts is the power bestowed upon men of high ranks. It seems rather draconian to have army men make decisions on whether a man goes to prison or not, or if he dies or not. One other observation that becomes very evident is the lack of reliance upon legal sources.

Lawyers must be the sitting judges in a court, even if it is done purely with the military. Since statutory provisions are being referred to pronounce judgements, it is imperative that a lawyer with the apt knowledge of the said acts must be present to decide the case.

The Government in exercise of the powers bestowed upon it by Article 33 has legislated Acts that confirm the unfair exclusion of the Armed Forces from the ambit of Fundamental Rights.

Section 3 of the “Public Forces (Restriction of Rights) Act, 1966”[3] blatantly ignores the safeguards given to each citizen of the nation under Article 14[4] (Right to Equality) and Article 19[5] (Right to Freedom). It seeks to stop the police forces from exercising their “freedom of speech and expression” under any circumstance. It also prevents them from being a member of a union. This kind of a legislation mocks the ideals of “personal liberty” as enshrined in Article 21[6] of the Indian Constitution.

In the case of Ram Swarup v. Union of India[7], an officer, court-martialed under the Army Act of 1950, pleaded before the Supreme Court for the reinstatement of his fundamental rights and pointed out that the military law he was subjected to was opposed to the institution of Fundamental Rights. However, the Hon’ble Court confirmed that the Central Government may, in the “exercise of its powers” under Article 33, restrict the constitutionally-guaranteed fundamental rights of an armed force personnel of the Indian Military.

As a positive note in Sunil Batra v. Delhi Administration[8], it was held by the court that even in the case of restricting one’s liberty, his fundamental rights cannot be absolutely taken away or stripped off.

On an understanding of the controversial implications of Section 30 and 31 of the AFT Act, 2007[9] vis-à-vis the basic structure doctrine/ judicial review (HC u/Art. 226/227)[10], one is forced to ponder over the legislative intent and object behind the said Act. Let us first understand the essence of the relevant Sections.

Section 30 of the Act provides an individual with the right to appeal against an order of the Armed Forces Tribunal (or “AFT”) only to the Supreme Court subject to Section 31 of the Act. Now Section 31 of the Act grants such leave to appeal on the consideration that the Tribunal must first certify that the impugned point of law is one of general importance or one which ought to be considered by the Supreme Court.

A conjoint reading of the above mentioned two section reveals that not only is a person devoid of the right to appeal to the Supreme Court (by virtue of conditions mentioned in S. 31), but one is stripped of the right to approach the High Court u/Articles 226/227 as well. These draconian conditions have encroached upon the basic structure doctrine by restricting the High Court’s power of judicial review over the decision of a Tribunal, which is in the teeth of the decision by the Supreme Court in L. Chandra Kumar’s Case[11] (7 JB) wherein the court categorically held that tribunals can only act complementary to the High Courts, not as substitutes.

Unfortunately, as far as the serving and resigned military persons are concerned, the AFT has left them remedy-less by imposing such a restrictive prerequisite on appeal, i.e., “point of law of general public importance is involved in the decision”, whereas a regular citizens and retired persons on the other hand can easily challenge decisions delivered by the Central Administrative Tribunals (CAT) in the High Court and the Supreme Court thereafter without such being subject to such draconian conditions.

“The universal and absolute law is Natural Justice which cannot be written down, but which appeals to the hearts of all.” – Victor Cousin

The two pillars of natural justice are; Nemo judex in causa sua (Rule against bias) and Audi alteram partem (Rule of fair hearing). These principles are enshrined in the various constitutionally guaranteed fundamental rights (Article 21- “due process of law”/ “procedure established by law” which must be just, reasonable and fair not arbitrary, fanciful or oppressive as held in Maneka Gandhi vs. Union of India) which are available to every person.

However, in the case of the Armed Forces, these golden principles rules are seldom applied. As already discussed above, they have a very slim chance of getting through with an appeal against a decision of the court martial since they have to not only wait for a lengthy process of sentencing and confirmation of the sentence, but must satisfy the conditions stipulated in Section 31 of the Act.

Secondly, the “due process of law” includes the accused’s right to choose a legal practitioner. However, in the Armed forces, quite disappointingly, there is an absence of experienced lawyers or judges with prior knowledge of the laws to judge or defend the accused. Herein the accused’s commanding officer is the one in-charge of performing the task of inquiry, investigation and filing of the charge sheet. In such a case, bias can go either way, it could lead to the acquittal of an offender or even an imprisonment of the innocent. Thus, this also encroaches upon the principle of Nemo judex in causa sua (no man can be a judge in his own cause)

Thirdly, the rule of proportionality seems to be amiss herein since upon comparison with civilians, one can clearly see the disparity between sentences awarded to a civilian who commits a civil crime and an army man who is an offender of the same crime. The latter is imprisoned even in cases of mere civil misconduct.

Thus, these various elements of Natural Justice which lay down the foundation of any just and fair trial system can be said to be missing in the Armed Forces.

Keeping the current state of legislations and recommendations of the Law commission in mind, a serious need for establishment of military appellate courts along with a transparent approach of delivering justice in consonance with the principles of natural justice is felt. Further, the Central Government’s role must increase whereas the commanding officer’s role must be restricted to the minimum to ensure a fair trial free of bias.

Furthermore, civil misconducts ought to be dealt with in consonance with the Civil law applicable to civilians and the right to choose one’s legal practitioner must be respected. Lastly, Article 33, which lies at root of the issue at hand, must be amended or modified to provide the Armed forces with a semblance of the protections enjoyed by civilians.

[6] The Constitution of India, art. 21 Right to Life and Personal Liberty