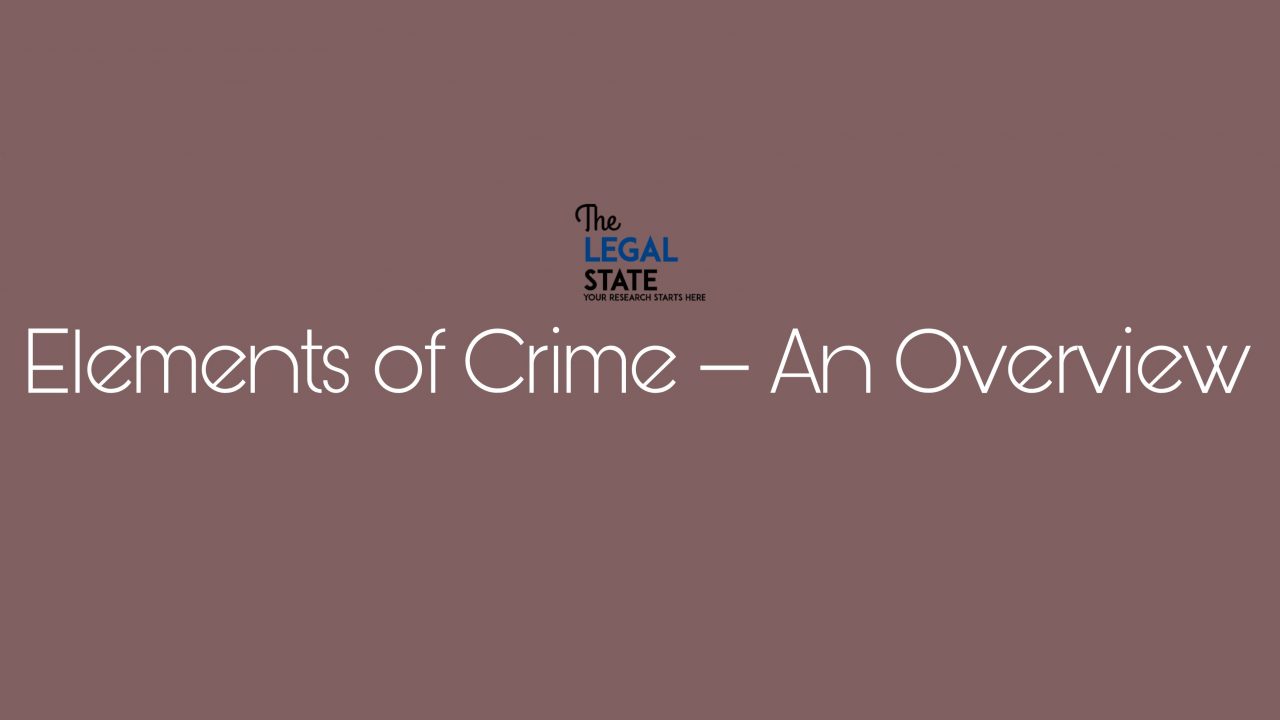 We all are fortunate enough to live in a world that has some laws in place, the importance of laws become evident when we imagine a society where there exist no laws; the result of such an arrangement would be an uncivilized and chaotic society where human life will have no value and discrimination would prevail. The basic aim of laws is to regulate human conduct and acts detrimental to society, especially crimes.

Many legal scholars define crimes as acts prohibited and prosecuted by criminal law[1]. Crime has multiple dimensions, and therefore, it has not been possible to have a standard definition of what exactly constitutes as a crime[2] because of its dynamic nature. But a few fundamental elements of the crime have been identified, which are described as follows[3]

The Mens Reas and Actus Rea are the two components or elements that constitute a crime; apart from these two, two more indispensable elements are needed for a crime to be established that is a human being which is under an obligation to act or omit in a particular way and the last an injury to a third party.

Together these four elements make up a crime[4]. The principle of mens rea and actus rea has roots in the maxim actus non facit reum nisi mens sit rea, which essentially means that ‘an act does not make someone guilty unless the mind is also guilty’[5]. The Indian Penal Code  has incorporated the meaning of this maxim in two ways[6]

Also Read: The Provision of Bail under the Code of Criminal Procedure, 1973

The first element that must be satisfied to constitute a crime is that the act or omission must be caused by a human being and not a non-living person.[7] To understand who is a human , it is essential to read section 11 of the Indian Penal Code, which defines ‘person’. This definition is not narrow and hence includes natural and artificial persons such as companies or associations[8]. Although an artificial person cannot be made liable personally, they can be made liable through their agents[9]. In the case of R Vs. Birmingham . Rly. Co. (1840)[10] a corporation, was held liable for not repairing the highway.

It is a well-known principle of criminal jurisprudence that no person can be convicted of any offence unless the act is done (actus rea) with a mental element (mens rea). Except for cases of strict liability and negligence, almost all the crimes have these two components[12]. No act is criminal per se, it is only a crime when the person does it with a guilty state of mind[13]. The importance of this element is found in the landmark case of Brend Vs. Wood[14] , in which Lord Goddard observed that the court should not find anyone guilty of an offence unless that person has a guilty mind.

Mens rea is a mental state that is a clear indication of culpability[15] and it is considered the most important doctrine in English criminal jurisprudence and is required by the statute to prove that a crime has been committed. Lord Kenyon in Fowler Vs. Padget[16] opined that mens rea is an essential part of the principle of natural justice and that to constitute a crime, both intent and the act must concur.

This most important element is the most difficult to prove, and therefore over time, two tests evolved to establish mens rea or guilty mind[17]. The first test is whether the actor did the act voluntarily, and the second test is whether the actor was able to foresee the consequences of his action. An interesting point here is that there is not a single state of mind that can be applied to all the situations[18] , and even in cases of strict liability, there is a mental element present that takes different names such as malicious, reckless, willfully etc[19].

The IPC does not explicitly mention the words mens rea, but each offence is qualified with a word that must be interpreted according to the context and involves a mental element or guilty state of mind.

Prof. Kenny, who is believed to have coined the term actus rea in his book, defines actus rea as the results of human conduct that the law seeks to prevent.[20]Glanville William, in his book, has given a more comprehensive definition of actus rea, stating that it includes all the external circumstances that are specified in the law as constituting a forbidden situation.[21]Actus Rea can both be an act and an omission.

It is an established principle that the actus rea must be voluntary because only those who did the act or omission voluntarily should be punished. It would be unjust and unfair to punish a person who has no control over his actions though there is no fault on his part.[22]It is believed that an individual’s autonomy would be infringed if a person is punished for crimes that are not ‘his own.’In the context of India, Section 39 of the IPC defines what exactly is meant by ‘voluntary.’

There are exceptions to the cases where the Actus Rea is not voluntary, but still, it is punishable and they are known as ‘situational’ offences because they are not an act/omission but a state of affairs[23]. In R v Larsonneur[24], a French woman was charged with being in the UK despite being ordered to go back even though she was brought to the country by forces beyond her power.

The mere presence of hers in the country was the state of affairs, and hence she was punished. In another case, Winzar v Chief Constable of Kent , a drunk man was charged for being drunk on a highway even though it was due to his eviction from a hospital by the police.

It is interesting to note here that acts of omission attract criminal liability only when the law prescribes duties. The principle was explained in length by the Supreme Court in Om Prakash v State of Punjab,[25]  in which the husband systematically starved and locked his wife for days to the extent that she was reduced to a skeleton. The Supreme court observed that the omission of the husband by starving the wife of food was willful and that it is sufficient from the facts that by withholding the food, death was sure even though it might occur slowly.

In Criminal Jurisprudence, a person cannot be punished for merely having guilty thoughts and therefore, it is necessary to prove actus rea to prove a crime. In R v Deller[26], A induced a person to buy his car by projecting that the car was free from any outstanding financial liability although A had mortgaged his car to some company, but due to some errors in the document, the mortgage was invalid, and A was unaware about it.

The person who was supposed to buy the car sued A for fraud but A was not held liable as although A had a guilty state of mind that is committing a fraud but actus rea was absent here as due to an error the mortgage agreement was not valid.

The last element of a crime is that there must be some injury that is caused to some other person or third party. Section 44 of the IPC defines ‘injury’ and includes injury to the body, mind , reputation etc. Such an injury should be caused illegally to the person. In the Indian Penal Code, the threat to injury is also punishable under three sections – Section 189, 190, 385 and whenever such an injury is inflicted on a person, they are regarded as public wrongs[27].

A crime has a very complex nature, and therefore it is impossible to define it in a straightforward definition. It has many faces and is dynamic, and criminal jurisprudence is evolving with the evolution in our society. Although for a better understanding of the elements of crime, the four elements provide a starting point. Every case of crime is different and therefore, sometimes it is imperative to understand the basics first and then use that knowledge to solve complex situations and cases.

For example, there may be no intention on the part of the accused, but they may be liable under absolute liability. Sometimes there might be situations where the codified law and elements are insufficient to solve them, and therefore there will be some reforms made. It is the right of every human to be free from any injury, and it is the criminal law that plays a vital role in ensuring that.

This article is written by Mr. Rushaan Raana Samuel a Second Year law student at GITAM School of Law, GITAM (Deemed To be) University.