The meaning of the word contempt is to disrespect or disregard, the term contempt of court is elucidated as an act or omission which interferes or tends to interfere with the administration of justice. ‘Oswald’ defines contempt to be constituted by any conduct that tends to bring the authority and administration of law into disrespect or disregard or to interfere with or prejudice parties or their witnesses during litigation.

According to Lord Hardwick, Contempt of Court can be classified under three categories: 1.Scandalizing the court itself, 2.Abusing parties who are concerned in the cause, in presence of the court, 3.Prejudicing the public before the cause is heard. The origin of contempt of court law was from the medieval period, in earlier times the member of the royal family and their subordinates were the sovereigns of the country, they are responsible for all the laws and justice in that country. If any person raised a question against the monarch or his associated member which includes judges, it is like questioning against the god itself because the sovereign is the highest leader of the country, so for that punishment given by the monarch for said offense.

In 1631, a person throws a stone towards chief justice Richardson which narrowly missed him. The person who throws the stone in his hands was cut-off and immediately hanged in presence of the court. A similar occurrence took place in 1634 where a person named James Williamson throws a stone towards the judges on the bench. The offender’s hands were cut-off and fixed at the entrance gate of the court, such brutal kind of punishment given for disrespect or disregard of the kind.

Also Read: Defamation and freedom of the press 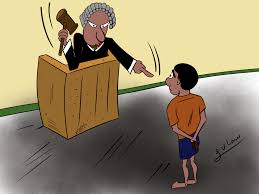 The objective of Contempt of Court

The objective of the contempt law is to protect the justice, and interest of the people and maintain the dignity and decorum of the court. The object of contempt is not to protect any judge from criticism, but by giving punishment to contemnor for the contempt of court the ability to deliver justice is strengthened.

Law for Contempt of court in India

Article 129: – This article declares Supreme Court as a “Court of record” and that it shall have all the power of a court of record including the power to punish for its contempt of itself.[1]

Article 215: – This article declares High Court as a “Court of record” and that it shall have all the power of such a court including the power to punish for its contempt of itself.[2]

Section 10 of the Contempt of Court act gives power to High Court to punish contempt of subordinate courts.[3]

The Contempt of Court Act, 1971 under section 2(a) doesn’t define the word contempt; it explains types of contempt as ‘Civil Contempt’ and ‘Criminal Contempt’[4]

Section 2(b) of Contempt of Court Act, 1971 defines ‘Civil Contempt’ as willful disobedience of any judgment or a decree of a court or a willful breach of any undertaking given to a court.[5]

Section 2(c) of Contempt of Court Act, 1971 defines ‘Criminal Contempt’ as the publication (whether by word, spoken or written or, by sign, or by visible representation, or otherwise) of any matter or the doing of any other act whatsoever which-

If any person by word either written or spoken, or by sign, or visible representation does any act which scandalizes or lowers the authority of the court, prejudice or interferes the due course of any judicial proceeding or interferes or obstruct the administration of justice will amount to criminal contempt.

Scandalize or lower the authority of Court: –

Scandalizing or lowering the authority of the court refers to attacking individual judges in particular or the court as a whole, with or without having reference to a particular case, by casting unwarranted and defamatory accusations against the character or the ability of the judges. This is punished under Criminal contempt of court as it creates distrust in the mind of peoples and therefore it shatters the belief of peoples in the judiciary.

In the Arundhati Roy case, Supreme Court made it very clear that any criticism which undermines the dignity of the court cannot be claimed to be fair criticism and will not fall under the limit of Freedom of speech and expression as guaranteed under Article 19(1)(a) of Indian Constitution. Therefore the Scandalizing the court will not be protected by the fundamental right of Freedom of speech and expression.

Prejudice or interfere with due course of any judicial proceeding: –

A publication that interferes or prejudice with due course of any judicial would amount to criminal contempt. Media trial or trial by the newspaper is not considered proper because it affects the fairness of a trial and likely to interfere with the administration of justice. Any knowledge of the pendency of the case along with reasonable ground to believe that such case is pending is enough to make out criminal contempt, any motive or intention of the publisher for publishing is not important in the case of criminal contempt.

Interfere or obstruct with the administration of justice in any other matter: –

Any conduct which prevents or tend to prevent any party to approach the court, amounts the criminal contempt of court, for example writing a threatening letter to litigation or his counsel to prevent him from appearing in court, writing a letter to judge, or approaching him to influence his judicial conscience, or approaching a counsel for undue influence are examples of interfering or obstructing with the administration of justice and are criminal contempt of court.

Brahma Prasad v. State of Uttar Pradesh, the Supreme Court held that in order to constitute the offense of the criminal contempt of court, it is not necessary to that an actual interference with the administration of justice has committed, the court held that mere defamatory statement which likely to interfere or obstruct with the administration of justice to constitute the criminal contempt of court.

An accused may be discharged or the punishment that was given to him can be abrogated if he apologizes and the apology should satisfy the court then he is exempted from the punishment for Contempt of Court.

Section 20 of the Contempt of Court act, 1971 provides a limitation for actions for contempt. So it means that the court cannot initiate any proceeding for contempt if the proceeding is on his own motion, or after the period of one year from the date on which the contempt is alleged to have been committed.[7]

If any person willfully disrespects or disregard the order of the court, or scandalize or lower the authority of the court, or prejudice or interfere with due course of any judicial proceeding, or interfere with the administration of justice in any other matter committees the offense of the Contempt of Court. The purpose of the contempt law is to protect the justice, and interest of the people and maintain the dignity and decorum of the court. The punishment given to the contemnor for the contempt of court strengthened the ability to deliver justice.

[1] Article 129 of the Indian Constitution

[2] Article 215 of the Indian Constitution