Farm Bills, A Lucrative Carton For The Far-Flung

The three farm bills introduced by the central government have, in their very initial stage, faced immense objection by distinct masses having distinct interests. The farmers from the agricultural dependent state of Punjab are leading the protests on the borders of the national capital demanding a rollback of the laws (1). The political left-wing of India is after the government to rectify an ostensible mistake is made. However bona fide their contentions might sound, they cast aside the inclusion of the interests of the populace of the far-flung, isolated, or rather say the ignored parts of the nation.

The regions like Ladakh and the North Eastern isolated the nation so far have been facing certain hitches like uneven fields, external aggression, border disturbances, lack of conventional farming techniques. The Farm Bills appeared to be a potential panacea for such regions before being put on hold by the Supreme court of India. The reader should get briefed about the bills in order to conveniently understand their possible ramifications in the concerned zones.

This farm bill provides a national framework for contract farming. An agreement can be entered into between the farmer and the buyer for the produce, prior to rearing or cultivation of the crops. It also defines the timeframe for the agreement which has to be kept minimum at one crop season (rabi, Kharif, Zaid) or one production cycle of livestock and has been capped at a maximum of 5 years and more if decided so mutually by the farmer and the buyer.

Keeping the agreement farmer-friendly, certain provisions have been made to predetermine the pricing of the products and a point of reference for any potential increase in the price above the price previously guaranteed to the farmer. In case of exploitation of farmers by the buyers, this farm bill provides for a seemingly robust dispute settlement mechanism. The three levels of the mechanism contain a Conciliation Board, Sub Divisional Magistrate, and an Appellate body.

This farm bill, if it becomes a law, would bring only good to the people of secluded regions. The provisions fixing the prices of the products in advance will assure a certain amount of income for the farmers. A shielded amount of income will encourage the farmers to use conventional methods of farming and hence bring development to the regions. It is self-evident that the regions if they are developed will assist the armed forces in moving through the borders and contain the external aggression to an extent. These changes will prove to be beneficial for the underdeveloped human capital of the regions. 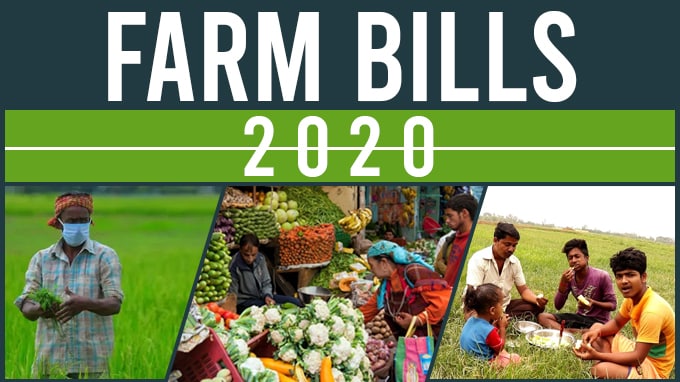 The farm bill allows the farmers to trade outside the allowed trade areas like cold storages, farm gates, factory premises, etc., unlike earlier times when they were allowed to trade only in the Mandis or Yards certified by the Agricultural Produce Market Committee (APMC). It permits the farmers to indulge in intrastate or interstate trade of their produce. The farmers, if allowed to trade their produce to a buyer of their choice, will no longer be a price taker, but will become a price maker as they will be left with multiple alternatives.

The bill also provides for electronic trading of the scheduled farmer’s produce in a specified area. Market Fee, which used to be levied upon by the states on the farmers and was a great barrier, has been abolished by the bill eventually making the inter-state trade reachable and easy for every class of farmer.

The states which are stranded from the mainstream markets of the nation find welfare for their masses, mainly farmers these farm bills. The provisions allowing the farmers to trade outside the circumcised limits of the Mandis where they were coerced to become price takers and settle for the price that the buyers offered them, regardless of how low it used to be. States and Union territories like Sikkim, The Seven Sisters, Ladakh, etc. will be offered a chance to become an integral and a significant part of the mainstream agricultural industry availing the benefits of E-Markets that will be created following the inclusion of the internet in the sector.

Also Read: Punjab: In A Phase of Burgeon or Banjax?

This could develop the regions even to an extent of normalizing direct buying and selling of the farm produce. This empowerment of the farmers of underdeveloped regions will create a spurt in the agricultural sector, eventually bringing development and inclusivity.

This farm bill desired to amend The Essential Commodities Act, 1955. The motive behind enacting this act was to declare certain commodities as essential and regulate their supply by storing their stocks with the government. It was done to limit the hoarding and black marketing of such commodities which would affect the normal course of life.

The central government is also vested with the authority to declare any commodity as essential and regulate its supply and take its essential status back. If a particular commodity is facing scarcity and its prices are roaring, the government can make mandatory certain limits on the amount of stock of that commodity for a specified period of time.

The amendment limits the listing authority of the Central Government to only in the cases of war, famine, unforeseeable price rises, natural calamities, etc. Certain commodities, mainly food items like cereals, pulses, potato, onion, oils, and edible oilseeds are exempted from being regulated under the act.

By deregulating certain commodities, the act will allow the market forces to freely influence the price and supply of these commodities. The farm bill, clubbed with the former two will help the agricultural industry in areas with dwarf and underdeveloped farming sectors to grow in itself and bring development around it as well.

Liberal farming policies are a panacea India’s farmer needs. Secluded regions like Ladakh, Sikkim, the Seven Sisters, and the rest of secluded states falling on national boundaries have not still been considered integral while making policy decisions that do influence the lives of people living in these areas significantly. The farm bills, if implemented will grant the development levels of these regions with the enhancements, they are in a dire need of.