“A healthy man does not torture others it’s generally the tortured who turns into a torturer”. – Carl Jung.

Custodial torture is when an accused under trial or a convict is brutally tortured under the police custody which either leads to death or forceful suicide because death seems like a bed of flowers when they are given electric shocks, nails are hammered into their body, branding with a hot iron on the body, forcing legs apart, insertion of the rod into body parts, application of chili powder or being beaten up hung upside down.

Sounds cruel? Well, this is the reality of the world as it is practiced in almost 90% of the countries whether it is democracy or dictatorship.

Speaking of India itself every year on an average there is 96 custodial death which includes fake encounters,  and one of the common reasons of these tortures are either the accused or the convict belongs to an oppressed section of the society or economically weak or cannot fight against the society due to lack of power.

Stating which does not make them ineligible to any of the rights in the Indian constitution including the right of being protected and provided with food, education, medical facilities, and being treated like a human in the prison.  Many a time the accused is tortured before being brought into custody so that it is easier to deny that the marks on the body of the accused were not caused during the custody and were not the signs of violence by the officials on duty.

Interrogation centers in India are built to prevent terrorism they are also known as the anti-Naxalite action. These centers are allowed to detain a suspect and can interrogate them from several hours to weeks. These centers have killed hundreds of innocent people. India being a part of the United Nations has to apply the same laws as the UN does, in 1975 the UN discussed and made an anti-torture law called The Prevention of Torture Bill.

The same bill was presented in the Lok Sabha in 2010 but the bill is still pending and is yet to be passed. The bill stated that if any public servant tortures any person in his\her custody for extortion of confession it is to be considered as a crime against humanity and he\she can be punished for 3 to 10 years depending upon the severity of the crime committed.

Talking about a topical incident which shows that democracy in our country is declining each second. On January 12th, 2021, a Dalit woman of age 23 named Nodeep Kaur, an activist, joined Mazdoor Adhikar Sangathan, which works for the workers’ rights in the Kundli Industrial Area. She was arrested and charged with an attempt to murder, extortion, and theft which are non-bailable sections 307,384, and 379.

The incident described for her charges was that she along with a mob of people attacked and injured 7 on-duty officers while attempt to extort money from the industrial unit. While in the custody No deep was sexually assaulted by the police officers and the medical examination showed wounds on her private parts. The police denied the facts and said that such things were only circulated on social media platforms and termed them as “afterthought”.

A similar case where the magistrate failed to serve justice to a father and son of age 58 and 31 named Jeyraj and Beniks, were arrested for violating the COVID-19 curfew hours by keeping their shop open. They were tortured and beaten up, and both were dead within 4 days of custody.

Several cases come up daily and at times even the jurisdiction cannot provide justice due to lack of evidence and strong brotherhood between the officers. Even after seeing these cases going without justice the anti-torture law is pending in the parliament for the last 10 years and still has no sign of any progress. 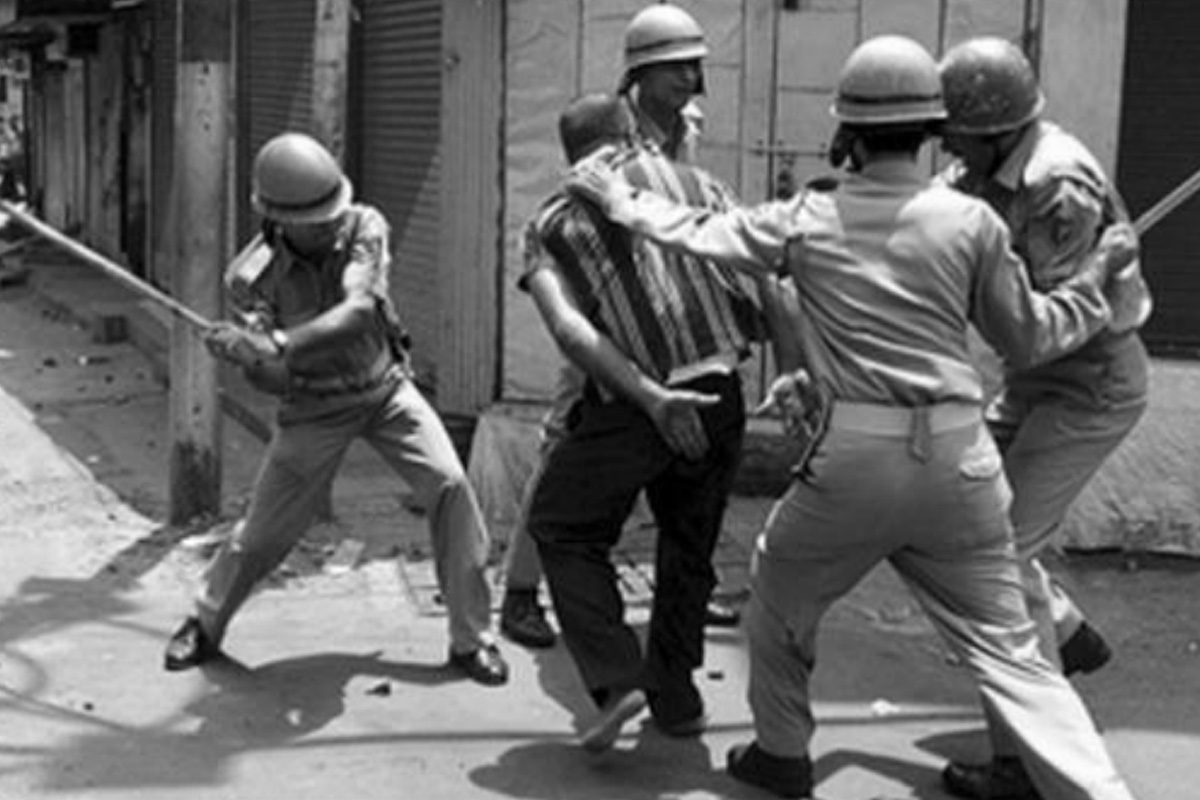 The interrogation centers in Jammu and Kashmir were operated by the border security force from the start of the Kashmir insurgency in 1989 until 1996. Papa II was a center where “large numbers of local people, as well as the occasional captured foreign jihadi, would “disappear.” Their bodies would later be found, if at all, floating down rivers, bruised, covered in cigarette burns, missing fingers or even whole limbs”. According to human rights reporter William Dalrymple.

It was a method of interrogation where the body of the suspect was placed under heavy rollers causing acute renal failure and giving electric shocks, suffocating the suspect underwater, the figure of the death during papa II is still unknown but it is estimated that over 10,000 people went missing. Papa II was shut down after the Supreme Court laid restrictions on the detention centers to control the custodial violence.

Torture is the highest violation of human rights. The main reasons for torture are the lack of technology which leads to rigorous torture till confession and the police being the only medium of access with limited power to the prisoners are left with no option but to torture the people in custody. One of the reasons for torture still existing in India is improper training with piling up of cases with pressures from the superiors to produce the results require early makes the officers use shortcuts.

Not just blaming the police officials but the whole system as looking up from the parliament for not being able to pass a bill for 20 years and protecting the accused officer to the media for the exaggeration of the crime of torture which destroys the whole reputation of the entire executive system even if few are to be blamed, for which the whole executive works as one and chose their reputation over providing justice.

This makes them forget the sole purpose of their duty is to protect the civilians and not treat them as enemy and usage of third-degree torture as an only mean to treat the prisoners. The corruption in the whole system oppresses even the officers who work for the good of society. The non-violent method must be adopted by the system for treating the criminals because you cannot become a criminal to treat one.